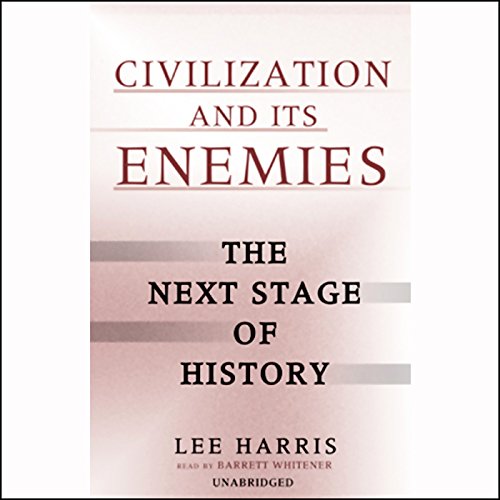 Civilization and Its Enemies

Civilization and Its Enemies is an extraordinary tour de force by America's reigning philosopher of 9/11, Lee Harris. In it, Harris focuses on the next great conflict: the war between the civilized world and the international terrorists who wish to destroy it.

Harris's brilliant tour through the stages of civilization, from Sparta to the French Revolution to the present, demonstrates that civilization depends upon brute force, properly wielded by a sovereign. Today, only America can play the role of sovereign on the world stage, by the use of force when necessary.

Lee Harris's articles have been hailed by thinkers from across the spectrum. His message is an enduring one that will change the way readers think about the war with Iraq, about terrorism, and about our future.

The world as it is; Not as we imagine it to be

This is a very bold and thought provoking book that addresses 9/11 and the future we face. Harris has a hard message for a country possibly gone soft; a message that many modern, progressive Americans will not want to hear.
- Civilized societies like the US 'forget' the hardship, sacrifice and luck that resulted in their stability and prosperity.
- The role of 'fantasy ideologies' has been underestimated, but those ideologies have resulted in the most death and destruction in our time, e.g. Nazism, Marxism, Fascism, Radical Islam, etc.
- Fantasy ideologies judge society to be flawed or defective, and advocate that it can and should be changed. (We hear plenty of this kind of talk in modern America).
- Civilized societies are at disadvantage against 'gangs' of men, who nurse a fantasy ideology, AND who are willing to be ruthless in their pursuit of the ideology. Gang + Fantasy Ideology + Ruthlessness = Threat to Civilization = the Enemy.
- How can a civilized society protect itself from this threat? Read the book and see what you think.

After a century of failed ideologies and societal dead ends (with their gulags, concentration camps, and killing fields) we are actually poised for the next stage of history: the possibility of a utopian society that the world has never been seen. The USA, equipped with its unique heritage and "team" focus which absorbs internal conflict, can/must lead the world through this process. To fail to do so is to turn our future over to those who will believe the world needs to be changed, and who will do anything to make it happen. This would be the price of forgetfulness. There is much else of value in this book, and it can serve as a stimulus for discussion as we look at our past, and as we construct the future we leave to our children.

The narrator is the best I"ve ever heard on an audio book, intuitively emphasizing Harris message with tone and inflection. An impressive production.

Thick and slow but worth it

This is one of only a few books I would recommend reading in print rather than via Audible. While the first and final thirds of the book were lively and provocative, the middle third got so complex and plodding that I had to rewind continuously to "catch up" with some subtle point the author was making.
This piece is not for the faint of heart, which is too bad since that is exactly who needs to read it.
Interestingly, I would recommend it as a management study, as much as a philosophical tome. The sociological lectures in this piece were as illuminating of workplace truisms as they were of geopolitics. I ended the piece with a definite sense that I had learned some things about human nature I had not known before. At the risk of being trivial, this book hits a homerun on several levels.
Surprisingly, this book is less about terrorists than it is about the enemy within; the well-meaning but sloppy thinkers who dominate popular discourse. I particularly appreciated the author's respect for the analytical skills of the reader. With this subject matter it would have been easy to get preachy - something that never happened as the author guided the reader respectfully through his view of the world of human interactions.
Although this was a satisfying read, I think the author missed an opportunity. The first three chapters were absolutely outstanding. I was prepared for a genuine manifesto. It was going somewhere fast. But then the narrative leveled off and wandered onto the plain of "why use 10,000 words, when 50,000 work just as well". But in the end, this is a compliment to the author. I wanted more, much more.

Look where you will, but you will not find a book that better explains the post-911 landscape than Civilization and Its Enemies. It is undoubtedly the best post-911 philosophical investigation into the causes and effects of that seminal event. This awe-inspiring book absolutely soars in its intellectual scope and rare insight. It is also a delightful listen. Rising above ideological constraints, Harris equally indicts both Martha Nussbaum’s cosmopolitan ideals and the NeoCon’s rationale for the Iraqi War. By providing historical context from Hegel’s philosophical treatise on the mind and Francis Fukuyama’s end of history thesis (and many points in-between), Harris provides substantive proofs for his theories.

This book does have its flaws, as any investigation that ranges as far as this one does. Even with its flaws, there is no other book like it—it is a must-read for any modern reader with an interest in how western civilization evolved, but more importantly, will survive.

A truly read worthy book that reveals some of the weaknesses of the "international-liberals" and the naivety of the otherwise so successful liberal Western societies. Peace has always been secured by having the biggest stick and will always need to as this book ruthlessly shows. Pres. Obama&s recent speech for a WMD-free world will easily be seen as the utopia it is in light of this book.

The book does not get fixated with 9/11 as I feared, but instead covers much of the history of man. It might be a bit fixated with the Wests importance in world history as I believe Eastern- and South Asia has also had a great effect on society today but this is just my opinion and I do not require the author to agree with me to give this book the highest grade.

I almost immediately got sucked into the book and finished it within a week.

An obvious must-read for the open minded.

The writer's superficial knowledge of history plus a style reminiscent of a very long freshman essay make this work tedious listening.