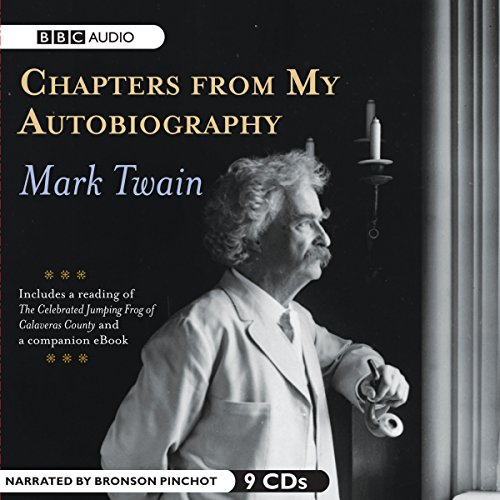 Samuel Langhorne Clemens – who wrote under the pseudonym Mark Twain - was born in Florida, Missouri, in 1835. He spent his childhood in the Mississippi River town of Hannibal, Missouri, leaving home in 1853. His brief career as a riverboat pilot was ended by the Civil War, in which he served as a Confederate irregular. He then traveled to Nevada to strike it rich, and when that plan failed went on to achieve renown as a deft humorist, masterful satirist, great novelist and memorable travel writer, using the name “Mark Twain” – a river pilot’s measurement of depth. Beloved by readers around the world, Clemens died in 1910. Collected here is a wonderful selection of anecdotes from Mark Twain's life, as told with candor by the great man himself. This book is part memoir, part philosophical text, part study in human behavior, from one of America's greatest literary treasures. Narrated masterfully by Bronson Pinchot, this audiobook also includes Twain’s popular short story, "The Celebrated Jumping Frog of Calaveras County", as well as a printable eBook in PDF format.

A great glimpse into American history, as Twain tells his own really interesting story (who knew it was so rich?). I'm not a big history buff, but Twain can tell a story and he's got lots of them, which makes fun! The narrator is really good as well - pleasure to listen to.

I am looking forward to reading the new complete and authorised version appearing on the 100th anniversary of Twain's death, but I couldn't resist listening to this "self-censored" version read with such skill by Bronson Pinchot. Twain's humor is legendary, but here we get a close look at his tender side as well, as he writes about his family. The quotes from his daughter Suzy's childhood biography of her father add special depth and the narrator does an excellent job of communicating how Twain must have felt as he revisited her writings years after her death. The details of his travels, daily life and professional and political considerations are so lively it's hard to believe that he is describing events that took place more than a century ago. Pinchot is wonderfully present too.

I have to admit I was a tad put off that "Cousin Balky" was the narrator, until I began to listen, and without exaggeration, this has to be about the best, most consistent long-term performance I've ever heard. This is probably as close as currently possible to actually sit down in Samuel Clemens' presence and hear him humorously relate hitherto unknown details of his life. Pinchot is that good in his reading. Remarkable feat. The southern-fried accent is never overdone, but more growled and grumbled in a lovable singularity (you can almost smell the cigar smoke). Mark Twain's material is wonderful, as always, but Bronson Pinchot's performance is what both seals and steals this production as an Audible.com classic (and it should win many awards). Heart-breaking in parts, laugh-out-funny in many parts (and that's not the usual review hyperbole), and always historically engrossing, I highly recommend "Chapters from My Autobiography" (and keep your eyes, especially ears, on Bronson Pinchot). Art et Amour Toujours

I don't know what Mark Twain sounded like, but this sounds right to me. Mark Twain was a very successful lecturer, so he must have been entertaining to listen to, this reading is one of the best I have heard in years of recorded books. I hope Bronson Pinchot can work his way through the Twain catalog. He could really make "The Innocents Abroad" come alive.

The book is, as expected, wonderful - humor, drama, pathos. The narration is very well done. I had the opportunity to see Hal Holbrook during his one man show of Twain and didn't think anyone could approach his portrayal of Twain with his drawling twang. However, the narrator enhances the book, you are drawn into Twain's world. Highly recommended.

One of the finest narrators on Audible

Bronson Pinchot takes Twain's words and turns them into a living play. Another reviewer suggested that Twain's real voice was different - high and almost whiny. I couldn't care less. Pinchot doesn't read, and he doesn't sound like he's acting. He sounds like a truly original person reliving a fascinating life, with all its poignant moments, humor, etc. He'll bring tears to your eyes. That person being Mark Twain, much of the writing is beautiful. I read somewhere else that Twain dictated his memoirs verbatim with almost no revisions. Think about this as you listen - it makes the quality of the "writing" even more startling.

I'm a Twain fan. If I had to invite several people from history to dinner Mark Twain would definitely be one. He knows the art of storytelling and can make an amusing story from virtually nothing. That's a little of what this book is - little stories about this or that which happened to him or his family over the years.

The stories are sweet and sentimental and full of love and warmth. I would not say that this is an autobiography in the conventional sense and the author will tell you as much in his opening forward. For a better biography I would read "Life on the Mississippi" which covers most of Twain's early life as a river boat pilot. There are overlaps between the books but the "Life on.." book is much more chronological and orderly about the tales.

I liked this book because Twain has a sweetness and innocence in his style that I think speaks to an age gone by - an age I would have liked to have known. From his stories I like the man. I feel that he was a very generous and kind man and for that I like to listen to him rattle on about this or that. Those that don't feel such a kinsmanship with Twain or that are new to Twain might see this book as a collection of the ramblings of an old man in no real order or sense which could be frustrating.

The real hero in this presentation is Bronson Pinchot. His narration was one of the best I have encountered. The inflections were perfect. Even the tearful reminiscences were so skillfully done that I would swear it was Twain himself recounting these tales to me personally.

Not only are the facts of this American heroes life interesting but the narration of Pinchot made me feel like I was listening to Mark Twain tell me the story from the stage. An easy listen that also shows a simpler but more complex time.

A delightful selection from Twain's autobiography: a selection made by Twain himself, and read here in a wonderful performance by Bronson Pinchot. If you're interested in what Twain had to say about himself, but don't feel up to the full autobiography (which will amount to something like a million words when publication is complete), this is a highly entertaining, diverting, and at times moving, alternative. The selections capture the random nature of Twain's dictation. They shy away from his scathing denunciations of the human race: the emphasis here is on humor, affection, and poignancy. Some of the most affecting moments involve Twain's extensive quotes from a biography of him written by his daughter Suzy, who had been long dead when Twain began the autobiography. Pinchot (as I think somebody else said here) makes it sound like Twain is sitting in your living room, smoking a cigar and holding forth rapturously.

Mark Twain on a far more personal and emotional level.

And Bronson Pinchot's portrayal (because it's so much more than simple narration) is nothing short of Masterful! He draws you in and you being it's Mark Twain himself telling his own story.