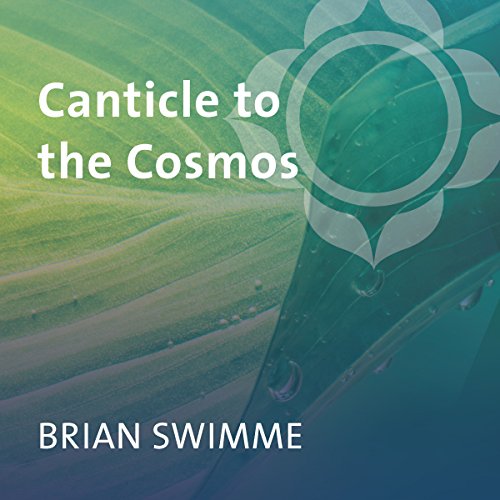 How is it possible that the universe burst into being from the flash of a single fireball? In an age when scientific knowledge is doubling every generation, how do we reconcile the story of the universe with our spiritual roles on Earth? Join noted scientist and author Brian Swimme, PhD, on a journey to the farthest reaches of the cosmos, and learn how this exquisite "molecular dance" of vast galaxies and exploding stars also gave birth to human consciousness and a living earth.

Canticle to the Cosmos is a revelatory session that will open your eyes to the unseen dimension of the universe and our participation in its destiny. In this 12–part audio series, Swimme weaves cosmology, quantum physics, biological science, and native wisdom into a mind-expanding look at fifteen billions years of cosmic history.When Einstein discovered that the universe is constantly expanding, "… he was shattered by what this said to him. He actually changed his field equations to some degree," says Swimme. It is that awe-that "wonder of awareness"–which separates humans from other species and gives us a reason for being.With passion and humor, Swimme shares a scientist's deepest thoughts about the divine order of the cosmos, and explores how we can each regain our reverence for the earth and all life. Canticle to the Cosmos is alive with a rare intellectual intensity, and will escort you across the threshold of science and into the realm of the sacred.

This is a Story About You

This is a story about you, and how your history is so much further back than you could ever imagine. From the birth of the universe to our current daily lives to death, Brian Swimme will satisfy all your wonders and curiosities about life and what it means to be human. It will open your mind to all the obvious facts we have been missing all along. Do not miss out on this amazing opportunity.

If you are at all interested in these topics, just go for it. Swimme presents a refreshing, exhilarating and scientifically sound philosophy in developing a knowledge-based spirituality that demands to a wider audience. A mathematical cosmologist, he knows his science, yet he remains utterly enthusiastic when it comes to interpreting the findings of science for the human race and this planet. He insists that we reorient our cosmology, philosophy and spirituality with the allurement of science.

Now I'm not very good at summarizing his viewpoint, and I was admittedly hesitant to give this audiobook a try because I did not want some pseudo-spiritual New Age garbage. This is anything but. Brian Swimme is in awe of the findings of science, just as he is in awe of the role that we play in the unfolding of the universe. His awe is inspiring in itself, and he is very well spoken. This works in the audiobook because it's his voice with his intonations and passions throughout instead of a third party reader.

This is real philosophy, people. I maintain that you cannot be a true philosopher in our day and age without scientific expertise. How could you? The claim that science has toward truth is far too great to be dismissed, ignored or simplistically incorporated into any philosophical worldview. Philosophy once meant the search for truth. This is what Swimme has clearly given his life to. He's presenting his answers in the human quest for truth that beautifully incorporate scientific, spiritual and planetary aspects. But the science is where it really shines, in particular in regard to the physical creation and expansion of the universe.

As for the audiobook itself, it's actually a series of lectures that Swimme gave, about 45 minutes each. I was not thrilled when I heard this, but Swimme presents frequently enough that his vocabulary is book-impressive and his presentation style is very compelling. Occasionally audience members laugh, but this adds more than detracts from the audiobook experience. Apparently you can purchase the video somewhere as a lecture series, but I didn't feel like I missed out an anything except for maybe one or two images. As a stand alone audiobook, it's simply outstanding.

What a breath of fresh air.

Beyond "big picture" to Whole Picture

Brian Swimme lives, breathes, scientifically comprehends and whole heartedly communicates the most profoundly inclusive vision of Life that I've ever come across. I'm unboundedly and eternally grateful to have found this book.

Brian Swimme has truly raised my consciousness through amazing storytelling! All of our kids should be learning about the history of the cosmos, our Earth and our very important relationship to all.

Inspiring. Poetic. Informed. Brings magic to scientific worldview that retuns us to the consiousness of it all

Considering Swimme has a Phd, his "Canticle..." seems closer to Rasputin than David or Solomon.

Swimme is a very knowledgeable scientist, obviously, and there are some interesting genuinely scientific observations in the book. But mostly it's the sort of meaningless waffle that you'd hear from people who just want to marvel at the universe and have some kind of vague intellectual backup. I found it quite painful to listen to someone so erudite, wasting himself on this tosh.