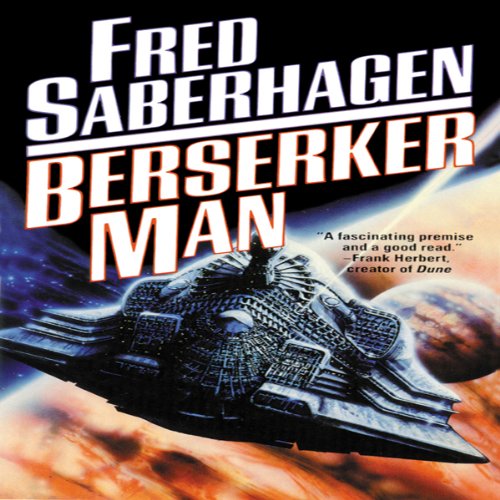 Once, mankind feared the berserkers, killer machines determined to eradicate all life in the universe. But the Berserker Wars are long over and the threat of the sentient doomsday has passed.

The Berserkers are back, stronger and more unstoppable than before. And one strange child, half human and half machine, may be humanity’s only hope—or its final destroyer.

Fred Thomas Saberhagen, a native of Chicago, Illinois, served with the U.S. Air Force then worked as an electronics technician and as an astronomy writer for the Encyclopedia Britannica. He began writing science fiction for Galaxy in 1961. His first novel, The Golden People, was published in 1964. He is most renowned for the Berserker® series of stories and novels. He lives with his wife, Joan Spicci, in Albuquerque, New Mexico.

©1979 by Fred Saberhagen (P)2000 by Blackstone Audiobooks
"A fascinating premise..." (Frank Herbert, creator of Dune)
"The Berserkers - in single-minded pursuit of their pre-programmed course of destruction, they attain a kind of perverse stature that makes them worthy of stand-ins for the dark side of human nature." ( The New York Times)
"Barrett Whitener captures Fred Saberhagen's humanity and emotion. His subtle narration carries each scene in crisp, breathy detail. Science fiction rarely gets better than this as we imagine what it's like to be alone among the stars." ( AudioFile)

The end of the story has commentary about the entire Berserker series books as well as this story in great detail. The reader explains the entire story along with the historical events that this story incorporated.

According to the reader, the Berserker series is NOT like a typical series. Each book is a stand alone story that has little to do with a previous book. Knowing that you can appreciate each story more since it doesnt require a previous book.

This particular story was so great. I found it to be highly original and would rank it amoung my top 10 favorite books from audible. This story will take you beyond the reaches of space itself and leave you with a smile and a sad appreciation for life.

I can see from the other Berserker books that this is NOT the last book written. But, it would seem that this book was originally intended to be the last book of the Berseker saga since it ends the story. Im sure the later books find a way to bring the Berserker saga back.

I highly recommend that you get this book if you've enjoyed any man vs machine fantasies. I always recommend that you read BERSERKERS THE BEGINNING which is a huge compilation of small stories. Each of these stories is described at the end of the BERSERKER MAN book.

A terrific book well worth it's asking price. For some reason though it was only available in the first 3 formats when I bought it (3/2003) and format 3 sounded more compressed (like format 2) than usual. However this slight shortcomming did not distract in any way from my enjoyment of the book. Like I said this a terrific read and I'm sure you will enjoy it too.

Best of the series

I really enjoyed this book, and I think if you are a berserker fan, this is a must. If you have not read/hear any of Berserkers stories this might be a bit confusing at times. Over all a very solid story and enjoyable plot. I loved the commentary at the end as well.

the genius of fred saberhagen

Fred saberhagen captures the malevolence of the berserker threat once again. The messianic rise of the childhood hero archetype is used for good effect. A superbly told conclusion to the berserker series