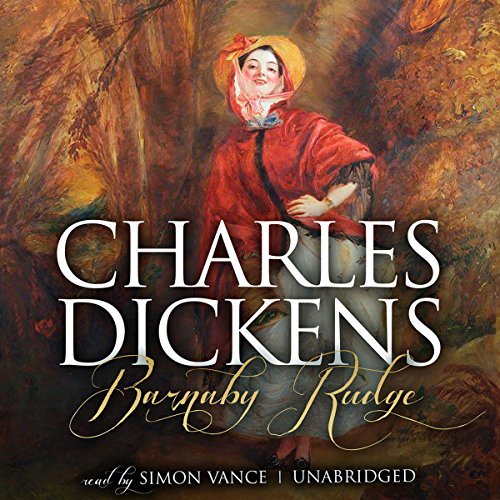 Dickens' first historical novel is set in 1780s England at the time of the Gordon Riots. In a case of mistaken identification, Barnaby Rudge, a pale half-wit with long red hair who dresses all in green and carries a large raven on his back, is arrested as the leader of a mob of anti-Catholic rioters. He is condemned to death on the gallows, but an upright locksmith named Gabriel Varden comes to his aid.

Dickens provides another memorable cast of characters, including the dull-witted, tyrannical John Willet, Dennis the Hangman, and Hugh the savage ostler.

"Barnaby Rudge" is possibly Dickens's least well-known novel among modern readers. Hollywood has ignored it: there's a 1915 silent film version, a 1960 BBC version, and that's it. There are reasons for this: the novel makes an awkward 5-year jump in the middle, sends major characters off-stage for hundreds of pages, and is in general more padded with extraneous material and long conversations than it needs to be. Even if you're a Dickens fan, you might prefer an abridged version as an audiobook.

But the full version has its rewards. Over time, characters who initially seemed flat and stereotyped take on true psychological depth. The best of them are among the best in Dickens--no one has created a better picture of genteel hypocrisy than Sir John Chester, for example. There are magnificent descriptions of 18th-century inns and an imaginative recreation of London after dark, pre-gaslight. And the historical portions, the depiction of Lord Gordon, the rioters, and the anarchy they unleash on London, are as compelling as the better-known counterparts in "Tale of Two Cities".

Whitfield's narration and voice characterization is excellent throughout, despite a couple of annoying idiosyncrasies (notably, the way he handles "Why" as an exclamation). Audio quality of the file is excellent (enhanced format).

Lighter characters are not as prominent as in better known Dickens' novels, so this is not as heart warming as usual; however, I thought it just as good as any Dickens and, as an historical tale, I liked it better than "Tale of Two Cities." There is less domestic melodrama, but the usual Dickens' cast of characters and stereotypes: overbearing-martyr-complex wife, shrew, feral young man, sensible young woman, beautiful but silly young woman, honourable rich young man, put-upon striving poor young man, and not one but two selfish, narcissistic fathers -- And Barnaby. And Grip -- all embroiled in political and social machination.

Dickens' usual insight into human nature is sharp thoughout: "So do the shadows of our own desires stand between us and our better angels" -- No psychologist ever described projection, scapegoating, mob mentality, and political manipulation as well as well as Dickens does in "Barnaby Rudge."

Most characters still live happily ever after in the end, however, as the spoiler in the publisher's summary suggests.

Whitfield's narration is excellent as usual.

(And this is a must listen for all fans of ravens, literary or avian.)

This was a long story, with many characters. I lost parts of the story along my commute as there are numerous conversations with the characters, which didn't appear to have meaning, but come together in the end. I had to relisten to parts of the book to keep up with the story. The narrator was fantastic with his ability to change characters manners and age which is part of Dickens work. I preferred the end of the book much more as that is where the riots and drama evolves. It lacked some of the mystery of his famous classical works like Twist and Great Expectations, but to me the last 20 chapters brought it all together. The characters and accents were excellently done with the likes of Dennis the Hangman, and the Gabriel the locksmith, the idiot Barnaby, and almost human Grip. If you like Dickens you should like this one.

Become a Dickens fan first, then listen to this

There is much of value in this book - the depiction of the Gordon Riots, in particular, is of interest and importance. There are aspects of these riots - violence against a minority instigated by inciteful talk by important people and carried out by the riffraff (and a naive Barnaby Rudge of the title) - that are, sadly, too relevant today. One can understand from these riots how easily it is to rile up a crowd to commit a pogrom in the name of religion with hatred towards others of another religion for no real reason. Unfortunately, Dickens devotes too much of the book to building the stories of the various characters, and much of those stories seem superfluous. In fact, it is not even clear what value the title character, Barnaby Rudge, adds to the main point of the story. He is a “simple” person, often called an “idiot”, of limited intellect, with a devoted mother. Her husband is a fugitive murderer. These three characters (and Grip the raven) could have been omitted, and all that surrounds them (Stagg, Rudge Sr.’s accomplice) without detracting much from what to me are the more interesting aspects of the story. Haredale could be Emma’s ward without the whole additional complications of those characters, and the animosity between Haredale and Chester would be intact, relevant to the story because Haredale (and Emma) are Catholic while Chester (and his son, who loves Emma) are Protestant, but it is a deeper animosity, and I was left puzzled about the actual source of Chester’s treachery. That he is a villain is clear, but why? As always, Dickens’ language and writing is superb, and much of this book is excellent. Simon Vance’s reading is, also as always, superb. If you are a Dickens fan, you ought to listen to this book to familiarize yourself with all his works, and be left with much to contemplate (and many analyses of this book to consider if you agree or not). But if you are not yet a Dickens fan, it is best to start with some of his other books.

Out of all the audiobook narrators I have listened to, including Messrs. Timson & Lesser, Simon Vance is by far the best. He brings every character to life, especially in this one. His reading of Barnaby's speech accurately reflects the character's simplicity of mind.

The comforting literary superfluities one comes to expect in a Dickens novel are present in full force in Barnaby Rudge. A good history lesson peopled by interesting characters and detailed story line. A great book, by a great author, read by a great narrator. What more can one hope for. Highly recommended.

Engrossing at the End

Thisbook was long. ..longer in the beginning than at the end. In the beginning part I wondered if the author had had the benefit of an editor. Realizing that most of these books were published in weekly magazine installments, I am sure that this one netted a great profit. The story does grow on you as it goes along and gives quite an insight into what might have happened during those historical riots.

I almost didn't listen to this book based on all the reviews. One reviewer stated that if you love Dickens, you need to read/ listen to this. I'm so glad I did. Dicken's writing is amazing. This story may go on and on here and there at times, but it's a beautiful trip. Absolutely 5 star. Also, Simon Vance, 5 star as well!

"Barnaby Rudge" is a very good but less known Dickens novel. It is a historical novel set in 1780. Dickens tended not to author historical novels. I liked it, but can understand why it is a lesser known novel.

In that this is an audiobook, I want to state that the narration is excellent. The reading by Simon Vance is very good. Mister Vance has a real knack for capturing the comedic aspects of this novel.

As for the story itself, it is like all Dickens novels, well written. It is an historical novel, which is not the normal Dickens venue. This story develops slowly which honestly frustrated me. I knew all along that Dickens would tie it together but it seemed to take forever to really get going. But this is a story that the longer I read it, the more I liked it.

I am glad that I read this novel. Simon Vance is very good. The story starts slowly. In the end I am very glad that I stayed with it. Thank You...

This is one of two historical novels of Dickens. It is about the Anti-catholic riots in the time of King George III. The story is long but interesting.

The narration and story are excellent, but there are a number of faults in the recording in the second the third files. These have been reported to audible (they have verified and acknowledge that there are errors in the files) but I see that they continue to have this for sale. Please note that, if you choose to buy this, it will not be perfect. You will be able to listen to the whole story but there will be jumps in the narration at places. I have given one star to draw attention to this problem.

Love this book so much.

enjoyed the book and will spoken. the story starts off slow, but plenty of characters to keep you interested and soon pick s up pace

to be honest, this Dickens needs a bit of editing. Nothing wrong with the performance, although Miggs and Mrs Vardon are particularly irritating, but it takes a long time to get going. The riot scenes are excellent and there are good twists and turns; but not my fave!

A clever, informative story, slow to get going

Great narration by Simon Vance throughout and an entertaining and informative story. Some great satire, observations and philosophy and some tense, exciting action. Just takes a while to get going compared to some other Dickens stories