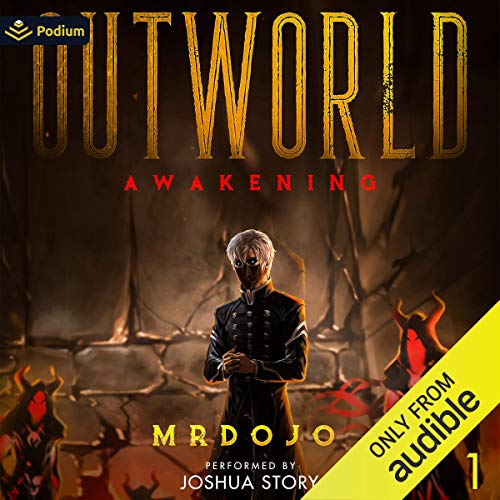 What do you desire in exchange for your soul? Everlasting youth? A million dollars? Women? Power?

Bored high-schooler Adam Staples wants for nothing. Such an offer could only be a prank, right? Who would have thought that the prankster is a demon in disguise?

After selling his soul and turning into a half-demon, Adam finds himself orphaned and dragged into a realm outside of the world he knew. Training under his benefactor and enrolling in a school made for those who were gifted with powers, Adam ventures around the Outworld to hunt down the demon that turned his life inside out...and perhaps to squash a bit of the guilt he carries for what he had done to his family.

Dragonball Z for your ears

Honestly, my headline sums up everything about this book. To start off, other than some semblance of LitRPG theme, there’s no real structure to the main characters build, not a real explanation, The main character is your typical overpowered almost anti-hero with little to no depth. Same thing with the other characters, they’re there as fillers so that the MC actually has other people to interact with.

For a first book this long I’d expect to actually have some type of substance, but found none. The only saving grace was the narrator who did a pretty good job with the horrible content he was given. I had about 7hrs left of the book and couldn’t listen to the drivel any longer.

If you want to hear about an MC that essentially can eliminate everything in his wake, has no real personality other than being analytical “must kill arch nemesis who made me this way”. It’s essentially Dragon Ball Z but without the really long episodes in the middle where they power-up. This is an audio book you listen to when you have literally nothing else to do and even then I wouldn’t recommend.

A lot of missed opportunities with simple errors

It takes a lot for me to be annoyed with a book. This I believe is on the author and not narrator. There are a lot and I mean a lot of repeating words/statements. Things that should not have escaped proof reading. These errors take away from being able to fall into the story. The concept and progression of the story and the story itself are perfectly fine. The issue comes from whomever let slide regular wasted words It never seems to stop

Plot is good but author should buy a Thesaurus. author also forgets his own plot points. trying to have interesting twists through memories the story forgets the mc already had things the twists try to give the mc.

many times while listening I couldnt help but think "I dont think he is using those words correctly." Other than all that, not terrible.

so overall I loved this story, I love the OP MC, just absolutely wrecking with a smile. my problem is with the reader.... he keeps misreading things like depleted for dilapidated multiple times.... which leads me to the author using phrases over and over and over. "he released a frightening burst of speed for every time someone moves faster than normal. other than that great book and looking forward to the rest.

Wow! what a book. Could not put it down.

Warning, don't read this book if you have something important to do.

Don't start this book if you do not have the next 24hrs free.

Don't start this book if you need to sleep.

I hope the author will deliver book 2 soon.

this is way better than the other reviews say, can not wait for book 2

I want to start by saying you can yell the author really loved this story idea. It was very fast paced all centering around the MC and how op he is (a genre I really love and have read a lot of). however the writing was TERRIBLE and made it really hard to get into the story. The writer is very tell not show, and will often tell the thoughts of a character immediately followed by explaining the character doing whatever he was just thinking about. this got very annoying especially when the character thinks about the MC being dumb and in the next sentence he tells the mc he's being dumb. and this happened A LOT. The other thing that made it a hard listen was that EVERY CHARACTER had multie internal monologs explaining why the MC couldn't do something, followed by narrater backstory on why it was impossible, followed by the mc doing it. this also happened repeatedly with little increasing difficulty to the mc. it was always, everyone thinks it's impossible, then the mc barely does it or makes it look super easy, which in turn makes the paragraphs of description why it's impossible seem meaningless and not relevant. At least in other op stories, the trials get progressively harder, not this one. the only reason i gave it 2 stars was because I was able to struggle through it (with some skips here and there over pointless repetitive narration), and because you could really tell the author loved the story and had planned out some interesting events. but if you get turned off by bad writing, I would definitely pass by this book.

I really enjoyed this listen, its fast moving and no harem elements! My only complaint is that Joshua mispronounced a couple of words through the book, but other then that he killed the narration! Can't wait for book 2

A work of art!

skyhaven was awesome and the seven realms are amazing but this one is my favorite I can’t wait for the next book and hope this hits audible soon :)
Read it! love it! bye it!!!!

As an occasional writer myself, I hate to give bad reviews, but this book earned its 2 stars. I've only made it as far as I have because I already blew a credit on it.

First of all, I'm at chapter 25. So far, the author never gives any context or explanation of the system. There are stats and titles, but they're never explained. Is 5 constitution good or bad? what does it do? we have no idea. The system could just as well have not existed, and it wouldn't have changed much. The MC even has a special thing called "omen points" and when he suddenly has some to spend, you could be forgiven for thinking stat or title progression is going to happen. It turns out, omen points are used to subdue special weapons. So no systemic progression, he just has axes now. In the entire time I've listened, he's only experienced any progression twice. first: there was a 7 year time skip pretty much the instant he unlocked his abilities that he spent on combat training, and his stats changed somewhere during those 7 years. The second time he made some kind of pact with his dark side that apparently unlocked some of his abilities, but again none of the new titles are explained, his raw stats don't increase, and the only change we have even a slight bit of context for is that he goes up from e rank to d rank.

second, the mc is a macho prick to essentially everyone he meets. As an example, "don't mess with that guy, he's A ranked and we're E ranked" led to the mc needlessly antagonizing the a ranked guy. Then when the A ranked dude decided to be nice anyway, the mc continued to be a dick to him for no good reason. This is only one example of the many times he needlessly antagonizes and/or bullies literally everyone. Just to add to the fun, when he's not being a jerk he's whiny and emo. Every thought that's not about instant distrust of everyone and everything around him entails him whining about something.

Third, is the portrayal of women. There are no real female characters in this book. There are only three archetypes which are awkwardly glued on to literally every woman that appears. Any woman that constitutes an authority figure is automatically assigned the archetype of "needlessly bitchy" and treats the mc in an extremely brusque and callous way. I'm going to call the second archetype "beauties" because that's what the author refers to them as. over. and over. and over. You see, the author only knows one adjective to describe attractive women, and since about 60% of the women in the book are only there so the mc's roommate can drool at them, be prepared to hear the word "beauties" used 5 or 6 times per chapter. Not only that, but you know how cringy incels on the internet call women "females?" the author does that here with the word "beauties." So many times, the word "beauties" is just substituted for the word "women" in a cringe-worthy way. If you've gotten tired of me saying "beauties" by now, then just remember that every chapter of this book after he reaches the academy uses this word more times than I did just now. Finally, the third archetype is "manipulators." These women all seem to share the same charm -based special power, and are all basically the same character. Luckily for the mc he's too emo to experience any form of sexual attraction, and thus is immune to their charms. Mostly all they accomplish is giving the mc another excuse to be a jerk.

An amateurish Summoner a la Eric Vall wannabe, even got Joshua Story (which is the only reason i didnt DNF earlier).

The plot is ok, but the execution is terrible. The pacing is terrible and used time skip all the time 2 weeks past, 5 hour past etc etc. and finally 7 year past, all the while when the MC stats increase and he get his power. No explaination at all until 6 hours in. This is suppose to be a litrpg and it skip it. Wow.


So what do you get to know is 6 hours? Nothing! There is only some random events that brings nothing to the story. The MC cluelessly moves forward with plotarmor. There is a few hints of people or things. But obly hints, no developement at all. Its super annoying. After 6 hours (25%) I know nothing about the MC or otherwise.

Oh yeah, his 7 year long master send him to school (after 5 hours of nothing) without a clue of the academy, the world or any rules. That is great as on his first day he has to fuse with demon to not get killed, after he passes out. Nothing strange to see here. The master couldn't help with that? Further more, he finds a slume and a big explosion destroys have the school and he passes out again. He actually passes out once an hour for the first 5 hour and gets to a dream world (which ofc is explained either). Horrible just horrible writing!! Dropped!

i quite liked the mc although he's seriously op.
bad guys were all from one template ... 'i am unbeatable you minnow!' types
everyone is confused and the word 'huh' is definitely overused when the battles commence ... use a thesaurus mate!
if you can get over new enemies appearing for no apparent reason and the mostly unexplained 7 year gap in narrative while the mc achieves his superpowers the story is okay but I'm
not sure I'd rush out to buy book 2.