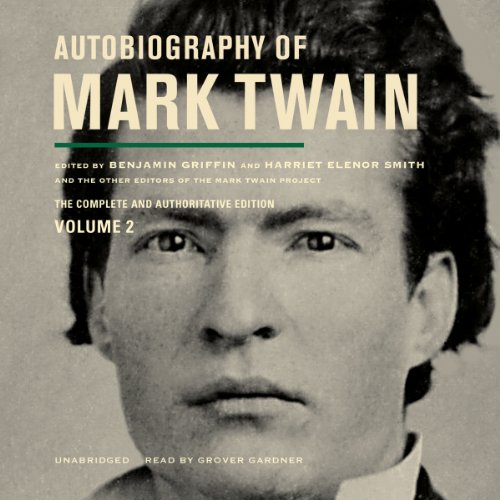 Mark Twain's complete, uncensored Autobiography was an instant best seller when the first volume was published in 2010, on the centennial of the author's death, as he requested. Published to rave reviews, the Autobiography was hailed as the capstone of Twain's career. It captures his authentic and unsuppressed voice, speaking clearly from the grave and brimming with humor, ideas, and opinions.

The eagerly awaited second volume delves deeper into Twain's life, uncovering the many roles he played in his private and public worlds. Filled with his characteristic blend of humor and ire, the narrative ranges effortlessly across the contemporary scene. He shares his views on writing and speaking, his preoccupation with money, and his contempt for the politics and politicians of his day. Affectionate and scathing by turns, his intractable curiosity and candor are everywhere on view.

The way it should be done.

I purchased this with some small fear. Not about Twain's part of it but because the first volume was ballasted with way too much information about who the editors and compilers were and how clever they had been in editing and compiling the work. And in volume 1 it was all at the beginning of the book and of the chapters so at no time was it safe to use the guff blocker that is labelled "fast forward".

But this edition is done the way it should be done. Hoorah!!!! There is still some content about the editors and financial contributors, as I am sure is only fair. But it is all at the end. Hoorah Hoorah!! Puttng it there, where it belongs, means that as a listener you have been able to enjoy Twain's stream of consciousness after which you realise how much you should be grateful to the people in the credits section and are happy to listen to it and give them credit.

Grover Gardner is an inspired choice as narrator reading the material with inflection and style. Getting excited in the exciting bits and amused in the amusing bits. If anybody ever wants an example of how an audiobook should be performed then they shoulduse this as their guide.

I said this before, for the first volume of this book, and I'll say it again: this is an incredible act of generosity on everyone's part: the editors, the researchers, Twain himself, and especially (in the case of the audiobook) Grover Gardner. Gardner is one of the best Twain readers around - you won't go wrong with any of his performances of a Twain book - and listening to this is like sitting back, legs propped up, and hearing a garrulous old friend talk about his life. All that's missing are the cigar and the glass of brandy. (You'll have to supply those yourself, if you're so inclined.)

This volume has quite a bit to say about God, none of it particularly complimentary. It's no secret that there was no love lost between Mark Twain and God, or at least God as he conceived him to be: Twain's God has a lot of suffering to answer for, suffering that in Twain's opinion could easily have been avoided by a snap of the finger.

The second volume also has quite a bit to say about cats (Sour Mash was one of his favorites) and about his daughter Susy's biography of him, from which he quotes extensively. Other topics that grab Twain's attention, over the course of several months of dictation, are copyright law (he favored copyright "in perpetuity"); how the government used military pensions to buy the votes of the pensioners; phrenology and the mind cure (he had no truck with the former, but seems to believe, or want to believe, in the latter); and his admiration for London cabmen, who had to acquire a knowledge of the city that rivalled Twain's own knowledge of the nooks and crannies of the Mississippi River.

There are villains aplenty. One of the chief villains is Twain's fellow writer Bret Harte, who was (in Twain's opinion) a liar, a sponger, and a cheat: a man who abandoned his wife and children to genteel poverty when he left for Europe, a man whose default mode was sneering. (One night over a game of billiards, he went too far and sneered at Twain's beloved wife Livy. Twain set him straight, unloading a train of vituperation that had been years in the making.) "The sense of shame," Twain says, "was left out of Harte's constitution."

There are also a few heroes. One was Livy; another was Helen Keller, who met with Twain several times and whom he considered a friend; another was Keller's teacher Annie Sullivan. Henry Rogers, a robber baron to some, was a personal hero to Twain: by careful financial management, Rogers was able to help Twain out of bankruptcy and pay back "a hundred cents on the dollar," satisfying Twain's sense of honor - and more to the point, Livy's.

There's at least one complete short story embedded in these reflections: "Was it Heaven? or Hell?" I'd read that story many years ago, but I never realized - nor did Twain realize at the time he wrote it - that a similar scenario would play out in his own life shortly after the story was published. Livy and Jean both became deathly ill, and following the accepted medical practice of the day, neither was told about the other; so the unfortunate Clara was left with the task of making up stories of Jean's exploits to tell her mother, occasionally tripping over inconsistencies. (Jean, of course, was only a few bedrooms away, in a delirium of fever.)

This volume, like the one that preceded it, is a thing of joy and beauty for any lover of Mark Twain's. I hope all the participants remain healthy and able to see this magnificent project through its third and final volume, and that Grover Gardner will be able to narrate it, and that I will be around to hear it.

Volume II of this new autobiography is better organized and easier to read than Vol I was...and it is very very humorous. Twain rips apart those who wronged him, as he saw it. No one can destroy an enemy with such fun as Twain does. But he also praises friends like General Grant and tells about Grant's dying days as the general writes his memoirs and Twain sets up a publishing house just to publish Grant's work. And when Twain launches into his critique of the Old Testament and the character of the god described in it, you will laugh regardless of your religious convictions or lack thereof. Twain says things everyone has thought but he says those things in ways that are both humorous and dead-on to the point. Like the old phrase: what oft was thought but never so well expressed.

The genius of American letters…

fluctuates between Nihilism and offended Christian morality, never quite embracing the former while desperately trying to reject the latter. A very revealing look at a man whose brilliance obviously came with dark introspection and depression. And yet the hilarity and eloquence of his prose remains The volumes brightest beacon

Listening to or reading Mark Twain's auto biography is unlike anything I've ever experienced in a literary sense! It's like reading a Michelangelo, or a Picasso!
Anyone with a passing fancy of literature owes it to them self to read it
Remarkable.

I'm in love with Mark Twain! What a beautiful mind and how well he understood humanity.

I never knew the breadth of Mark Twain's work and humour until I listened to this. Grover Gardiner's impeccable delivery was such that I imagined it was Clemens himself narrating. Now I'd better listen to Vol 1.