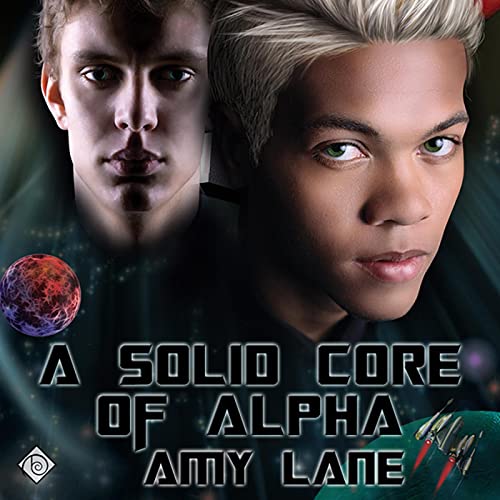 A Solid Core of Alpha

In an act of heroism and self-sacrifice, Anderson Rawn's sister saved him from the destruction of their tiny mining colony, but her actions condemned the 13-year-old to 10 years of crushing loneliness on the hyperspace journey to a new home. Using electronics and desperation, Anderson creates a family to keep him company, but family isn't always a blessing. When Anderson finally arrives, C.J. Poulson greets him with curiosity and awe, because anyone who can survive a holocaust and reinvent holo-science is going to be a legend and right up C.J.'s alley. But the more C.J. investigates how Anderson endured the last 10 years, the deeper he is drawn into a truly dangerous fantasy, one that offers the key to Anderson's salvation - and his destruction.

In spite of his best intentions, C.J. can’t resist the terribly seductive Anderson. Their attraction threatens to destroy them, because the heart of a man who can survive the destruction of his people and retain his sense of self holds a solid core of alpha male that will not be denied.

soo... this is basically a glorified harmony BUT it is trying and i respect that.

Another Solid Story from Amy...

Amy Lane continues to be at the top of her game. The trials of Anderson and the dedication of CJ are just the topping to this great story. Family, survival, love, pain, joy, sadness...it's all here. Highly recommend...

More layers Than you Think at first

I listen to this story the first time as just a good story - which it really is. But when i listened to it the second time i put On a different set of glasses so to speak and listened while thinking of the splitning of ones personallity the Way Anderson did to create the friends he needed in the ten years he was all alone. The story became something Else and even better - Amy Lane did an amazing job with this story and it has become one of my top ten. Narrator is - as he allways is - very good. Absolutely worth your time if you like m/m romance and especially if you like your stories a little more Than meets the eye. Allthough is is kind of sad too because your heart will break repeatedly for the little lonely and very smart boy Who breaks into pieces.

One of the best books I've listened to in quite a while. Lots of great story and fantastic ideas. I found it so good that I listened to the whole 11 hour story with only a short break. Kept me interested right to the end, and was able to evoke a very emotional reaction...both by story and the way it was narrated...unusual in today's writings. The narrator, Paul Morey, was superb! I will look for other books with this narrator!

I was skeptical about this book and didn't buy it for a long time - the description and genre did not appeal to me even though Amy Lane is one of my favorite MM authors. I am glad I finally got around to this one though. It has become one of my favorites.

Paul Morey is a kind of hit-or-miss narrator for me. For some books I really love him, and in others I struggle with his pronunciation and inflections. He was a really good fit for this book though and I enjoyed the life he breathed into this cast of characters.

I really just don't have the words - the blurb didn't do it for me, but I honestly couldn't write anything that would do the book any more justice. Amy Lane just has *so* much talent in creating 3 dimensional characters so real that you feel like you "know" them, and love them and empathize with them ...

This book is no exception. Don't judge this book by it's cover (or blurb). Just buy it, listen to it, love it.

3.5 rounded up b/c the narrator was great. This is not what I thought it would be. It's not really a "space" story, but outer space is the background for the total mind f**k Amy Lane does in this story. It is really a story of how far a young boy's mind will go in order for him to survive. The only negative thing was I didn't really "feel" the romance part with CJ. It was almost an insta love thing. The rest of the story is good, but the romance is sort of the weakest aspect, which is disappointing in an Amy Lane book.

I did like... but is it a re-listen... probably not. Don't get me wrong...definitely worth the listen, just not worth the re-listen. Good story, plot and end and everything. Just... took to long for the romance I guess. 17 chapter long... that is just far too many for me...

Morey does great narration in the m/m selections. Whenever I hear him I always think of Jorey Hardcourt though from Mary Calmes Bulletproof!

Credit... do not buy

What disappointed you about A Solid Core of Alpha?

This story hit the ground running but after a few hours, the pace started to lag. Also, I wish I'd got a warning about the bisexual content though. There wasn't much but still.

It probably won't be another Amy Lane for awhile. She's a great writer but lags.

Have you listened to any of Paul Morey’s other performances before? How does this one compare?

I didn't realize Paul Morey had such range until now. Before, he seemed to just seemed like a good reader but not with a lot of different voices. He did a great job in this one and I am looking forward to reading anything he narrates again.

A bit disappointed because this could have been pretty deep but just kinda kept going in circles it seems.

Amy Lane's skill is undeniable but if only there were some books condensed down. The two main characters were likeable enough but the ones around them, there weren't many others that I'd say were any good. Toward the end, I just wanted it to hurry up and finish so that I can say I finished it.

Excellent story with a few hitches in the reading

I've learned that audiobooks are a good thing with my past few purchases, and I was very pleased with 'A Solid Core of Alpha.' The characters were interesting, the story was engaging, and the romance was touching.

The only criticism I have is with the reading. There were a few, I guess I'd call them hitches, as though the narrator forgot to completely rewind over his reading mistake before re-recording. It didn't detract from the story, but it was a little jarring to experience.

Overall, I highly recommend this book for anyone looking for a solid, gay romance in the sci-fi genre.

A lot more plot than I am used

The plot was really good. The narrator was also pretty good. I found the pauses to be fairly long in the beginning so I sped up the narration speed. That took care of the problem and I was able to enjoy the book.

Such a good Listen!!!

So when I got this book, I was hunting for something in space and a little bit of smexy times. This book was so much more. It was so interesting and very well written. The way the author dealt with the aftermath of a courageous act and how a person's mind can protect and fracture at the same time was awesome. The love story was just icing on the cake.

The narration was great and the story moved at a pretty steady pace without a lot of angst. I laughed a little as well as experienced great heartbreak. Such a well written book. I thoroughly enjoyed this listen.

Not the best Amy Lane has to offer, yet...

This is one of Amy Lane's earlier works, and it does show. The story isn't as polished and the writing less mature than her later publications. Yet the talent for storytelling is definitely there.

This is science fiction, and the genre demands that you accept certain things without questioning the premise too much. I can only assume that the person who rated this one star was unable to do so, because I cannot think of another reason why the rating was so low.

A child genius is the only survivor when his home planet explodes. He is locked in a rescue ship heading for the nearest port, several years of interplanetary travel away. He programs holograms to take the role of his dead friends and families, thus preserving a semblance of normality and protecting his sanity. The first half of the book is all about this journey, the love story does not begin until he is rescued about halfway through the book! If you like sex on the third page of a book, this one's not for you.

Once the love story does begin though, it is a very warm and moving tale of two people clinging to each other in the face of unimaginable trauma and a slowly unravelling psyche, where the only solace they find is in each other's arms.

I thought Amy Lane described the psychology of the relationship with care and respect. A psychologist might object, but I had no difficulty understanding the reasonings and reactions of the characters, and I loved the fact that the wounded soul of the relationship truly is the alpha of the story.

All in all, not the best Amy Lane has done, but it deserves a strong 4 stars!

It was the story that kept me listening. The part where Anderson lives with the holograms is short. Then he arrives on a spacestation with real people and the point of view switches.
The narrator is monotone, reading an orgasme in the same manner as eating frozen peas for a decade. The sound quality is bad. But the worst is, he does not delete his misreading. He just reads the wrong sentence again.

Amy Lane really produces the most amazing stories. Such detailed world building. A story that isn’t defined by m/m relationship but just allows it to be a natural part of a much bigger story. This is the second of her books that I’ve listened to - I think I’m going to be a massive fan.