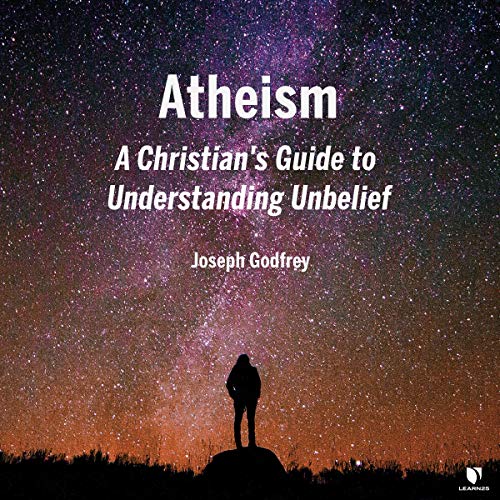 How can a Christian understand unbelief? Answer your biggest questions about atheism with this thoughtful and balanced course.

For much of Western history, belief in God seemed universal. As society has grown more secular, however, people have increasingly expressed disbelief in God. Today, a quarter of Americans are religiously unaffiliated, with many identifying as atheists. As the number of atheists has grown, so too have debates around the legitimacy of religion. Too often, these debates have been marked by misunderstanding on both sides. This audio course aims to bridge the gap by helping believers and nonbelievers engage in thoughtful and illuminating dialogue.

Presented by Fr. Joseph Godfrey, a leading professor on the philosophy of religion, these lectures are both analytical and sensitive. Before becoming a Catholic priest, Fr. Godfrey engaged in an intensive study of the writings of atheists such as Nietzsche, Sartre, and Marx. By challenging his belief with such readings - along with writings on atheism from Christians such as Aquinas and Karl Rahner - he gained an enduring respect for atheist reasoning even as he affirmed his own faith.

In these eye-opening lectures, you will explore the different forms of atheism and scientific theories used to support the nonexistence of God. In the process, you will gain a deeper understanding of evidential arguments against God, while also considering how such evidence does not necessarily block paths to belief.

©2017 Now You Know Media Inc. (P)2017 Now You Know Media Inc.
Filosofia Spiritualità Catechesi ed evangelismo
Mostra di più Mostra meno
"Joe Godfrey's works exhibit a wide-ranging and deep understanding of various philosophical traditions and periods in the history of philosophy. He is able to deftly utilize the insights of thinkers from the ancient, medieval, modern and contemporary periods. He is able to dialog with philosophers in the Thomistic tradition, the Existentialist tradition, and with those in contemporary analytic tradition. There are very few philosophers who are as able as Joe is in engaging in significant discourse with such a wide range of philosophic figures and traditions - very impressive!" (John Zeis, Professor of Philosophy, Canisius College)
"Joe Godfrey is an accomplished philosopher of religion. He has published extensively on the subject and provided insights that are not only perspicuous but germane for our chaotic times. His courses on atheism speak to a long time Jesuit commitment to address the culture of unbelief by understanding it, respecting it, building on the foundations of dialogue. There is perhaps no greater intellectual and pastoral challenge for the Catholic Church in our contemporary orbit of conflicting 'isms' than addressing with charity and clarity the myriad iterations of what we call atheism." (Michael W. Higgins, Distinguished Professor of Catholic Thought, Sacred Heart University, Fairfield, Connecticut; biographer and Thomas Merton scholar)

I recommend this audiobook to atheist, agnostic or theist likely to engage and/or practice the Abrahamic traditions. My only disappointment regards the lack of a text outline for reference.
Godfrey is a gentle thoughtful sage and a welcome alternative to the cacophony that presents as current religious commentary. If i find my way clear of all that static i am usually mystified as to the foundations upon which reasonable atheists and agnostics build their moral character. Godfrey presents me with many logical and cultural tools to imagine such structures.
It is worthwhile listening to a speaker who can weave Feuerbach, Freud, Marx, Rahner, Nagel, Gould and —!!Keillor!! into a concise set of lectures.

AT A GLANCE:
A Jesuit priest gives a basic and impartial overview of atheist arguments against theism.


CONTENT:
Many topics are covered though in uneven depth. A good deal of time is devoted to explaining things like the problem of evil and how syllogisms work, and helpful distinctions are made (evidential atheism vs atheism of suspicion, etc). Listeners are acquainted with ideas from Feuerbach, Nietzsche and Sartre, with little or no attention given to New Atheists like Harris, Dennett & company. The author is highly sympathetic to atheist leanings and presents the arguments in academic fashion. This would work as a presentation for senior high school or undergraduate students, though will prove less useful for those already familiar with the relevant literature.

NARRATOR:
Fr Godfrey is a specialist on these topics. His voice is articulate and well-rehearsed, if slow (I would recommend 1.25x playback speed). It should however be noted that the lectures are not consistent in sound; in some he is energized and vibrant, while in others he sounds exhausted by comparison. This is only mildly distracting and does not take away from the content.

OVERALL:
Recommended for those with minimal background in Christian-Atheist dialogue and wish to be acquainted with its elementary concepts and barriers.