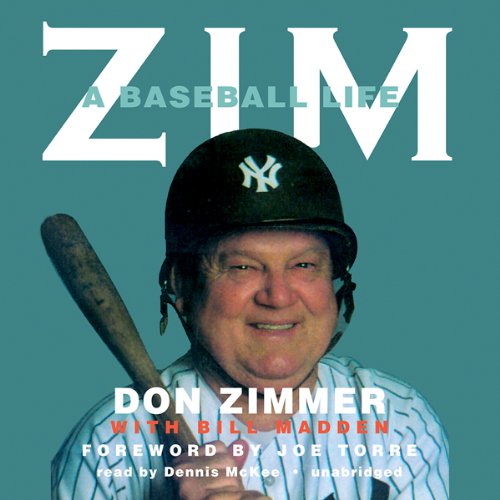 Don Zimmer had his first taste of baseball glory in 1948 as a member of a national champion American Legion team. He was drafted by the Brooklyn Dodgers, only to have his career—and life—threatened when he was beaned in a minor league game in 1953.

After a miraculous recovery, he went on to play for Brooklyn’s only world-championship team in 1955, the L.A. Dodgers’ first world-championship team four years later, and as an original New York Met in 1962. Zim managed the San Diego Padres, Boston Red Sox, Texas Rangers, and Chicago Cubs, and was Joe Torre’s bench coach during the Yankee’s world championship seasons of 1996, 1998, 1999, and 2000. His career has crossed paths with some of baseball’s most memorable people and events. Here is 50 years of baseball history as seen through the eyes of one of its most colorful characters.

©2001 Don Zimmer and Bill Madden (P)2001 Blackstone Audio, Inc.
“Collaborating on Zim: A Baseball Life with Bill Madden may be the best decision the Yankee coach ever made. On every page, he is there to be appreciated for his journey as a player, manager and coach for more than half a century as well as for his wisdom, his humor and for just being himself.” ( New York Times)

Get to know how Zim thinks and operates

Would you try another book from Don Zimmer and Bill Madden and/or Denis McKee?

No; there's not much more autobiography left in Zimmer!

What was one of the most memorable moments of Zim?

Joe Torre calling Zimmer to offer him a bench coach job before 1996. The most interesting moments throughout were stories about how and where Zim found his next job. There is good insight throughout on the relationships between a field manager, general manager, and owner. Descriptions of baseball's "old boy network" were really well done.

Narration overall was engineered far too quietly. I had to cram my earphones into my ears, at full volume, in order to hear well on a train or plane or subway. This isn't the case with other audiobooks. There isn't much variety in tone to the writing -- it's all very matter-of-fact and not terribly earth-shattering. All baseball fans already know how every season ends, so it would have been hard to bring much more life to the narration. The writing style really lacks variety. "Working with Buzzy Bavasi was one of the great pleasures of my life in baseball... Pee Wee Reese was one of my favorite players and a real idol to me when I broke in to the big leagues, plus a great guy... I really loved Jim Rice, he was a heckuva ball player. I didn't much care much for Bill Lee, and I wasn't sad to see him leave after the season... Billy Martin kept getting in trouble off the field, but on the field he was a great manager... George Steinbrenner was always very good to me... The 1989 Cubs were a super group of guys; I really miss the times we had together." There's chapter after chapter of flat and plain writing like that, with very little drama, and no flowery poetry whatsoever. That's probably just a reflection how Zim is in person. To that extent, the narrator really didn't have much to work with, and by the end it sounds like he's just banging through it to get the book over with. And as a Mets fan I was happy to get the 2000 World Series over with as well :-)

Not a good candidate for a movie.

Was a little disappointed it ended at 2000 season; would like to have heard more about how he wound things up with the Rays.