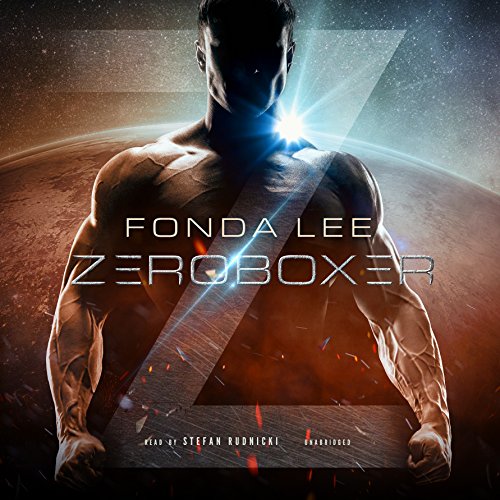 A rising star in the weightless combat sport of zeroboxing, Carr "the Raptor" Luka dreams of winning the championship title. Recognizing his talent, the Zero Gravity Fighting Association assigns Risha, an ambitious and beautiful Martian colonist, to be his brandhelm - a personal marketing strategist. It isn't long before she's made Carr into a popular celebrity and stolen his heart along the way. As his fame grows, Carr becomes an inspirational hero on Earth, a once-great planet that's fallen into the shadow of its more prosperous colonies. But when Carr discovers a far-reaching criminal scheme, he becomes the keeper of a devastating secret. Not only will his choices put everything he cares about in jeopardy but they may also spill the violence from the sports arena into the solar system.

I honestly don't know why readers are so passionate about this book. It's not a story, it's just a list of nice things happening to a nice boy.

Everything goes right for this kid. He is a good boy with no major flaws. Everyone around him is basically nice. He wins all the time. A beautiful girl falls in his lap and the relationship is effortless. His career trajectory resembles the Mount Washington Cog Railway. The author keeps setting up possible tension, then immediately deflating it by letting him win again. I stopped caring as soon as I saw there were no consequences.

The world is interestingly built, and there's some stage-setting for some really good drama. The protagonist could have experienced seriously earthshaking internal conflict requiring massive personal growth and change.

Not to give too much away, but at one point a couple hours in, he learns a fact that threatens to undermine his entire self-identity and everything that's most important to him. And his response to this is... to pretend it didn't happen, and go back to business as usual.

I'm not kidding. He seriously just decides not to think about it and gets back to the boxing ring. That's realistic, sure, but it's not a good story!

I only made it about 2/3 through, then started skipping ahead, looking for any kind of tension or plot development. Eventually I found some near the end but by that point, I didn't care. I felt certain the author wouldn't let anything really bad happen to her golden boy.

It's possible that I'm not the right reader for a sports story. Maybe there's an entire bandwidth of story data being transmitted, and I don't have the receptors for it? I don't know. But I suspect even huge fans of sports stories expect to see at least a LITTLE conflict, to have at least a LITTLE doubt that everything will work out the way the main character wants.

Harlequin romance goes to the moon

Or “Rocky’s Space Adventure”
It had been a while since I listened to a sci-fi book. This was definitely more in the romance genre.
Wordy. Predictable plot line and ending. Or if you like the romance books you’ll probably like this one.

A friend recommended this book to me. It's sci-fi, it's fighting, what's not to like? However, when I saw that it was considered young adult reading I was skeptical. I was a little surprised by the narrator's voice and delivery but in the end I realize how perfect it was. The story is relatively simple, but it is quite engaging putting you in the mind of a fighter as he moves both inside and outside the ring.

I really loved that the author didn't spell things out for the reader and we are free to fill in the gaps. The world building was solid and the action was great but not sensationalized. I found myself wondering again and again where the story could or would go next, and the author never let me down.

A good book. Not great or anything but good. Good enough for me to listen to the other Vonda Lee book on my que. Also I am so done with Stefen Rodniki

At least the reader was good

It seems like Lee tried to write a feel good, underdog sports story, but wanted to add a little drama. Unfortunately, that drama raged out of control and she wrote her main character into a corner that there was no way to escape from, so she decided to try a deus ex machina that didn't actually solve anything. All the main characters are screwed and the human race is headed to a interplanetary civil war that will end in genocide.

great book! only wish it was longer

one of my favorite books. I have read this book 4 or 5 times already it's great!

it's a harliquin novel in space

I couldn't finish it. the characters were trite, it immediately went into a love story with no character development and the plot was just meh. don't waste your time.

Fonda Lee's Zeroboxer is a sporty, futuristic tale with mixed martial arts competition staged in zero gravity. The main character is a youth emerging from a poverty stricken background to rise in the ranks. Fame is thrust upon him early. At the same time, Earth (his home) is largely a decaying also ran, while a settled Mars is the up and coming power. These two worlds also differ in their attitudes towards human genetic engineering which Mars has readily adopted as part of their adjustment to the red planet, while Earth retains a more old fashion attitude with more limited options. As his fame increases, he learns that he harbors a secret that threatens to upend his whole career. Everything comes to a head with a Mars / Earth staged battle royale for solar system bragging rights.

Lee riffs off Spider Robinson's Stardance, where 'dancing' in zero gravity offers more freedom, to extend this to a physical contact sport, basically boxing. While the genetic engineering aspects are skillfully employed, there's little background on exactly how Earth has come to be so rundown, when sophisticated genetic manipulation is emblematic of technological skill. The Mars / Earth hostility seemed forced and without adequate explanation, while the promotion of the sport and the lameness of law enforcement were glaring deficiencies.

The narration was well done with the deep base of Rudnicki offering a perfect rendition. Pacing is brisk and the fight scenes are especially noteworthy.

This book was an unexpected good read! i could relate with the storyline and situations which Luca goes thru and deals with! the whole plot and story telling was solid and liked the futuristic setting!

Surprisingly good for a free title.

A lot of borrowed themes and twists.
Nothing new.
But written rather well.
Great narration.

Not my cuppa BUT…

Not my normal read and almost didn’t continue past the first chapter. But an easy read which leaves you with a good feel at the end.

This is a derivative tale with a sci-fi setting and there is nothing wrong with that. Nothing fantastic either, but it’s short enough not to outstay it’s welcome,