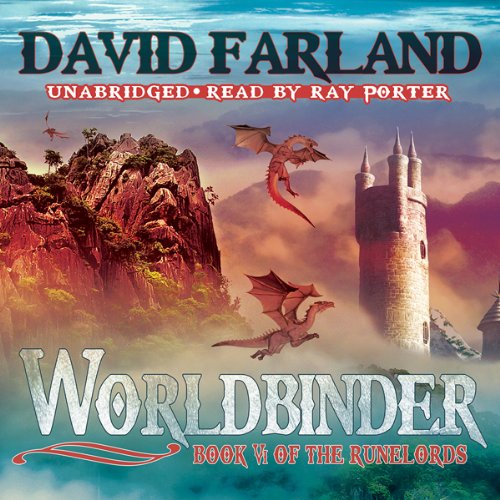 After the events of Sons of the Oak, Fallion and Jaz, the sons of the great Earth King Gaborn, are living as fugitives in their own kingdom, newly invaded and secretly controlled by supernatural beings of ultimate evil. The sons are hiding until they can regain their rightful places in the land.

Fallion seems destined to heal the world and feels the supernatural calling to act. When he summons his powers to do so, though, two entire worlds collapse into one, and every living thing in both worlds is transformed into an entirely new being - yet still somehow the same. Evil is certainly still the same - and may have influenced all of this for a terrible purpose.

David Farland is the pseudonym of Dave Wolverton, an American author of fantasy fiction who lives in Utah with his wife and five children. He was a budding author during his college years but came to prominence when he won the Writers of the Future L. Ron Hubbard Gold Award, for On My Way to Paradise, in 1987. He has achieved much renown in the science fiction field, but fans may know him best as the author of Star Wars novels; The Courtship of Princess Leia was met with acclaim from critics and readers alike and became a New York Times best-selling novel.

I am a big fan of the Runelord series and the first three books were riveting. I loved the world created by David Farland and the moral choices that were faced by those trying to defend their lands from other Runelords. With book four the story started to slide a little bit and unfortunately that trend has continued. Book 5, Sons of the Oak, passed the reins of the story over to Gaborn’s sons, Fallion and Jaz, and I just didn’t find them as interesting as Gaborn himself. Worldbinder continues with those same main characters; however, it changes just about everything else.


Farland hits the reset button on his story by having Fallion combine 2 completely different worlds together. The new world created is a hybrid of both old worlds and some characters who were dead on Fallion’s world are now back alive in new incarnations of themselves. Those who were alive on both worlds were combined into someone new with the memories of both. Anyone who did not have a counterpart on the other world remains the same but feels like half a person. I must admit this is a very interesting concept but the manner in which it is implemented just didn't sit well with me. Farland oversimplifies what happens during the binding into something that wasn’t very believable for me.


The transition from Gaborn to Fallion in book 5 lessened the franchise for me. When book 6 completely changed the world around Fallion I found my interest beginning to wane but I was going along hoping for the best. Then the book just ended. The story is incomplete and there is no resolution at all in Worldbinder. Do not pick up this book unless you are willing to be in it for the long haul as this felt more like half a story to me. Even Ray Porter's narration was not up to snuff and felt quite rushed at times. I will give book 7 a listen to see if it pays off but right now I feel like I should have called it a day after book 4.

A new world wrapped in the same great story.

I love the addition of the new world and how they brought the forcibles into a whole new world of magic.

I love this book. The emotions it invokes are so strong. Rihanna is my favorite.

A good read, and challenge to the end

This was not as grabbing as the Son of the oak. Story is dark, but it is the main plot that feels muddy. It sets up for the next episode very nicely, and even though I struggled, I am ready for the next one.

Enjoyable continuation of the series. Dramatic change of tone and characters, but still has me attached to the series.

Ray Porter's narration capabilities only seem to be getting better. His range of character voices is fantastic, and I can easily keep track of who's speaking just by the sound of their voice.

There is so much review of books 1-4. Seems to be just filler.

Would you be willing to try another book from David Farland? Why or why not?

Yes, I want to finish the series.

The story is getting better though still a bit choppy. How heartbreaking that in binding the worlds, more evil is taking place.

Yes, but only if they needed mind candy to fill boring driving hours.

The narrator does a pretty good job of keeping the characters individually distinct. The story itself seems to be written as an outline and then only portions are filled between the highlights. There seems to be a lack of natural flow to the story. These last few books seem to be for sales, not to finish a story that started out a little above average.

He adds character distinction that would get difficult to follow while reading the book.

Was Worldbinder worth the listening time?

Yes, if this story wraps up instead of trying to write another installment to pay the bills.

optional header is not optional!!

was annoyed when it ended now I need the next book asap!!

Great story...lots of action...i loved reading the runelord books and now listening to them on Audible.