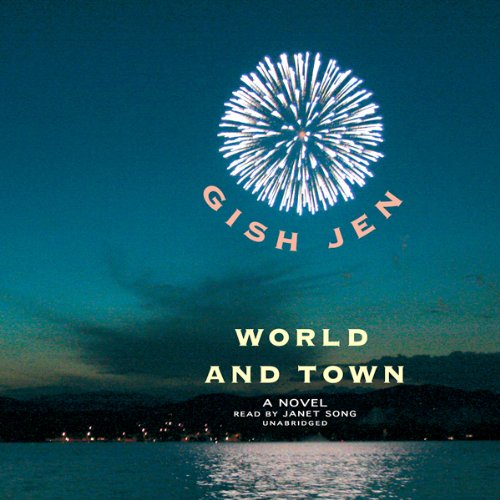 Sixty-eight-year-old Hattie Kong, descendant of Confucius, daughter of an American missionary, has lived to see both her husband and her best friend die back-to-back in a single year: “It was like having twins…She got to book the same church with the same pianist for both funerals and did think she should have gotten some sort of twofer from the crematorium.”

But two years later, it’s time for Hattie to start over. She moves to a small New England town where she is soon joined by a Cambodian American family and an ex-lover—now a retired neuroscientist—all of them looking for their own new lives.

What Hattie makes of this situation and of the changing town of Riverlake—challenged as it is, in 2001, by fundamentalist Christians, struggling family farms, and unexpected immigrants—lies at the center of a novel that asks deep and absorbing questions about religion, home, and what “worlds” we make of the world.

Moving, humorous, and broad-ranging, World and Town is rich in character and brilliantly evocative of its time and place. This is a masterful novel from one of our most admired writers.

In World and Town, author Gish Jen takes listeners to a close-knit New England community, where retired teacher Hattie Kong is still dealing with the nearly simultaneous deaths from cancer of both her husband, Joe, and her best friend, Lee. With a reading that’s part wistfulness and part conviction, narrator Janet Song brings Hattie to life while turning out genuine and realistic voices for the minor characters in Hattie’s small town.

Hattie’s family lives out of state (or, in some cases, out of the country), so she relies on the women in her walking group and on her beloved dogs for company  until two new additions to the town throw her world out of balance. The first is a Cambodian family that escaped Pol Pot to settle on the property next to Hattie’s; the second is her ex-boyfriend, Carter Hatch, a neuroscientist who also takes over teaching duties at Hattie’s yoga class. As Hattie develops a friendship with Sophy, the teenage daughter who lives next door, she’s pulled deeper into the family’s secretive life  and as she spends more time with Carter, she’s forced to face the memories of her last months with Joe. Meanwhile, a Gilmore Girls-esque cast of small-town characters peppers the story as the residents try to fight off cell phone towers and big-box stores, deal with the break-up of one of their most established couples, and convert Sophy from Buddhist to evangelical Christian.

Most of the story is told from Hattie’s point of view, and Song’s gentle voice and kind tone are a perfect vehicle for stories about Hattie’s childhood as a half-Chinese, half-American immigrant, nostalgia for days spent with Joe and Lee, memories of her relationship with Carter, and efforts to protect Sophy and her family. But Song is equally well-equipped for chapters told from other perspectives, including Sophy’s more imprecise musings and a long section that traces the demise of a couple’s marriage from the husband’s point of view. Whether the characters are discussing immigration, terrorism, religion, love, or death, the narration brings an extra level of sincerity to a sweeping story that’s emotional and passionate. Blythe Copeland

“In this thick, satisfying sprawl of a read…Jen gracefully introduces some of the great issues of our time.” ( Entertainment Weekly)
“Jen unwinds another expansive story of identity and acceptance, deploying voices that are as haunting and revealing as they are original…Jen’s prose is unique, dense, and enthralling, and her characters are marvels of authenticity.” ( Publishers Weekly)
"Sharply funny and wisely compassionate, Jen’s richly stippled novel slyly questions every assumption about existence and meaning even as it celebrates generosity, friendship, and love." ( Booklist)

America at it's worst

unlikable petty people horrible book trying desperately to return it. A waste of a credit

I eagerly bought this bought because it was read by Janet Song, who provides brilliant narration of Lisa See's books. However, I was sorely disappointed. Although Ms. Song does a good enough job (with what she's got), several of the chapters of the book were excruciating to listen to, because of the way they were written. The chapters where the characters speak in their own voice (as opposed to straight narration), were particularly tedious (one character, it seemed, repeated everything twice; another started every other sentence with "he like said this or she like did that".) I couldn't wait for the book to end, and I'm sorry I wasted my credits.

If you are looking for religion bashing ~ this one's for you!

Has World and Town turned you off from other books in this genre?

I will stick with better trusted authors. I always want to read new authors in the genres I enjoy. This one didn't do it.

If you could play editor, what scene or scenes would you have cut from World and Town?

Just the whole premise of the book!

It is SOOO disappointing to read the description of the book and then it is nothing like the sales pitch. The characters in this book spend the time questioning the "church lady" and her intentions in befriending the young character. She influences her to burn down a building, lie to everyone, point suspicions at others. Then the question is asked about the young girl, "Is she becoming a creationist?" Horrors!!! There are enough religion bashing books who proclaim to do just that. We don't need these closet ones who take the money and sell a bill of goods.
I really wish I could get my money back!!!