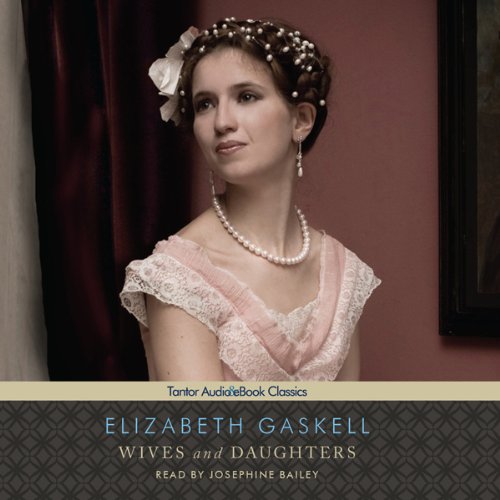 Wives and Daughters, Elizabeth Gaskell's last novel, is regarded by many as her masterpiece. Molly Gibson is the daughter of the doctor in the small provincial town of Hollingford. Her widowed father marries a second time to give Molly the woman's presence he feels she lacks, but until the arrival of Cynthia, her dazzling stepsister, Molly finds her situation hard to accept. Intertwined with the story of the Gibsons is that of Squire Hamley and his two sons. As Molly grows up and falls in love, she learns to judge people for what they are, not what they seem. Through Molly's observations the hierarchies, social values, and social changes of early-19th-century English life are made vivid in a novel that is timeless in its representation of human relationships.

If you love Jane Austin, read this

What made the experience of listening to Wives and Daughters the most enjoyable?

If you are a fan of Jane Austin or of wonderful readers, this is the book for you. Josephine Bailey, the narrator, brought each of the characters to life creating multiple drive-way moments. Loved it.

This is a great book

I loved this book. The nuances and character developement as well as the authors insight into human nature. Josephine Bailey reads the novel with perfection. I think she is one of the absolutely BEST narrators out there!

The performance of this wonderful book is flawless and mesmerizing. Gaskell's skill at drawing the details and sharing the heart of daily village life makes this touching story of love, family and coming of age a classic, worthy of savouring. A must "read".

You know how this would have ended

Where does Wives and Daughters rank among all the audiobooks you’ve listened to so far?

This was a truly enjoyable listen. Too bad it wasn't finished by the author, but at the same time, I know how I would have ended it! Fun to listen and see how this family saga unfolds

Incredibly well written. Loved every minute of it. Would love to listen to it again! I couldn't get enough this amazing piece of art.

Story of a English country doctor and his daughter in the 19th century. Interesting about country life but very long.

Josephine Bailey is the best narrator I have ever heard! I’m amazed how she switches voices between characters so seamlessly and convincingly! The story is well written and the characters are complex, I loved it. Also the BBC adaption stays very close to the book, and is very good!

Very boring .. did not enjoy at all….just many words . Disliked very much ..too bad

Not one of my favourites

True sorrow for the loss of a great author. Unfortunate timing of her demise.

That being said I did not find this to be one of my favourites. There were points that seemed to drag on. Also the complete unacknowledged love. I feel even through this was a long time ago, females were not that stupid.

Any extremely well read book of a beautifully told classic book. Wish it went on and told the story of Molly’s future.

The narrator, Josephine Bailey, deserves some sort of award. She manages to sound Victorian, and gives every character just the right accent and energy; each individual leaps, as it were, from the page, three-dimensional and totally convincing. The whole thing feels like a brilliantly-directed radio play. Loved it.

The missing ending is rushed into without a proper explanation that Elizabeth Gaskell had died just before she completed it and that the editor who sketched out the ending knew from her family how she intended it to end.. (That doesn't spoil the story but the ending should not come as a shock to the listener.)

Warning! Well, There Should Be One...

I didn't realise when I bought this - despite having a degree in Eng Lit and having read most of Gaskell's other novels - that this book is incomplete. Rather selfishly, Elizabeth G died in the middle of writing it. Well, almost at the end of writing it. Which means even if you're enjoying it, it is a blow. Maybe we were warned somewhere on Audible that it is an incomplete book - but if we were, I missed it. I prefer every other EG novel, to this one. It is a very mature work, and quite subtle. Stick with 'Cranford'. 'Cousin Phillis' or 'The Life of Charlotte Bronte' if you want a more readable and engrossing intro to Mrs G.

I spent a long time deciding which audible 'Wives and Daughters' to listen to. I am very pleased with my choice as the characterisation from Josephine Bailey was excellent and she really brings the story to life. At times I truely believe that there is more than one person involved. The story is very good and deserves to be more well known. I hope you enjoy it too.

This has always been my favourite Elizabeth Gaskell novel and this Audible Book is the best one to pick if you like each character to have their own personality. It capitivates your attention from start to finish. Definitely not one for going to sleep to! Josephine Bailey has narrated this superbly, each character has their own distinctive accent and it is easy to use your imagination to build a picture up in your mind of everything going on, even if you haven't seen the television version, which I might add is very close to the original story. If this version was used as an aid for an English Lit. Exam, I can whole heartedly say it would be extremely advantageous to exam success. Brilliant, well done Josephine.

What a fantastic literary creation Hyacinth Gibson is! If you like your characters three-dimensional, you will appreciate Elizabeth Gaskell's writing. The wise ones make stupid mistakes and regret them, the silly conniving ones get what they want, good things happen to bad people etc etc. A great story, shame it doesn't finish entirely because she died before completing it, but there is enough for you to finish it yourself in your mind. A comfortable, gentle, provincial story about people's lives in the vein of Jane Austen. The narrator does excellent voices, each character is easy to differentiate. However her normal 'narrator' voice was a little stiff and stilted, and took some getting used to. Once the writing was dialogue between characters, it really flowed. Well worth purchasing.

I downloaded this audiobook because I was the mood for something with a Jane Austen feel; little did I know just how wonderful the story would be and how sad I was when after finishing it to learn that Elizabeth Gaskell didn’t live to finish it, such a shame. I would recommend this to all Jane Austen fans.