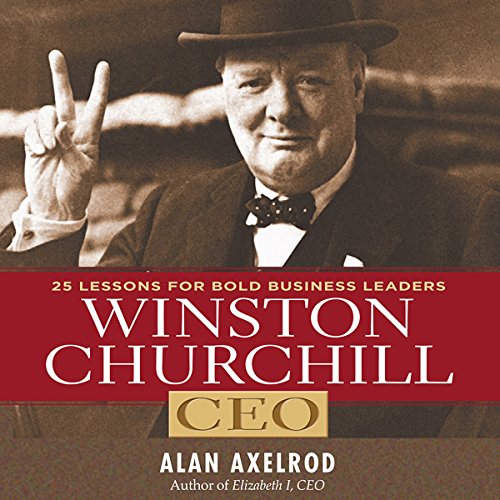 Following his BusinessWeek best sellers Elizabeth I, CEO and Patton on Leadership comes a new and perfect subject for Alan Axelrod’s innovative format: Winston Churchill, the quintessential leader of the 20th century.

Churchill skillfully converted crisis into victory, making the boldest of visions seem attainable; even though he sometimes failed audaciously, he embraced his errors and used them to become stronger. Axelrod looks at this much-studied figure in a way nobody has before: he explores 25 key facets of Churchill’s leadership style and decision-making from his early years as a junior cavalry officer and journalist to his role throughout WWII and demonstrates how he was able to overcome near-impossible obstacles.

Fluidly and engagingly written, each lesson is enlivened with a vivid vignette from Churchill’s life. As always, Axelrod’s penetrating analysis will instruct, inspire, and encourage those who lead business enterprises, large and small.

©2009 Alan Axelrod (P)2010 Gildan Media Corp
"As thorough a biographer as he is a business thinker, Axelrod even gets in a lesson on logos derived from Churchill’s famous V-for-Victory sign." ( Booklist)

This is an inspiring account of Churchills life and role in WWI and then later WWII.

I thought this book was well written and worth listening too. It was very clear.