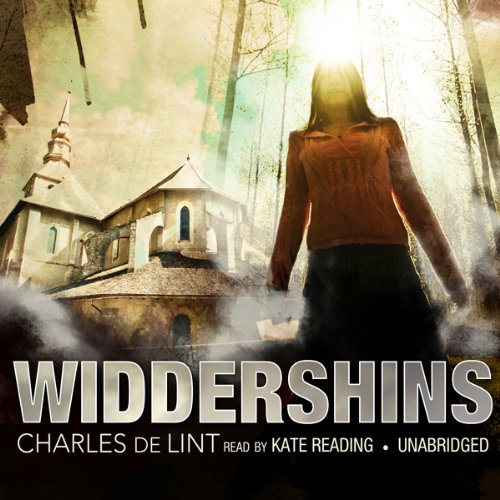 Ever since Jilly Coppercorn and Geordie Riddell were introduced in de Lint’s first Newford story, "Timeskip", back in 1989, their friends and readers alike have been waiting for them to realize that they belong together. Now, in Widdershins, a stand-alone novel of fairy courts set in shopping malls and the Bohemian street scene of Newford's Crowsea area, Jilly and Geordie’s story is finally being told.

Before it’s over, we’ll find ourselves plunged into the rancorous and sometimes violent conflict between the magical North American “animal people” and the more newly arrived fairy folk. We’ll watch as Jilly is held captive in a sinister world based on her own worst memories—and Geordie, attempting to help, is sent someplace even worse. And we’ll be captivated by the power of love and determination to redeem ancient hatreds and heal old magics gone sour.

©2006 Charles de Lint (P)2010 Blackstone Audio, Inc.
Realismo magico Contemporaneo Urbana
Mostra di più Mostra meno
“As familiarly as though he were chronicling the lives of old friends, de Lint spins yet another magical story of the intersections between reality and the faerie and spirit world in this latest addition to the Newford opus, his twin loves of storytelling and music-making shining through every page....Highly recommended." ( Library Journal)
“De Lint weaves the individual characters' stories into a tight-knit whole, accompanied by music, love, pugnacity, frustration, and healing. Many of his faithful readers see the people he has created as kin they want to keep up with. Walk widdershins (i.e., counterclockwise) once and you may, too.” ( Booklist)

An ongoing De Lint character, Jilly, has further adventures after Onion Girl with the fantastical characters of Faerie and her love of music, art, and Geordie.

You don't need to read the prequels

Would you listen to Widdershins again? Why?

I will probably listen to it again in about a year. It's the kind of story that will reveal additional depths after one has fully absorbed the first reading.

This is a wonderfully complex story interweaving European and Native American mythos which makes you really care for many of the characters.

Have you listened to any of Kate Reading’s other performances before? How does this one compare?

I have not heard this narrator before. The overall performance was great.

Pay attention to the tag at the beginning of each chapter and those points where viewpoint shifts. It's important.

What I love about Charles De Lint is that he creates worlds that feels so real even though they are completely foreign. You feel like you can step into them and it would somehow make sense. Charles De Lint takes us into the Dreamlands, and the way they are explained and can change quickly; they can easily feel like places in my own dreams.

It explores Geordie and Jilly as a couple and what it takes for them to make the decision to stop being friends and take the nextstep. This is a book where two people who have had extremely bad childhoods and lives get to find happiness. This is not to say that Widdershins does not deal with themes of sexual abuse and trauma. It does. It also deals with the necessity of having to deal with ones past instead of locking it away and ignoring it. It is not something someone else can save you from.

Within the book Charles De Lint also explores the world of the faerie and the cousins and the unsteady peace found in the Dreamlands. Manifest destiny did not escape the Dreamlands and its effects have some similar issues dealt with in America. There were a few reviews I have read that have found this preachy but I did not find it so and enjoyed it. I highly recommend Widdershins.

Classic de Lint Story, But Not His Best Effort

Reading de Lint for me is like putting on my favorite comfortable sweatshirt; I enjoy the world he's built and care about its characters. However, I must say that this effort fell a bit flat.

More time was devoted to the internal dialogue of the magical characters than I recall from prior Newford novels, which seemed intriguing at first, but was ultimately not executed well. For example, one would expect the "Queen of the Faerie Courts" to be someone of significant wisdom and gravitas, but she came across as a particularly inept, one-dimensional bureaucrat. Her threats of "one word from me, and..." seemed almost comical after a while. The "Cousins" fared a bit better, but some of these are established characters from prior novels, and even then they seemed to lose something of their air of mystery. Finally, I just couldn't wrap my head around the "shadow" Christiana, who is inexplicably endowed with the wit and power to take on ancient faeries despite her relatively recent origins.

With all this said, if you're a de Lint fan, you'll enjoy both the story and the chance to catch up with old favorites Jilly and Geordie again. It's worth the read, and certainly long enough to get fully re-immersed in Newford.

I was caught in De Lindt's spell from the first chapter. Great characters, plenty of action, and an engaging story. He really knows his folklore!

something in the way Charles de Lint writes makes you believe it's all possible and it awakens the grace in each and everyone of us that read it.

What would have made Widdershins better?

If it ended after the third chapter. The entire rest of the book wandered over so much territory and after what sounded like the main story arc was done there was still four more hours to go. Edit it! Find different ways to explain something. Make it two books? Make it three? Drop some characters?


Would you ever listen to anything by Charles de Lint again?

Would you be willing to try another one of Kate Reading’s performances?

DO NOT listen to this around children. It involves very descriptive child abuse and rape references. Half of it sounds like it wants to be a bad childhood abuse self help book, the other, a weird mix of laggy adventure and interesting magic stuff.

I keep wanting to call this book 'fun', but it deals with some incredibly dark issues. It does that well, and balances the dark elements out with quirky characters and fantastic, surreal imagery. The concept of friction between the native magical peoples of Europe and the America is an interesting one, as well. There are a lot of things in this book that could've been hilariously bad or offensive, but were very well dealt with and made it better for that. Good narration, too.

The only negative is the constant, overwhelming fuzzy-wuzzy 'friends are family and we look out for each other, and together we can get through anything'. It's a nice moral to the story, sure, but it's just constantly forced down your throat. The book also felt like it was maybe the second in a series (that or the characters all just have immensely rich backstories which get referred to a lot). I'll have to look into that. It's not a negative, just something to note.

This ends up being a real feel-good book. My favourite character is Honey the pitbull. Because I had read the book before I was really looking forward to her appearance.

The reader is excellent, especially when voicing the Crow Girls, but she handles the huge cast of characters and multiple points of view with enormous aplomb. The writing works for her, of course, but you can always tell who is speaking as she moves between the characters.

I wish there were more of de Lint's books on audio - there are lots of them, after all!

brilliant story well read. charles de lint is a superb crafter of urban fantasy novels and this keeps you listening from start to finish