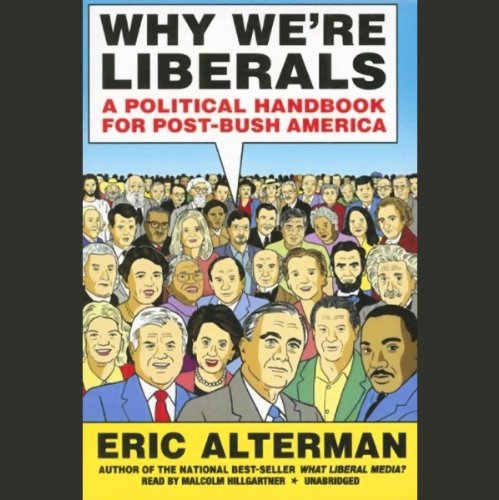 Thanks to the machinations of the right, there is no dirtier word in American politics today than "liberal". Yet public-opinion polls consistently show that the majority of Americans hold liberal views on everything from health care to foreign policy.

In this feisty, accessible primer, Eric Alterman sets out to restore liberalism to its rightful honored place as the politics of America's everyday citizens. In a crisply argued and extensively documented counterattack on right-wing spin and misinformation, Alterman briskly disposes of such canards as "Liberals Hate God" and "Liberals Are Soft on Terrorism", reclaiming liberalism from the false definitions foisted upon it.

Why We're Liberals is the perfect book for all of those ready to fight back against the conservative mud-slinging machine and claim their voice in the political debate.

A Must-Read for all Liberals

This is one of those books that I recommend without hesitation. Every Liberal and "progressive" should have a copy of this book (or audiobook). Not only does the author provide an incredibly detailed history of Liberal philosophy, but he uses the opportunity to debunk many conservative attacks in the later chapters.

However, this is a mixed blessing. I wish there was a 4.5 rating, because I really enjoyed this book, but I think the author may have slipped off his message a little in the last chapters. The author uses the later chapters of the book to debunk a number of myths about liberalism, such as "Liberals only want to tax and spend" and "liberals are elitist." Normally I think this is a great practice, however, I would have prefered if the author has used the opportunity to continue to explain and detail liberal philosophy. Instead the author falls back on pointing out how Conservatives are hypocrites in these various areas. I wish he would have continued to sing the praises of liberalism as opposed to pointing out the failings of conservatism.

Aside from that, great book. Like I said before, all liberals and "progressives" should have a copy of this book, if for no other reason than to help them understand the roots of liberal philosophy and the truth about the philisophy that has defined America for 200 years.