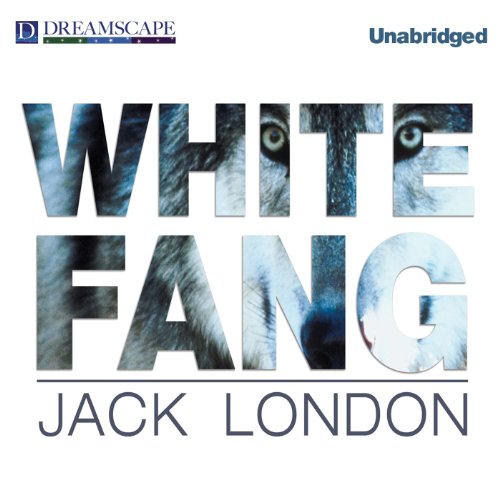 Five wolf pups are born, but only one survives. The lone pup and its mother must fend for themselves when the pup's father is killed by a lynx. Later, the pair is discovered by Native Americans. Grey Beaver, who recognizes the she-wolf as his late brother's wolfdog, adopts the pup and names him 'White Fang.' Targeted by the other pups in the Native American camp before being sold to a dog fighter, White Fang grows to be fierce, distrustful, and morose.

I sampled all of the many different narrations of this book available on Audible, and i thought that this one was the best. I am so glad i bought it, because what a gorgeous, gorgeous book. I saw the movie when i was a kid. They played it a lot on the Disney channel, but the movie was a whole different thing. This is not a story about a boy as the movie was, but about a wolf, and about the harshness of his life and of the wild, and... well i won't ruin it for you. Just know that the language of the prose is beautiful and exact, and so vital that it makes this novel seem too short. Definitely a credit well spent.

This book is a classic, no question. The language, the story, and the raw grandeur of it all make it one of the greatest books of its type and era. But as I suspect that many considering this audio book will have a fair idea of what to expect in terms of content, my main reason for writing this review is to praise the reader. There are many recordings of White Fang on audible, some negligible in quality, but I have found this one to be excellent. Perfect tone, pace and clarity, if you want a good reading of this book look no further.