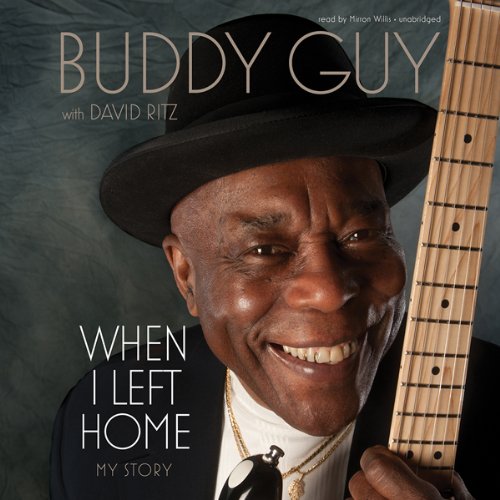 When I Left Home

According to Eric Clapton, John Mayer, and the late Stevie Ray Vaughn, Buddy Guy is the greatest blues guitarist of all time. An enormous influence on these musicians as well as on Jimi Hendrix, Jimmy Page, and Jeff Beck, he is the living embodiment of Chicago blues.

Guy’s epic story stands at the absolute nexus of modern blues. He came to Chicago from rural Louisiana in the fifties - the very moment when urban blues were electrifying our culture. He was a regular session player at Chess Records. Willie Dixon was his mentor. He was a sideman in the bands of Muddy Waters and Howlin’ Wolf. He and Junior Wells formed a band of their own. In the sixties, he became a recording star in his own right.

When I Left Home tells Guy’s picaresque story in his own words, those of a storyteller who remembers everything, including blues masters in their prime and the exploding, evolving culture of music that happened all around him.

Buddy Guy was born in 1936 in Lettsworth, Louisiana. He is considered among the best blues guitarists alive today. He lives in Chicago.

©2012 Buddy Guy with David Ritz (P)2012 Blackstone Audio, Inc.
“Buddy has never failed to amaze me first as an artist and secondly as a beautiful guy…Long may he give us his gift.” (Keith Richards)
“Buddy Guy was to me what Elvis was for others…[He] is by far and without a doubt the best guitar player alive.” (Eric Clapton)
“Guy is a vibrant and hilarious storyteller. With a natural ease and honesty, he captures the spirit of the age, the culture of violence in the clubs, and the personalities of his colleagues...Highly recommended for any fan of Guy and those interested in the history of blues music.” ( Library Journal)

Excellent History and Respect for The Blues

Would you listen to When I Left Home again? Why?

There's a lot of history here. It is told in a very personal way, fully accessible and very listenable. Great to get such perspective from Buddy Guy and those who were there during this era of Blues awareness.

No question, Buddy Guy although those he comes in contact with each have their own appeal.

I might. It took a bit to adjust to Willis's performance but once I got into his rhythm it was a joy ride

It's a terrific compliment to Gregg Allman's book - great background on what was happening in the music industry told through the eyes of a couple of central figures.

A must for blues fans

This one is, indeed, a must for blues fans. Buddy Guy's story is compelling--from working in cotton as a child to being a world-wide acclaimed guitarist. The history he tells of other blues musicians over the decades, however, is priceless. After listening to this, you will probably be a greater fan of Buddy's and you will have loved all the stories he told along the way.

Buddy Guy is simply the best

Hearing Buddy's words about his life and the greats who helped him on his way (Muddy Waters, Howlin'Wolf, BB King) was simply fantastic. Just wish some of his music came with it. Oh well......just had to go to Amazon.

As a music industry veteran of 44 years, I was a little wary of a musician trying to be an author. I'm a strong believer that people should "play their positions", I.e., stick with what you know. I can't tell you how many major NBA and NFL players have asked me to help them start a record label with NO experience, like I didn't put in decades and years of law school in order "to play my game". Championship rings and a spare $5 million does not make you into Barry Gordy or Jimmy Iovine or even ME! I would never presume to play one-on-one with Shaq - why did he think he could rap???

But blues great Buddy Guy successfully pulled off this change in careers. He had a co-writer and a very good one. This story is well told, honest, entertaining and educational. I started my career in recording about 10 years after Guy, at the height of his popularity. His depiction of the business at that time is on the money. Narrator Mirron Willis - one of my favorites - is the perfect narrator. His mellifluous engaging voice keeps the action moving while "keeping it real" with true-to-life depiction of not only the voices of black people but how we say things which can mean something different based on our intonation. This is the REAL story behind the "Cadillac Records" movie without the poor gratuitous casting of the wooden Beyoncé Knowles as Etta James, plus more about the Chicagoblues players like Muddy Waters, Howlin' Wolf, Little Walter, and Junior Wells, plus B.B. King and Ike Turner, who inspired white artists like the Beatles, Rolling Stones, Eric Clapton and John Mayer. Buddy Guy's life story is one of a phenomenal talent who retained his good heart and respect for others in an industry that will make a lesser being sell his soul to the devil.

The Unsung Hero of the Blues is Getting His Due

Would you consider the audio edition of When I Left Home to be better than the print version?

I'm not sure if the audio version is better than the printed version. Having seen Buddy Guy perform in many different settings, I imagine his voice different than the audio of the Narrator. That having been said, Mirron Willis does not detract from the story.

What other book might you compare When I Left Home to and why?

Would you listen to another book narrated by Mirron Willis?

I would listen to another book narrated by Mirron Willis. He did a fantastic job with the details of the voice that made each character in the narrative distinctly different.

This was indeed a book that I wanted to listen to all in one sitting if that was possible for me.

I think Buddy did a good job sharing his life with his audience. However, I found myself wanting more details or more of his life's tales. Especially more of the interpersonal experiences of the day to day, not just the life defining moments of his career.

Great book for a lover of the blues!

This book is a masterpiece!
One of the best music bios I have ever had the pleasure of ingesting

Buddy Guy starts his tale down in Louisiana. He describes his modest rural beginnings and his discovery of the music that's made him a hero to Blues players and fans worldwide. He takes the listener along on his journey from the juke joints of the rural south to the Royal Albert Hall, playingwith Eric Clapton. He tells his tale with humor and humility painting a vivid picture of the Blues and its many colorful characters.
As a Blues Artist and longtime Chicago resident myself I deeply appreciate how intimate and human this story is. It made me love Buddy even more than I did before.
My only negative is that the reader doesn't sound anything like Buddy Guy or anyone from the south or any Blues person I've seen. He sounds like the guy who played the Captain on Deep Space 9. If you can get past that detracting this is a first rate read. I plan to buy the hardcover and have Buddy sign it next time I'm down at Legends.

Great story, great performance and a great man! One of the best Audible books I have purchased. The Blues lives on....

A must for any music fan!

It is eally fascinating to hear about how the real blues legends lived! Well done!

This book about buddy guy aka “The Budd” is the best autobiography ever written.
A must read for any musicologist or historian!

Wonderful and humbling to hear the story of this great inspiration to many modern blues artists. We forget how hard life is for some and how much blind faith played into their hands. Were it not for Buddy and artists like him, we would have such rich history in this music that shaped modern rock and pop genres.

Some stories about legends

Buddy guy tells his story, some great anecdotes about his time in Chicago. Chess records and Jr wells ..

First, I have to admit to being a big fan. Blues is the blood that keeps me alive. I was very excited to find out this audio book exists.

And it lives up to my expectations. A fascinating life full of the most wonderful list of characters that ever existed. Highlights for me include Buddy's first meeting with Muddy Waters and the poignancy of so many stars extinguished in the book's latter chapters.

Although I have read many a blues memoir, there was still so much I learned, so many stories from this humble, modest superstar.

The Narrator is superb, a rich smooth voice that fits perfectly.

Looks like I'm gonna have to buy the book too.

An insight into one of the last great Bluesmen

The bluesplayer's bluesplayer, Buddy Guy is often sited by many of the blues-rock hierarchy as a major influence their paying and style and Clapton even called him the greatest guitar player ever. Praise indeed. I guess many may be familiar with his musical achievements and eventual and much deserved recognition, the accolades and hopefully eventual financial reward in his later years, but listening to his story, you get to hear what an amazing journey he has been on. Name almost any famous bluesplayer, past or present and Buddy has worked with them all. I wasn't hopeful of this book, but once I started out listening I just didn't want to stop. It's an amazingly frank and colourful rendition of the major events in Buddy's life and if anybody deserves fame, Buddy has surely earned it. Buddy and BB are the last of the truly great American bluesmen and lives like theirs and the pathway Buddy took from the cotton fields in Louisiana to the blues clubs of Chicago probably won't ever be repeated. If you've got any interest in the blues, or blues-rock then this book gives an amazing insight to that side of the American music industry from the late 50's onwards. If you're a fan Buddy's you'll get an insight of how many of his famous tracks were cut, and time after time I found myself pausing the book to go and listen to the music before returning to the audio book. I was a tad disappointed it wasn't narrated by Buddy himself, but Mirron Willis actually does a great job and captures the mood perfectly. If there's any downside, it's that I was lefty wanting more. There a quite a few leaps in time during the book, and sometimes I though perhaps I'd got an abridged version; I wanted more detail. I'd liked to have heard a bit more about his family and relationships but these are glossed over in brevity, but in other respects the book is incredibly bare-faced and honest. If you have any interest in the blues or just want to know about one of the last great bluesplayers, then this