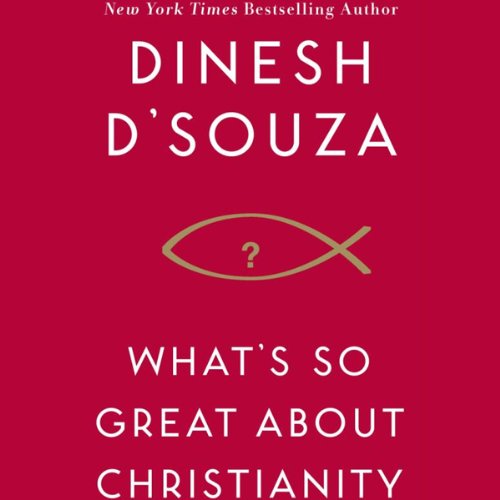 Is Christianity obsolete? Can an intelligent, educated person really believe the Bible? Or do the atheists have it right? In his new book, best-selling author Dinesh D'Souza ( What's So Great about America) investigates both Christianity and atheism and their influences on culture to show why there is, indeed, something great about Christianity.

Challenging the assumptions of both believers and doubters, D'Souza demonstrates: how Christianity created the framework for modern science and is compatible with the theory of evolution; how Christianity explains consciousness and free will, which atheists have to deny; and why, against all expectations, Christianity is the fastest-growing religion in the world, while secularism and atheism are on the decline. He argues that, ultimately, you can't have Western civilization without the Christianity that gave it birth.

This is a great book to understand the current arguments being launched by atheist. One of the topics that I especially appreciated was D'Souza explaining the true story of Galileo, the "Martyr" of Science. This is much more complicate political situation than was ever historically portrayed to me. It was always a black and white story of suppression of scientific thought by religion. Before I was a Christian, I used the old Galileo story to marginalize faith to my Christian friends. "It is easier to believe a lie that one has heard a thousand times than to believe a fact that no one has heard before." - Anonymous

I whole-heartedly believe D'Souza the systematically elimination of religion from schools and public life has not made society better, but worse.

This was an excellent book and I highly recommend it

Where does What's So Great About Christianity rank among all the audiobooks you’ve listened to so far?

D'Souza is well read, on point, truth oriented and well written. I was built up by the way he fashions his arguments and states his points. Do not hesitate to jump into this book!

This is a great book ... well written, well argumented, up to date with the latest developments, and the narration is first class ... a real joy to listen to. This book covers a comprehensive spectrum and tackles root issues head-on. The author takes aim at the latest anti-Christian best sellers and hits the mark every time. The arguments are easy to follow, understand, and remember. The author's take on Emmanuael Kant's theory of perception was a breakthrough for me. For me this is the best book in this field that I've had the priviledge to read/listen to (and I've read many).

There was a lot to like in this book

There was a lot to like in this book, but unfortunately it didn't quite come together to rate a five. The author was very thorough in his arguments, but that resulted in what seemed like going over the points that he had already "proven" (to his own satisfaction) several times. There are better books available on Audible if you are looking for apologetics such as Francis Collins' book on the Language of God, but the author does a credible job trying to cover a broad array of arguments.

The Greatness of Christianity is Christ.

Solid Apologetics For the Modern Mind

I loved this book. I have some Atheist friends and it's good to have some of their arguments examined by a scholar like D'Souza. He takes them seriously and argues honestly which is what I try to do. I only wish I could get them to take my questions and points with the same amount of openness and respect. If you're a believer, this book will bolster your faith. If you're agnostic, this book will challenge you and help you understand where us Christians are coming from. If you're an atheist or an angry atheist you'd be hard pressed to find a more cogent commentary on the whole faith/science debate from a Christian perspective. It may be worth at least understanding that as you continue your conversations with believing friends or frienemies.

Wow! What A Great Book!

I wasn't so sure what I was getting into when I first began reading this book but it turned out to be a fantastic read. I love the way it flowed from giving Christian believers some bullet points that would harm them against the rest of the nonbelieving world. But, then the book began giving us some great historical overviews that really helped understand and frame the arguments, all without making it a big us against them debate.

I don't tend to read and reread books too often (or in this case listen and re-listen) but this is a book that I just might do that with!

very disappointed, the Author ignores what doesn't fit his narative, but cherry picks what fits.

What did you love best about What's So Great About Christianity?

I enjoyed the broad variety of topics covered, especially the historical discussions.

No. The content was such that it inspired you to think and ponder what the author said or asserted.

A worthwhile read for those of strong faith, those who are questioning their faith and even those who are not of any faith but are curious and would listen with an open mind, to be convinced or not convinced--not through Scripture, but through logic and what noted atheists have to say on the various topics discussed.

This reading provides a thorough and in depth analysis of historic and contemporary issues confronting the modern practice of Christianity. Complex philosophical, doctrinal and cultural ideals are presented in a fairly understandable manner. This reading is an excellent primer and I highly recommend it to both Christians and non believers.