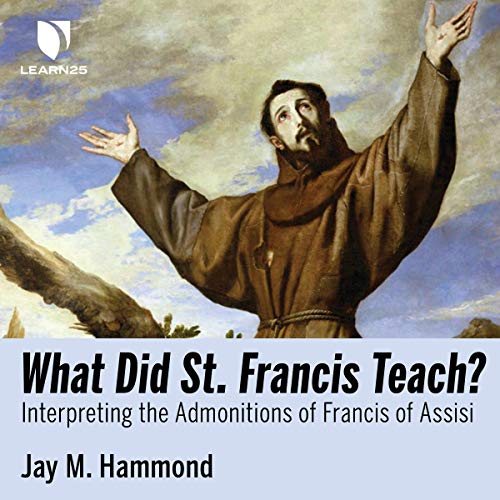 What Did St. Francis Teach? Interpreting the Admonitions of Francis of Assisi

Saint Francis of Assisi did not "play it safe".

Francis is one of Christianity's best known figures, often depicted as a sensitive and passive saint who communes with nature. But Francis' Admonitions, written toward the end of his life, between AD 1223 and 1226, are far from passive. Join Professor Jay M. Hammond in his nine-lecture series, What Did St. Francis Teach? Interpreting the Admonitions of Francis of Assisi, as he explores and expands on the infamous Admonitions of St. Francis of Assisi. Through this course you will come to understand Francis' life and teachings anew. You will be able to relate more than you thought possible to the context of the Admonitions as well as the teachings and meanings of St. Francis' words.

Francis wrote the Admonitions at a time of economic decline, international conflict, and marginalization of powerless classes, much like the times we live in today. But instead of addressing these social issues directly, the Admonitions focus on the day-to-day relationships that form specific communities and, by extension, society more generally.

The Admonitions' intricate structure, literary devices, word associations, and comparative contrasts all work together as catalysts for spiritual insight into a Gospel-inspired "form of life" that must be embodied by words and deeds.

In this program Professor Hammond will show you how to explore these works with him and for yourself.

This insightful lectures series illustrates the challenges faced by the early Franciscan movement and sheds light on how Francis and his followers faithfully responded. It's a perfect course for those interested in Franciscan history. It's better suited to understanding how Franciscan traditions evolved than to exploring contemporary issues. Hammond is a bright young scholar shedding new light on a vital tradition.