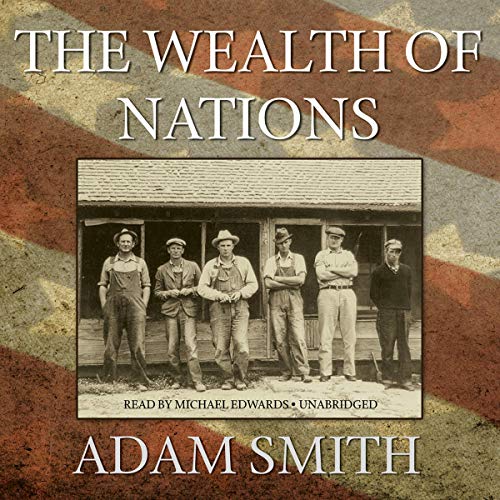 This classic statement of economic liberalism or the policy of laissez-faire was first published in 1776. It is an engrossing analysis of the economic facts of life. Several fundamental principles, many of which are now referred to as axioms, were introduced in this work, the division of labor, supply-and-demand, and free market capitalism being among the most obvious. Smith's political economy is primarily individualistic; self-interest is the incentive for economic action. However, he shows that universal pursuit of self-interest contributes to the public interest.
(P)1989 by Blackstone Audiobooks

This is a massive undertaking for any listener, but ultimately worth the effort. The recording is not the best, with some occasional disconcerting popping, which made me think stones were hitting my windshield as I drove. Edwards's plodding reading takes some getting used to, but it ultimately works, allowing the listener to unravel some of Smith's winding thought. This is not for everyone, but if you can get inside Smith's detailed descriptions of late 18th-century economics, you'll appreciate his analytic mind -- and you might even imagine him a prophet of the emerging capitalist system. Of course, capitalists never tire of claiming Smith as one of their own, usually with only a familiarity of Smith's image of the invisible hand, but there is much more here, especially in Smith's criticisms of the excesses of the "masters." Smith may still be construed as an apologist for our present capitalist system, but his thought much more compex than that, and a must-read/listen for anyone wanting to tackle David Ricardo or understand Marx. A printed copy of the work is handy when the spoken argument bogs down, but even with a more than occasional use of the reverse button when I drifted, I was surprised how easily I got into the rhythm of this work.

I would love to be able to listen to this book in a better quality audio. It really needs to be rerecorded. The quality is so poor it's hard to listen to and I have not been able to get through it.

The footnotes ruined it.

Smith's book is of a piece. This audio book is impossible to follow, because the narrator reads the scholarly apparatus right in the stream of the book. So you'll have a paragraph of Smith, and then two paragraphs of footnotes from the editor, then Smith for a couple paragraphs, then another footnote... it makes it impossible to follow the development of Smith's argument. Audible seriously needs to get another version of this book.

Audio Quality is VERY poor for this book.

if you are interested in this book, you should check the audio quality, it is very very poor in this edition.

This book should have been done in resolution 4 instead of 2. Had I noticed, I would not have purchased it.

The Voice Quality Not the Book

The Voice Quality of the book is terrible, Couldn't judge the content since the voice quality is aweful !

I was astonished to see this book with a low rating, but relieved to find the reviewers uniformly complaining about the recording quality. I entirely agree, but want it perfectly clear that this is a GREAT work. Smith is reminiscent of Aristotle in his ability to reason incisively from direct observation and to organize his perceptions in a clear and concise way.

DO NOT GET THIS TITLE

While the book itself is probably quite good, the recording leaves an immense amount to be desired. The compression on the sound is so heavy that you feel like you're listening to someone talking on the telephone only worse! Frankly, I'm shocked that Audible makes this crappy recording available!

The best audio format available is 2, and it sounds like a garbled robot. I cannot even listen to this book.

The text is obviously very dense and a lot to get through, but this audio recording makes it impossible. It sounds extremely outdated, and is very distracting.

Massively disappointed with the sound quality of this recording, to the point where this is impossible to listen to.

This is really hard work to listen to, but not because of the content. The sound quality on this was so poor, I had to give up after the first chapter. It sounds like it was recorded on a dictaphone in the mid-80s and the oxide on the tape has started to go.

Not a suitable subject for an Audible Book.

Apart from the appalling sound quality, this is a subject of such complexity that it can't be communicated in this way. The ideas are presented too quickly and briefly to allow the listener to reflect on what they've just heard. This compares unfavourably with using a hard copy, where the reader has a chance to reflect on a new idea and,if necessary, re-read the paragraph.

Muffled!! Impossible to hear!! I was very disappointed, having so looked forward to hearing this book.