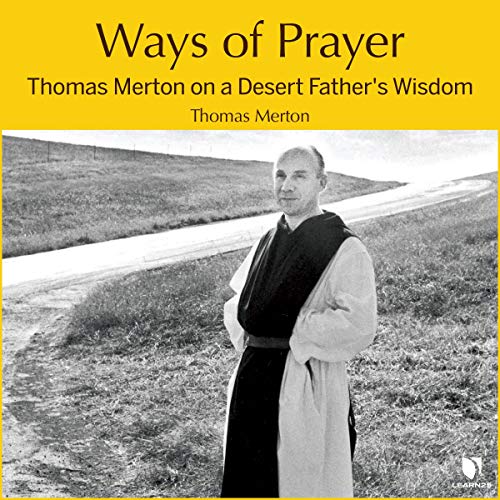 Ways of Prayer: Thomas Merton on a Desert Father's Wisdom

Join Thomas Merton in exploring one of the most influential figures in the history of spirituality. Delivered in 1962 to the novices at Merton’s monastery, these talks allow you to hear his voice and experience his powerful teaching.

Born in the fourth century, Saint John Cassian (AD 360 - 435) lived when tensions between the traditional and innovative peaked. A monk and theologian, Cassian made the Christian tradition relevant for the needs of his day in his spiritual works. Indeed, his spirituality remains essential today; he influenced Saints Benedict and Ignatius of Loyola, and his works continue to be read worldwide. These remastered recordings of his lectures give you the opportunity to discover the vitality of Cassian’s philosophy of prayer with Thomas Merton as your guide.

A teacher par excellence, Merton breathes new life into ancient texts as he passes tradition onto novices. Merton’s conferences are not didactic presentations about Cassian’s teachings but meaningful applications of them to the modern world. Cassian integrated Eastern monasticism into Western thought, and his Conferences provide the principles of monastic life: unceasing prayer, charity, and asceticism. Especially compelling are his teachings about prayer and virtue and his examination of the “prayer of fire” as the goal of contemplation.

Merton guides you through these topics and more in his captivating talks. You will discover why the mysticism of John Cassian is cherished in the monastic tradition and the wider Christian community alike. These conferences will inspire you as you explore your own spiritual life. This set includes an afterword by Fr. Anthony Ciorra.

In this series, the last chapter is actually the introduction. I recommend listening to it first. I feel almost like I personally met Merton in this series.

It was a joy and privilege to hear Thomas Merton’s voice. He truly moved my soul.

Merton at his best

Great recording of Merton teaching... the combination of wisdom and humor as he involves novices in understanding prayer through the lens of Cassian.

A classic Merton must- listen


Merton at his finest. Discusses Cassian and the way of prayer via desert spirituality. A must-listen.

I fell in love with this guy some time ago. He is a good conduit of Truth for me.

As an ex monk I could really appreciate this!

Merton meanders confidently like a seasoned swimmer relaxing with back strokes! Beyond religious contention and heated debate by unholy know it alls-this is charming listening and took me back to the good parts of being a young monk brimming with ideals.
Merton covers a lot of ground on Cassian and some other church fathers. He has great humour and was clearly a great teacher! He is very interactive and interesting! these lectures remind me of the depth of monastic and church tradition and it's dedication to the God filled pursuit of holiness.
Merton has some fine tips for ecumenism: that we learn from each other- but can't escape descending into superficial caricature when describing the Protestant notion of sola fide and salvific assurance by faith alone. Nevertheless it's made me protest less! And I went to my local monastery today to Vespers!! I'll be getting more Merton audio lectures.
The final chapter is by a priest theologian who nicely introduces Cassian. This would actually be the best place to start for a fuller appreciation of Cassian and what Merton was trying to achieve in these spiritual conferences. Cassian is the man who brought monastic desert spirituality to the west, disciple of Evagrius and teacher of Benedict. Maybe it's in the desert of authentic prayer where real unity can happen among Christians today! It wont be by verbose debate anyway!

Great teachers inspire those the teach. Merton does just that as he imparts discoveries and experiences to his audience, as well as today’s enquirer or listener. Seekers of wisdom, grace and faith will be encouraged by these conferences.

The lectures, punctuated by birdsong, the bells of the Office and abrupt class conclusions, reveal lives dedicated to the discipline of prayer within community. There is a sense of glimpsing the private lives and hearing private thoughts found within the monastery.