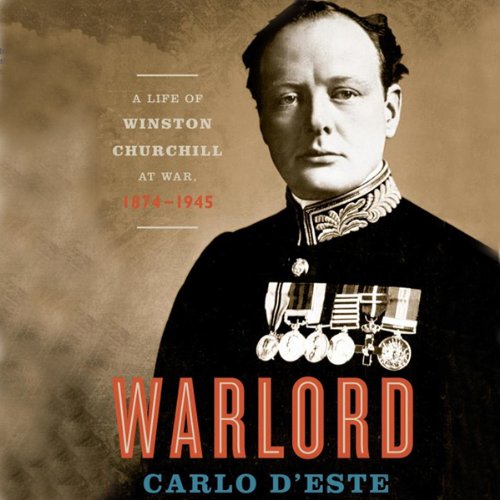 Carlo D'Este's brilliant biography examines Winston Churchill through the prism of his military service as both a soldier and a warlord: a descendant of Marlborough who, despite never having risen above the rank of lieutenant colonel, came eventually to direct Britain's military campaigns as prime minister and defeated Hitler, Mussolini, and Hirohito for the democracies.

Warlord is the definitive chronicle of Churchill's crucial role as one of the world's most renowned military leaders, from his early adventures in India and the Boer War through his extraordinary service in both World Wars.

As riveting as the man it portrays, Warlord is a masterful, unsparing portrait of one of history's most fascinating and influential leaders during what was arguably the most crucial event in human history.
"Elegantly written, this tour de force belongs in every library addressing the 20th century....D'Este is a master analyst of 20th-century military leadership, and this book may be his finest yet." ( Publishers Weekly, starred review)

If you could sum up Warlord in three words, what would they be?

A great story of personal endevour and achievement, completely marred by dreadful pronounciation of English and Scottish placeneames and surnames and incorrect emphasis on syllables in common English and English military terms. The story of a truly great English statesman, ruined by horrible ear-gratingly poor pronounciation. Why couldn't it have been read by an Englishman?

Get someone who can speak British English to narate it, not an American who doesn't understand how badly he is mangling the English pronounciation!

Spoiled by lack of attention to getting a good narator.

Relating all the Good & Bad about Winston Churchill I found D'Este had brought to life another great man from history & into the very room I listened in. Very Very well done!

Forget Boris's book. This is much better!

Level headed and revealing biography, concentating on Churchill's political and military career but with plenty of references to his social life and private thoughts. Puts the man in the context of his times. And by doing so, tells us much about the dramatic times he lived through.