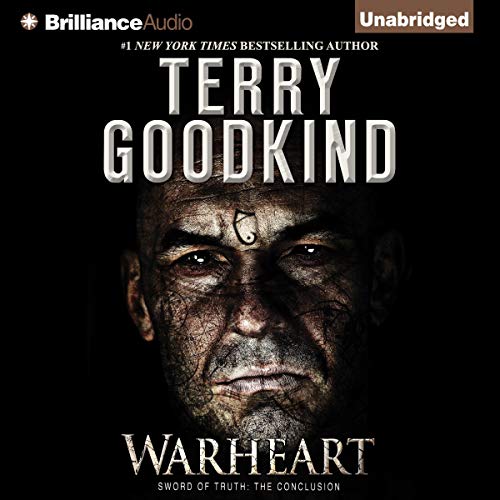 Soul mates, pawns of prophecy and inheritors of an ancient conflict, Richard and Kahlan's destinies have been bound together since their first encounter in Wizard's First Rule. But now Richard lies on a funeral bier - suspended between the worlds of life and death and Kahlan faces her greatest challenge. She must fight for Richard's very existence, and Richard, trapped in the underworld, must fight to keep the world of life from ending. Desperate sacrifices are required. This is the final battle in a war three millennia old, a war that saw the Sword of Truth forged, a war that could mean the end, not only of their lives, but of their world.

For fans of the Sword of Truth series only...

Having been a huge fan of The Sword of Truth series over the years, it really breaks my heart to admit that this last story arc just isn't very good.

I loved the characters - always have, and always will, and it was a rush seeing Richard and the rest in this new book, as well as cameos by characters from previous books. However the book itself I thought was poorly written, a contrived mess strung together by a series of long boring repetitive lectures from the characters, and constant uses of the Chekhov's gun and the deus ex machina mechanics.

If often felt like the author had random elements he wanted introduce and a few serious loose ends to close off, but didn't know how to make a great story out of them, but thought he would just randomly throw them in there anyways.

To explain what I mean without spoiling the book, I want you to imagine the movie "Taken". Imagine if the actual movie went like this:

- After his daughter's kidnapping, Liam Neeson's character goes to a diner to get breakfast.

- The waitress walks to Neeson, puts down a glass of water (with two slices of lemon), and then writes down his order of eggs.

- Neeson gives the waitress a 30 minute lecture on the origin of eggs.

- Follows... by a scene of the cook giving Neeson a 20 minutes explanation on why he cooks eggs the way he does.

- The cook turns to return to the kitchen to start cooking the order, but suddenly a 2nd cook (who was revealed to have shown up there 5 minutes ago, due to a mix up with the shift roster) shows up with a plate of eggs, which he had just now made for another customer, who had to leave the diner.

- At that moment his daughter's kidnapper walks into the diner (with the daughter, of course), wanting breakfast, in particular, eggs. Neeson tells the waitress to give the kidnapper the eggs.

- The kidnapper, er- eats too fast, or something, chokes, and dies.

- We then get a 20 minute lecture by Neeson to his daughter, on what speeds one should eat, and how eggs can choke a man to death.

- The end? NO! The daughter reveals there is a micro bomb on the man, in his pocket (that is set to explode and kill everyone in exactly 7 seconds), which can only be deactivated if a man with Parkinson's swallows it, with, a glass of water (with two slices of lemon).

- Suddenly Michael J Fox goes into the diner, says boy am I thirsty. Neeson throws the bomb into the glass the water, Fox drinks it. Daughter is rescued, and the day is saved.

Okay, so a poorly written review, I admit, and granted, I was biased going into this latest book - I thought Goodkind had jumped the shark with the Richard and Kahlan trilogy, introducing zombies (call them what you will, they ARE basically zombies), but bottom line is, I was not impressed.

If you are a fan of the Sword of Truth series then this is still a must listen/read, being a continuation and end to the series. However if you are new to the series, I suggest you avoid it.

I've been with this series from the beginning (Wizard's First Rule). I don't know what's happened in the last several books, but the quality of writing has become *terrible*. It's as if Terry Goodkind now has a 12 year old ghost writer. His books used to be great. Now, for instance, there's apparently some mandatory rule for one of the characters to ask the exact same question "What are you talking about?" at least every 30 minutes (has anyone else noticed this? Did this book even have an editor???). The only reason I've stuck it out this long is because the story itself is somewhat interesting, even if the journey has been incredibly frustrating. Interesting ideas/story, but *awful* writing. Maybe the author is getting senile, or (far more likely) he really has handed the series off to a ghost writer to implement his ideas. Either way, it's a real tragedy.

feels as though the story was rushed just to complete the series expected a lot more. as large a fan following as Terry Goodkind has created with the Sword of Truth series I would have expected the book to be a little longer and better written. I finish this book and I want to cry. not just because this series is over and I loved the entire series with the exception of this book so much but because it feels so incomplete and terry has said there will be no more.

I would recommend the series to a friend, but warn them of my frustrations with Terry's writing style. I would also recommend print over audio in this case

The Sword of Truth Series is a brilliant story line, and this last book does a wonderful job tying everything together. Unfortunately there are lot of things in Terry Goodkind's writing style that drive me crazy...over explaining things, over use of certain terms for dramatic affect, repeating too much backstory. In print, I could glance through those things that bothered me, but in Audio, I'm stuck listening.

The narrator is likely a very good narrator, and I can see him doing Shakespeare, but he is not a good match for this book. His tone 'drawn out' for lack of a better term, especially confusing when it's happening in sections where I would expect it to be fast paced. He also seems to make many of the characters sound rather condescending.

kind of a let down

I've waited so long for this addition to the story and, I don't know, I'm probably being picky but I wanted more.

Not totally surprised after the last four books after the performance from this author. It's completed and summed up in a really shitty way. Lots of blabbering and nothing of the enthusiasm that were in the first books. One would think the wizards rules would mean something, that we would meet gratch, mud people or some dragon again... perhaps Richard using his gift as all other books worked toward ... but nope. This sucked, hard. 1/10 would not recommend.

The weakest of all the books :(

This is the most preditacable of all the SOT books and the one where I just wanted to be over. Some part seems rushed others are long and winded from explaining the most boring trivia.

If this is the last book in the series it will leave me disapointed, but I rather it ends now like this then another one just as weak.

Sam is the highlight, good job.

The end of an era

I have been with this series since Wizard's First Rule and although I am sad to see the series come to an end, I couldn't have asked for a better way. The final line summed up everything so well. This is the first time I decided to do an audio book in the series and I am glad that I did the reader was magnificent. I would recommend this series to anyone that loves a good story with well-developed characters that you can relate to.

The plot and story are riveting. Unfortunately the author is maddeningly annoying. He repeats himself constantly, incessantly reiterates the obvious and goes on preaching rampages. The book could have been written in half its length.

I wish the story wasn't over!!

I have loved this series from the very beginning! It has been a bold statement about the condition of the human race, and the battle constantly fought within ourselves to choose love over hate, good over evil, and self worth and life over moral bankruptcy and death. Bravo Mr. Goodkind! I cannot wait to see what is next!