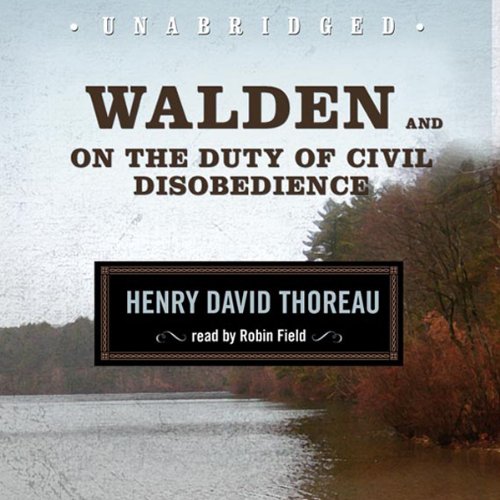 In the early spring of 1845, Henry David Thoreau built and lived in a cabin near the shore of Walden Pond in rural Massachusetts. For the next two years, he enacted his own Transcendentalist experiment, living a simple life based on self-reliance, individualism, and harmony with nature. The journal he kept at that time evolved into his masterwork, Walden, an eloquent expression of a uniquely American philosophy.

During the same period, Thoreau endured a one-day imprisonment for his refusal to pay a poll tax, an act of protest against the government for supporting the Mexican War, to which he was morally opposed. In his essay, "On the Duty of Civil Disobedience," Thoreau defends the principles of such nonviolent protest, setting an example that has influenced such figures as Gandhi and Martin Luther King, Jr., and endures to this day.

Public Domain (P)1997 Blackstone Audio, Inc.
"Walden is a major philosophical statement on the American character....as readable and perhaps even more timely than when it was written." ( Masterpieces of World Literature)

The quality of the narration is excellent, particularly in tones and emotions imparted.
Some negatively comment on the slower pace of the reading.
I think the tempo is appropriate, if you are the type that require faster digestion of information then I would recommend some other topic entirely.

I will not review the author or the content, you know what you have searched for.

Better Than I Remember

I first read (forcibly) these books as a sophomore in high school, and enjoyed it as much as a tooth extraction sans novacaine.
My return to these works is spawned by a curiosity of what I failed to grasp in my youth. Grateful for that curiosity, am I.
Thoreau was a brilliant observer of human kind and its behaviors, as well as a student of great minds. His words would be well referenced in today's political storm, both by our leaders and those abroad.
Robin Field delivers these words in a manner that I often thought Thoreau was reading to me, his own works. I occasionally wondered at the pronunciations of words, considering that when this was written, perhaps those words were newly contrived in the world which Thoreau resided.
I truly enjoyed these books.

Outstanding Reading of a Classic

I really felt as if it was being spoken by Thoreau himself. The cadence of the reading is oddly soothing, as Thoreau walks us through his daily life at Walden Pond. Listening to his essay on Civil Disobedience was an easy way to approach this classic, and I found it inspirational and ironically relevant to our current political climate.

When Thoreau discusses philosophy his concepts are very enlightening. I may not have as good a grasp on his material as more learned people, but a large portion of Walden is dedicated to his observations of the pond and wildlife there. If your interests are in his observations then you will be content. However, for myself, I did not come to this book for that. I also put the narrator's speed at about 1.55x because it was too slow for me, especially for listening to descriptions of nature.

Again, Thoreaus' philosophical principals are very intriguing, but I do need to listen to it again as they are deep with meaning. Good listen, highly recommend the beginning and end of this audio book.

As I sometimes struggle to find hope reasonable Thoreau's words describing his experiment in necessity and strident libertarianism lift my flagging spirits. Sure, he's a simple, privileged, educated white man, who may overuse proof by allegory to justify his many faiths, but perhaps that's the very moral inkling our troubled times need? If you want me I can be found among the strawberries practising husbandry.

This book is my bible

I have grown up with this book playing. Robin Field is the voice of it, and no one could read it better. This has really shaped the way I live my life and see my place in the world. It's audio format is the way to go and enables you to listen to it while working and walking and being in nature. I built a cabin while listening to this and have heard it many times since. This is american philosophy.

All time classic a must read/listen. Be prepared to take your time as the author intends for you.

This is a book that should be listened too. The narrator pace however is quite slow and I was able to listen to the audio on double speed and still have a firm grasp on the words. The irony of it all is that Walden is about slowing down, being still and using basic resources. Yea, still not giving up my ipod!

I wished to live deliberately

I was surprised how much I enjoyed this book. It well written and engaging even over the most mundane. For a 19th century writing, it still comes across fresh and is surprisingly reflect of modern sentiments.

Another brilliant narration by Robin Field. He excels at American non-fiction works of the nineteenth century, and I must explore his range further.

chapters in the wrong order

i got to chapter 4, then after looking up the book to discover the chapter titles (as they are not given on audible), I came across the chapters in summary with quotations given. at this point i realised that this audibook is in the wrong order. chapter 4 on the audiobook is in fact chapter 2 of the book. what a waste of time! returning immediately.