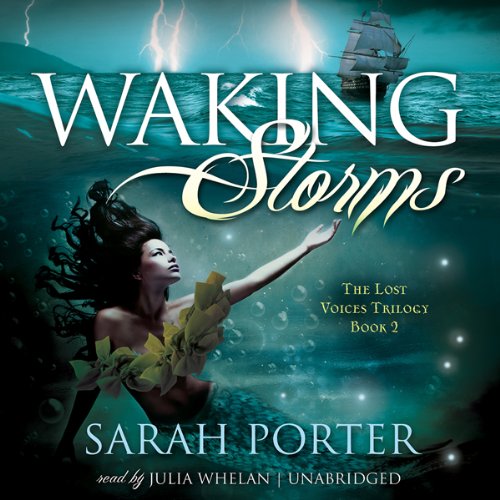 “We have lingered in the chambers of the sea, by sea-girls wreathed with seaweed red and brown, till human voices wake us, and we drown.”

After parting ways with her troubled mermaid tribe, Luce just wants to live peacefully on her own. But her tranquility doesn’t last long: She receives news that the tribe is on the verge of collapse and desperately needs her leadership. The tribe’s cruel queen wants Luce dead. Dorian, the boy Luce broke mermaid law to save, is determined to make her pay for her part in the murder of his family. And while the mermaids cling to the idea that humans never suspect their existence, there are suddenly ominous signs to the contrary.

But when Luce and Dorian meet, they start to wonder if love can overpower the hatred they know they should feel for each other. Luce’s new friendship with an ancient renegade mermaid gives her hope that her kind might someday change their murderous ways. But can Luce fulfill her rightful role as queen of the mermaids without sacrificing her forbidden romance with Dorian?

Full of miraculous reunions and heart-pounding rescues, this haunting second installment in the Lost Voices trilogy finds Luce eager to attempt reconciliation with humans - as long as war doesn’t break out first.

About the author: Sarah Porter is a writer, artist, and public school teacher. The Lost Voices trilogy is her first foray into the world of novel writing. She and her husband live in Brooklyn.

Pushing the Boundaries of YA Fiction

It's been over a year since I read the first book in this trilogy (where did that time go?!). When I did my initial review, I remarked that the YA market is overcrowded with generic books dealing with mermaids (and vampires, and angels, and zombies...), and that anything that stood out would be genuinely welcome. With mermaids especially, it's almost like the subject matter leaves every writer and reader with more essence than substance. Such was the case with the first book, but... since then, the siren song started calling.

As with the first book, the lyrical writing style sets this one apart from others in its class. And just as in the first book, teenage angst is set aside in favor of real tragedy, hope, and actual story. If not for the fact the lead characters are teens, I'd believe this was more than a YA novel. Sarah Porter has tapped something dark and primal with this trilogy. The standard and expected tropes are there for the asking, but this story has pushed the boundaries of the mermaid concept about as far as anyone ever has, insofar as I'm aware. I'm pleased to say that whatever inspired me to pick up book 2 after all this time ensured that I won't wait nearly as long for book 3.

This book, honestly reaffirmed why boys suck. The main character is so sickeningly annoying , but I have to remember she’s 14 but even then. How ignorant and self destructive could a being be.
Sarah Porter is awesome with her writing.

Well I started the trilogy so I have to finish it. I’m sucked in and generally it keeps getting better. But jeez, the whole “romance” is just a whole lot of stupid and selfishness. Except, it worked for it in the end, but during I made a TON of eyerolls. But I’m ready for the last one!