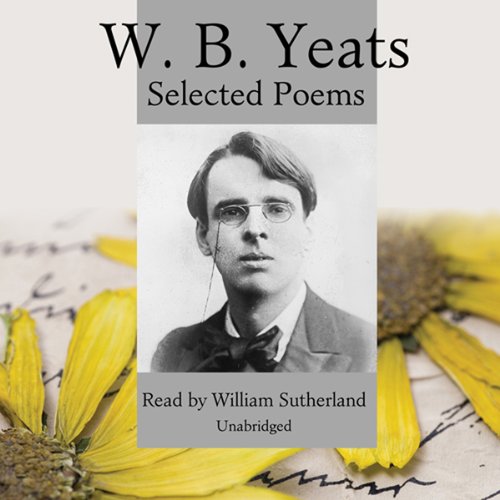 William Butler Yeats, the first Irishman to win the Nobel Prize for Literature, is not only one of the greatest poets of the 20th century but one of the most widely read. The landscape, myths, legends, and folklore of his homeland lie at the heart of his poetic imagination, and the unique musicality of Ireland adds to the richness of his verse. But the themes of his poetry are universal and timeless: the conflict between life and death, love and hate, and the meaning of man’s existence in an imperfect world.

This collection includes such favorites as “The Lake Isle of Innisfree” and “When You Are Old”, as well as two of his longer narrative works, “The Old Age of Queen Maeve” and “Baile and Aillinn”. It traces the poet’s artistry from his early days as a dreamy, late-romantic poet into one of the most individual and visionary voices of 20th-century verse.

Would you try another book from William Butler Yeats and/or William Sutherland?

Yes, anything by Yeats

The narrator could have learned how to pronounce the many Irish names, such as Cuchulain, Maeve, Sidhe, etc. The many mispronunciations were distracting. Also the sound quality was not very good

Could you see W.B. Yeats: Selected Poems being made into a movie or a TV series? Who should the stars be?

This audiobook includes only early poems published up to 1914. It leaves out the last 25 years of Yeats career and most of his greatest works. If you are looking for an audio of representative works by Yeats, I would recommend that you choose one of the other options.

good but the audio quality

the story's read were great but the audio quality shifted throughout the reading. from good to bad and back the other way.

This work was beautifully written. While I don't agree with his religious views or lack thereof in these works; I do appreciate his writing. My only critique might be that the narrator, while working wonderful with other works made this piece difficult to focus on.

Yeats is amazing--Sutherland does him dirty

This is one of the laziest recitations of great poetry I have ever encountered. Yeats' work is important and beautiful, and Sutherland did the bare minimum here. He mispronounces one name after another, reads with no inflection or emotion, and just phones the whole darn thing in. Don't bother with it--read Yeats to yourself, or find an audiobook version by someone who treats the material with respect.

English narrator: wrong on a couple of pronunciations

But it’s no big deal—just saying. Maybe there’s a different way of saying Sidhe (like “she,” I’ve always believed.)

Yeats would be appalled !!!

As a lover of Yeats poems... I was appalled at the wretched delivery of these wonderful writings !!!