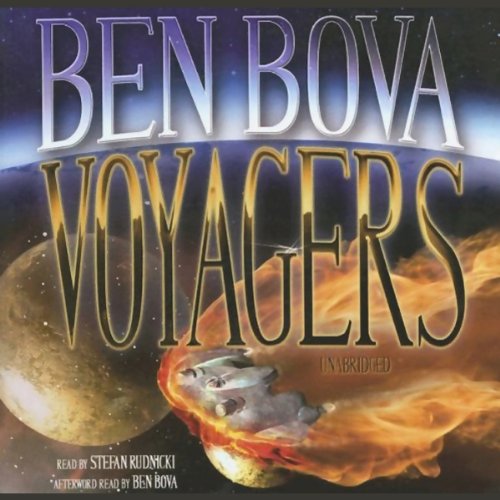 Stoner knew. The fiery object hurtling toward the Earth was an alien spacecraft. But the world might never know. He was trapped in an iron cordon of secrecy, for the discovery had shattered the world power balance, setting off a brutal struggle for supremacy that raged from the sacred halls of the Vatican to the corridors of the Kremlin and the Pentagon. The forces of fear and treachery would use any weapon at their command, from mind war to sabotage, to keep the world in darkness.

Aided by a brilliant Soviet linguist and a lovely young student, Stoner planned a desperate mission, a wild, heart-stopping gamble to preserve the legacy of the star voyager for all mankind.

"The most plausible and convincing account I have ever read of how the human race might really react to first contact." (Analog)
"Voyagers marks the return of one of SF's pros to his favorite subject: first contact. The bureaucratic politics of space is classic Bova...and the sense of awe when Stoner finally gazes upon an alien is pure art." (Chicago Tribune)

Not Quite "Rendezvous With Rama"

As someone who views Arthur C. Clarke's "Rendezvous With Rama" as the ultimate novel about man's first contact with extraterrestrials, I tackled this novel by Ben Bova eagerly. A strange object approaches the Earth from somewhere "out there," and the powers of Earth scurry about to find out what it is and what it means. It is Bova's vision of what the political, social, and theological ramifications of such an event might have been in the early 1980s. Very little of this book is about the alien itself; rather it focuses on how the U.S. and Soviet Union jostle to be the first to make actual contact with the visitor. Written seemingly with a movie screenplay in mind, the novel really never met my expectations, and it falls well short of Rama.

Although I have heard Ben Bova's name mentioned for years and years as a great sci-fi writer, I never made the time for one of his books until this one. I chose Voyagers because I wanted a Bova book and because it was featured on the front page of Audible.

I thought this story was terrific. The listener must bear in mind that it was written in the early 80s (probably late 70s), so the technology is laughable, but it seemed very realistic to me. I advise you just to read it as a period book and it will make perfect sense. I loved it and I recommend it to anyone that likes hard SF.

Future Past 4 Bova Fans Only

This is one of those books (or series of books) that you have to put yourself into the mind set of "alternate reality" when you read it as it is about a future with a Soviet Union and giant pre-hubble telescopes (in space) and mainframe computers in the future and CRT monitors in the future... You have to read it with the same mindset as you would if you were watching old TV shows like Space 1999 or early Star Trek or if you were reading 1984... I went through all three of the Voyager novels as the characters were likeable and the plot was interesting, but I wasn't overall impressed. This was my first Ben Bova novel and I found some of the character's philisophical waxings were on subjects that are quite tired these days - where they may have been cutting edge 20 years ago. If I were looking for a Good Sci Fi novel, I'd look elsewhere. This book is probably for long term Ben Bova fans.

This is probably the most plausible first contact story. If you know what SETI stands for, you will enjoy it. Could this strange object be natural? Could intelligent beings travel across interstellar space? Would they be friendly? Would they want to contact us? Would the government try to keep it a secret? Would there be panic in the streets? All of these questions are considered in this novel with plenty of political intrigue and a love story thrown in. The narration by Stefan Rudnicki is excellent. Listeners should realize that while this is a new audiobook production, the original novel was written before the fall of the Soviet Union.

this book only qualifies as being science fiction because of some unkown "comet" heading toward earth.....otherwise it's seven brides for seven brothers......people sitting around talking to eah other about irrelevent things....trying to fill pages.....i can barely stand it....

This book was excellent in many respects. The reality on how our governments would react was quite convincing. The paranoia, top secret classifications, the fear, all was quite convincing. I loved the main characters as well, I felt as if I knew each one of them personally. The book was well read and once it was finish, it left me wanting more. If I had to rate this particular book I would have to give it a ten plus.

I've read the series and must say the best is in the first two books. A surprise in Sci Fi in that I didn't expect finding a wonderful love story. The story sees it way through three great stories which are filled with adventure. I would recommend the series as fun reading for the summer.

Great read. This is book one of the Voyager series. Can't wait till the rest is offered on Audible.

This book caught my attention because I am a science fiction fan. I was hoping that the story line would be more about the space craft and what they found out about it.

This story is only a tiny bit about the UFO and mostly about what would happen on earth if we discovered a UFO. The author dives into the politics, world vision and discerning opinions of nations and individuals.

At times the story wandered and lost me but overall I enjoyed it.

While this book purports to be a realistic analysis of human reaction to a first-contact situation, the first-contact aspect occupies a remarkably small portion of the overall text. The bulk of the book is dedicated to the sexual (and occasionally romantic, but mostly as seen through the eye of out-of-control sexuality) exploits of various deplorable characters. This might itself be interesting enough except that the book is wildly sexist and the models of human sexuality and romance drawn here are disturbing at best, with the majority of the sexual interactions bordering on rape. Throw in a little bit of completely stock, stereotyped cold-war paranoia and a Russia taken directly from the cheesiest of 80s thrillers, and excise the bulk of anything even approaching a plot and you have little to commend this book. I did continue through to the end so that I could feel as if I was reviewing it from a complete perspective, and it did get a little better toward the end. For one, the distance from the worst of the sexual exploitation, which primarily happens in the first half to two-thirds of the book, helps suspend the distaste in the romantic relationships that eventually come out. For another, the book does, toward the end, begin to garner some semblance of a plot, ultimately presenting what feels like the first third or so of an interesting story. I would almost have been compelled to continue with the second and third book had I had even the slightest interest in any of the characters.

The reading by Stefan Rudnicki is reasonably decent, with accents provided where necessary and characters easily distinguishable. However, toward the end of the book especially, a second (uncredited on Audible) narrator comes in who made me cringe each time she read due to her wildly inappropriate emotional presentation, all characters coming out as whiny children, mad, venom-spitting, seething men or dreamy new-agers.

Definitely two thumbs down from me.

This is the first book in the Voyagers trilogy - and it's all three books that tell the complete story. Fortunately, Audible has them all available. Even better, they are all narrated by Stefan Rudnicki, a maestro at accents who tells the entire tale with great skill and compassion.

The trilogy tells the story of Keith Stoner, an astrophysicist and ex-astronaut who is the first to discover that the solar system is being visited by an extra-terrestrial spacecraft. Voyagers I covers the story of Stoner going out to space to rendezvous with the alien visitor. In Voyagers II we find that Stoner was fundamentally changed by the experience. In Voyagers III, we see how these changes impact upon the whole evolution of the human race.

It's a great story, classic science fiction by one of the literary heroes of my youth. I recommend the entire trilogy.

The story is set in a time before the collapse of the soviet union and when computing is still in its infancy. However this does not detract from the story, it's still a good listen and worth your time.