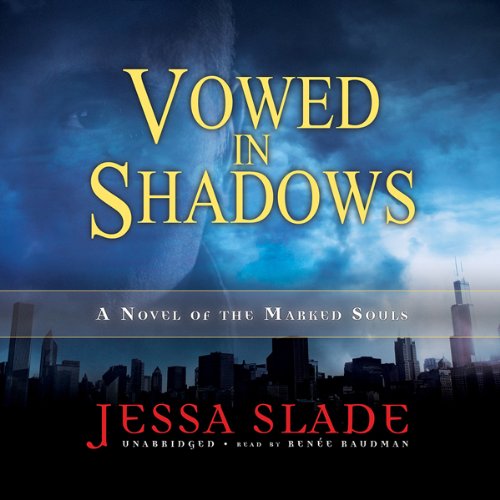 The war between Good and Evil has raged for millennia, with the Marked Souls caught in the middle. Now two lost souls will tip the precarious balance.

Possession by a demon cost Jonah Walker his faith, his humanity, and his wife. Once a righteous missionary, he endures immortality with nothing but a body for battle and a bent for retribution. But his last devastating fight left him wounded beyond healing, and his only chance to redeem his soul lies with a fallen woman.

Thrust into a wicked underworld of shadows and sin, Nim Hamlin can’t believe her wanton ways as the “Naughty Nymphette” enthralled a demon—and a damned saint. The world she knows doesn’t deserve deliverance. But the touch of this good man’s hand holds an unholy allure—and she’s never been any good at resisting temptation.

As darkness gathers in the sweltering Chicago summer, Jonah and Nim must conquer the demons of their past to face even fiercer monsters in one last assault. But first they must put aside their doubts and disbeliefs and let their passion for each other burn through the shadows to ignite a furious power.

If you could sum up Vowed in Shadows in three words, what would they be?

What was one of the most memorable moments of Vowed in Shadows?

Nim and Jonah in the weapons room when she helps him discover a new weapon.

What does Renée Raudman bring to the story that you wouldn’t experience if you just read the book?

Would you listen to Vowed in Shadows again? Why?

I quite enjoyed the romance stories of the first three books in this series. They all sort follow the same path but it is a quite pleasant listen. They are not outstandingly different but I was just looking for a satisfying listen and this fit the bill.

Have you listened to any of Ren??e Raudman???s other performances before? How does this one compare?

I love Renee Raudman as narrator. She is just as good at this series as she is relating the Kate Daniels series.