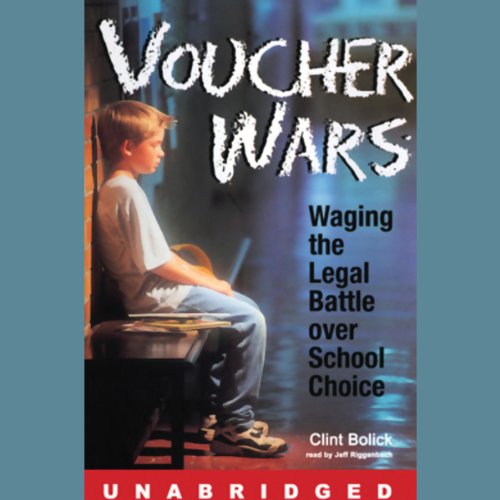 Millions of American children are trapped in failing public schools because their parents lack the money to send them to private schools or move to better public-school districts.

In Zelman v. Simmons-Harris, the most important education case since Brown v. Board of Education, the U.S. Supreme Court in June 2002 opened the door for school vouchers and other forms of school choice. In Voucher Wars, Clint Bolick recounts the dramatic 12 year struggle to finally give families a choice in education. Because of the untiring work of Bolick, the man who began and nourished the legal battle for school choice, underprivileged children now have an opportunity for a better education.

As the central figure in the legal battle over school choice, Bolick tells the story from the inside. Beginning the journey in Milwaukee with choice pioneer Polly Williams and going on to Maine, Vermont, Florida, and Ohio, he shares his personal insights, frustrations, and triumphs.

Bolick also shows how the education establishment, particularly the teachers' unions, fights at every step against parental choice in education. In spite of the enormous power held by the opponents of school choice, Bolick and his colleagues triumphed.

The battle for school choice isn't over, so Bolick provides a useful blueprint of the road ahead and describes how to apply the lessons learned from the past struggle. Supporters of school choice can take these lessons to heart as they face the challenges ahead.

The freedom movement generally has a lot to learn from the school choice movement. The battle for school choice is a textbook example of how to reduce the power and scope of government. Bolick shows people who want to expand liberty how to do so, through not only words but also actions. Bolick's account of the school choice battle shows how confidence, determination, and perseverance can triumph in the end.