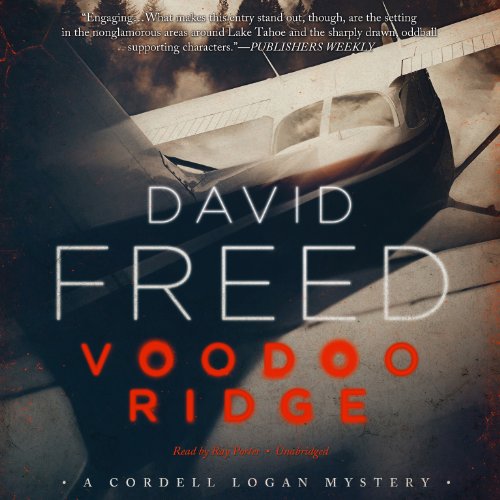 In 1956 a plane bearing mysterious cargo takes off from a small airport outside Los Angeles and disappears into a raging storm. Nearly 60 years later, while flying over the Sierra Nevada, retired military assassin turned civilian flight instructor and would-be Buddhist Cordell Logan catches a glint of sunlight on metal and spots what appears to be an aircraft wreckage. His life will never be the same.

Logan and his beautiful ex-wife, Savannah, plan a reconciliation in posh Lake Tahoe. But upon landing in the Ruptured Duck, his beloved aging Cessna, Logan agrees to put those plans on hold when he's asked to help guide a search-and-rescue team to the remote, mountainous crash site. The team finds not only a long-missing airplane, with the mummified remains of its pilot still at the controls, but something much more recent and far more sinister: the body of a young man, shot to death only hours earlier. Someone has beaten the rescuers to the site and will clearly stop at nothing to profit from what the plane was carrying - including kidnapping and threatening to kill Savannah if Logan refuses to help them carry out their getaway plans. With the clock ticking and the love of his life in peril, Logan is drawn into a vexing vortex as personal and potentially deadly as any he's ever known.

Voodoo Ridge is a fast-paced, adrenaline-fueled thrill ride filled with the kind of unexpected twists, full-throttle action, and wry humor that won Freed's Flat Spin and Fangs Out, the first two installments in the Cordell Logan mystery series, rave reviews and a legion of loyal fans.

Another A+ Cordell Logan story

David Freed's books about Cordell Logan, former special operative turned failing flight instructor are always well written. They have a good plot, meaningful action, snappy dialogue. Logan is a great character- fierce, flawed and funny. This book is a good one in the series. You won't be sorry spending g your credit. Also, it has Ray Porter as the reader. Porter has become one of my favorites. He's perfect for this kind of material. If you like him here, you should here him in his performs the Bobiverse series by Dennis Taylor.

This is a very sad story involving the greater good. Poor Logan has some difficult choices here, and there will be loss no matter what he decides. This one is bound to bring tears. I am not sure why these stories are so engaging since he doesn't bust up like special ops fellows are wont to do. There is some action by the end, but most of the story is characters and real-to-life behavior. I guess it's about the mystery; the details are all here; there is no Deus ex machina in it, and we, with Logan, are left with several "if onlys". Life isn't as simple as kill the bad guys and the good guys go home.

Laughed, cried, was captured by the story.
Ray Porter should perform all this author's books.
He seems to feel the author's words.

Witty and insightful view of the world

I positively loved book 2 and 3 of this series. My review lacks 5 stars, because I keep thinking I can't over-rate books. The main character is incredibly likable and I value his constant reflections. His mysteries are good, but they are not as valuable as his constant insights. I highly recommend this if you are more interested in character development than intrigue, though both are absolutely present. If I were to say something critical, it is that the mystery is more intense than it should be/could be. Can't say more.

Disappointing. In a Brutal Way.

LOVED the first book - in this one, I feel Freed had gotten into a storyline he felt jeopardized his series, and got out of it brutally and simplistically. Ray Porter's narration is great - otherwise I would have stopped listening. This one's a dud. Save your credits.

What would have made Voodoo Ridge better?

A story! The author definitely has writing skills but deciding on a plot that makes any sense would be something he needs to try in his next effort.

What was most disappointing about David Freed’s story?

There seemed to be lots of filler and too little in the way of an actual story. And I won't give away a major part of the book, but there is a death of an important character which seems to have no real point.

WOW! Where to begin? His voice is great, all by itself. He reads sarcasm as if it's a part of his normal way of communicating. He does different voices quite well and i will look for him as a narrator in my future Audible book choices.

Oh, wow, this is so different from the first in the series, and so, so much worse. I had been looking forward to a continuation of the flight school, bringing in interesting characters and situations but, no, this one involves nominally a lost airplane mystery but mostly it's about kidnapping and revenge. There are countless references to Logan's past as a super-secret black ops agent and all the things he learned (boring). I guess that's all to lead up to his giving up the flight school at the end of this book and considering going back to being a black ops agent (more boring)......certainly ending my reading any future installments.

I am so disappointed. This one barely rated 2 stars, but I gave it 2 because of the good narration. Ray Porter did what he could, but the material was so bad, his hands were tied.

Would you try another book from David Freed and/or Ray Porter?

The first two books were lots of fun and good escapist who-dunnit with characters i could like. If i wanted George Martin's version of killing off main characters, well at least Martin's tempo would fit better than this story. The banter stays light for a decidedly nasty plot twist.

Would you recommend Voodoo Ridge to your friends? Why or why not?

Not really. I hear the 5th book gets back on par with the first two. i will finish off the book. I came looking for Escapism and ran into an all powerful author who could be as crazy as he wants to be, regardless of the reader/listener's enjoyment.

Buying the next one in the series now - love Logan

So far 3 for 3. I have liked all of these books and without writing a long review, can't explain all the reasons I really like Cordell Logan. The stories and the people keep me interested. Ray Porter does a fabulous job!

Good at first but disappointing in the end

The first book of the Cordell Logan series was great, unusually good humor, restrained and believable violence, interesting characters. Then, the second disappointed a bit with a story too close to the first one and a bit rushed but showed promise nonetheless so I was eager to get to the third in the series. There was the return of Ray Porter as icing on the cake. The story starts with a great setting, evolves in a procedural novel with an intense investigation that kept me listening in my car after arriving home. Then the story starts to drag, the auxiliary characters are flat, the story meanders without clear direction, but I still had hope. Then, close to the end, came the big let down. Difficult to explain without spoilers so let me just say that I do not like when the author keeps telling us how smart a character is while he/she is acting plain dumb. It made me question if Logan was ever a member of the Alpha team or a pretender much lower in the Greek alphabet. I am in doubt now if I should give Mr. Freed another chance. Perhaps a return to Silva, Lee Child, or Flynn.

This was the second time I've listened to a book from this author and narrator combination and I enjoyed it as much as the first. The main character Cordell Logan is a great invention and I hope to listen to more of him with this wonderful narrator. There is a second book in this series, of which this one is the third, but the second one is narrated by someone else. For me, Ray Porter is Cordell Logan so I haven't yet bought the second book. I may give in cos I love the format so much.

The story was ok to good, but the whole thing is supported by the great character that David Freed wrote along with the brilliant narration of Porter.

"Because it's a giant cake, that's why."

Great story, fast action, excellent characterisations, quick dialogue, all packaged together and given back by a superb narrator. What more can I say? Buy it and enjoy.