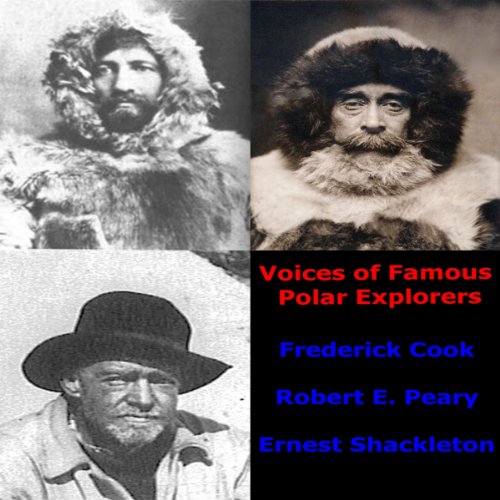 Frederick Albert Cook (June 10, 1865 - August 5, 1940) was an American explorer and physician noted for his claims of achieving the first summit of Mount McKinley, in September 1906, and having reached the North Pole on April 21, 1908, which would have been a year before Robert Peary. Both claims have been largely discredited. Later, Dr. Cook was a founding member of the Arctic Club and Explorers Club. Robert Edwin Peary, Sr. (May 6, 1856 - February 20, 1920) was an American explorer who claimed to have led the first expedition, on April 6, 1909, to reach the geographic North Pole.

Peary's claim was widely accepted for most of the 20th century, rather than the competing claim by Frederick Cook who said he got there a year earlier. More recently, historians generally believe Cook did not reach the pole, and there are grave doubts that Peary did, though he may have been as close as five miles. Sir Ernest Henry Shackleton (February 1874 - January 5, 1922) was an Anglo-Irish polar explorer and one of the principal figures of the period known as the Heroic Age of Antarctic Exploration.

In January 1909, as leader of the Nimrod Expedition, he and three companions made a southern march which established a record-farthest south latitude at 88 degrees 23' S, some 97 geographical from the South Pole, the closest convergence in exploration history up to that time. For this achievement, Shackleton was knighted by King Edward VII on his return home.

Voices from the past...

Very short audiobook with brief recordings from the three mentioned polar explorers. The recordings are preceded by a biographical note of each explorer read by a present day narrator. Would only recommend this material if you already know the history behind these men and are curious to hear them speak, a link to the past.