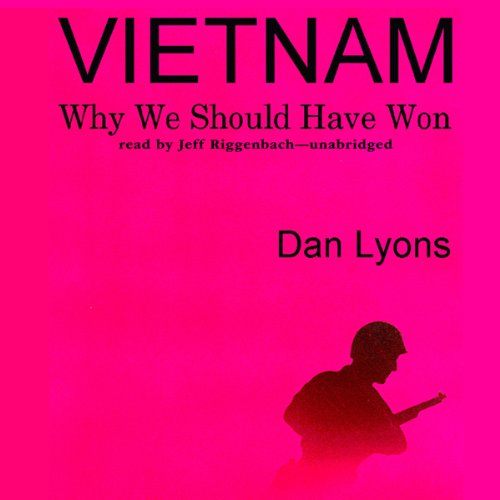 Dan Lyons resigned as Dean at Gonzaga University to become the free world's leading advocate of winning the war in Vietnam, visiting there 17 times from 1963 to 1975. His 500 daily radio and TV broadcasts, plus his nationwide weekly columns and debates on college campuses, reached millions every week for 12 years. In this book he presents a brilliant exposé of why we lost the war, and why and how we should have won. Lyons debated Daniel Ellsberg and Jane Fonda, went fact-finding with Ross Perot, was consulted by Richard Nixon, and numbered among his friends leaders such as Chiang Kai-Shek. General Westmoreland once called him "the biggest hawk in the United States," while Newsweek fumed that Lyons was a "sulphurous advocate of rightist views." No one is more adept at putting Vietnam in perspective.
©1993 Dan Lyons (P)1993 Blackstone Audiobooks

Very informative. I was able to draw a huge number of parallels between Vietnam and Iraq and therefore better understand what is going on today. The anti-war sentiment used in the election cycle as a political weapon is identical between the two wars. The media and liberals are both leading Americans to false conclusions in both wars. America never would have pulled out of Vietnam if we would have understood the truth about it and that we could have won it easily. The "quagmire" thing was totally an invention of politics, not millitary leadership - whose hands were tied by our liberal politicians. We will never pull out of Iraq if we know how there really is an evil ideology we are fighting. We are winning. It is worth it. Iraq is a huge strategic advantage for protecting the U.S. at an amazingly low cost in relative terms of life and treasure. The Iraqi's, like the vietnamese, want the freedom and prosperity that we will bring them IF we stick it out for the long haul like we did in South Korea (we still have 30,000 troops there and they only recently achieved a stable gov't in 1992 (40 years!))

Puts into perspective all the issues, with a great step by step account. Has made me re-think why the war was fought and understand the politics and reasons for the outcome.

The truth is out

This book informs the public what all of us Viet Nam Vets knew all along. The war could have been won if the U.S. Press and Media would have wanted us to win it.

If you?re a history buff and want something less pedestrian than usual, this is for you. It presents the ?other? side of the picture for the Vietnam War. A side not often let speak in our anti American politically correct world. And please, I don?t want to sound like Ronald Reagan here, but as a previously serving British Officer (never having served in any such horrific engagement), and a student of military history this recording offers a very different and well researched view point than the accepted one by people that were there.

Although the micro management of the conflict was reprehensible, and behaviour on both sides quite disgraceful, the recording is not an apology for the event, but more a clarification of the evidential truth that ?popular? history can so often misplace when written close to the pain of the time.