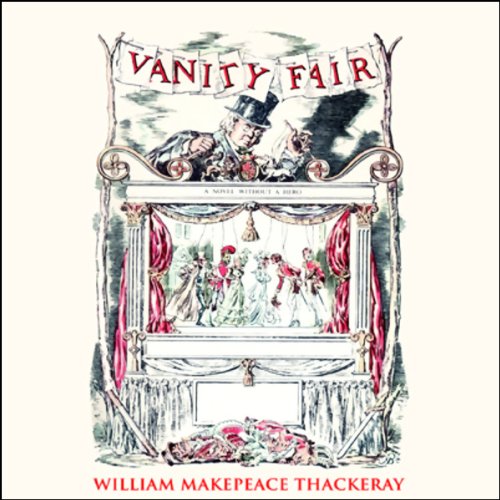 Now a major motion picture, Vanity Fair is one of the greatest of English novels, a vast satirical panorama of a materialistic society and a landmark in the history of realistic fiction.

Generally considered to be his masterpiece, Vanity Fair is Thackeray's resplendent social satire that exposes the greed and corruption raging in England during the turmoil of the Napoleonic wars. Subtitled "A Novel Without a Hero", it traces the changing fortunes of two unforgettable women: the scheming opportunist Becky Sharp, one of literature's most resourceful, engaging, and amoral heroines, and her foil, the faithful, naive Amelia Sedley. Amid the swirl of London's posh ballrooms and affairs of love and war, their fortunes rise and fall. Thackeray's subversive, comic attack on the hypocrisy and "dismal roguery" of an avaricious world resonates 150 years later with implications for our own times.

Thackeray's prose doesn't always come across easily in narration; his sentences can twist and turn leaving the listener rather unsure of where he started. But, overall, the narrator does an incredible job with the book. Davidson has a distinct voice for each character, and some of them are brilliant. He captures Thackeray's ironic and sarcastic tone wonderfully. I highly recommend this audio version, although the experience can be improved at times by having a copy of the book at hand, to read along through some of the more intricate bits of prose.

Davidson is a brilliant narrator. He is easy to listen to and renders the characters extremely well. I can still hear Rawdon Crawley's voice as if I am again listening to the book, when I observe things that pertain to his character's viewpoint on life, it was so well done.

Davidson appears to understand Thackeray's world view quite profoundly, as reflected in the excellent drama with which he reads each character.

The book is spellbinding and I am only sorry it was only 31 hours. I could have listened to much more.

I highly recommend this version of Vanity Fair.

Frederick Davidson is a master!

It's true that Thackeray sometimes goes on and on; but what fun! Davidson (who also reads as David Case) perfectly captures the tone of Thakeray's gentle and on-the money satire of the social foibles and pretensions of the time. His ability to give a clearly distinct voice to each character makes listening particularly rich and easy to follow. He makes the two main characters -- Becky Sharp and Amelia Sedley -- absolutely come alive. My selection of books to buy is highly influenced by my admiration of this superb narrator.

There could not be a better marriage in fiction or fact than the one between Thackeray's scintillating text and Frederick Davidson's delivery, lightly ironic and detached with the occasional moment of real pathos (the unforgettable Waterloo battle scene), as if the author himself were speaking. I loved this more than any other audiobook I have read - at 29 hours it was way too short, never dragging for a minute. Character and incident abound, but the moments of "editorialising" that Thackeray occasionally allows himself are like nuggets of pure gold, and throughout Mr Davidson is the ringmaster of the great fair.

Great story, great narrator, his droll accent captures Thackeray's wit. It's long, but worth it.

I wish I hadn't waited most of my life to read this. The narrator is one of my favorite and the book is fantastic. The characters are well drawn and the plot has surprises and unexpected turns. One of the biggest, best surprises of the year for me! I love Frederick Davidson, the narrator and this book is a great vehicle for him.

What other book might you compare Vanity Fair to and why?

It has some similarities to Dickens but the plot is tighter (probably because it wasn't serialized, but not sure).

Have you listened to any of Frederick Davidson’s other performances before? How does this one compare?

Yes, I love him and loved his Day of the Jackal and Dickens and many others. I look for books he narrates.

A very amusing, witty portrait of English society in the 19th century. The actor doing the read is hilarious, adding an acid sarcasm in his voicing of the characters.

The only problem with Vanity Fair is that it is very long, since it was written for serial publication and Thackerey, who was a broke aristorcrat, was paid by the word. As much as I enjoyed it, I was desperate to get to the end.

Although I love this book, I would never buy another audiobook read by Fredrick Davidson. His voice is extremely annoying to me. He inflects each sentence up at the end, as if each sentence were a question. I should have paid more attention to the reviewer who describes Fredrick Davidson's voice as "sarcastic" - his voice does sound sarcastic, in the worst most affected way, his sarcasm takes away from the great irony and humor of the book. Besides his performance, which I don't like, his voice has a naturally grating tone to it.

I’ve got to Mark this as a DNF. I absolutely love the classics but this is one I struggled with. Although some of the satire was humorous, I just found the storyline tedious. It did not capture my attention at all and I struggled with the 20+ chapters I did read. I tried sticking with it but was so bored I couldn’t see wasting any more of my time. I already regret the time I did spend.

I really enjoyed the first three sections of the book, but when it came to section four, I could not understand what else the author would have to say about the story for 5 more hours. I thought 3 out of the last 5 hours of listening could have been cut completely out and the story would have been better for it. All in all, I am very glad I can say I finished it, and the story really is of merit, but I wished the end had not dragged on so.

an absorbing and very witty read

Vanity Fair is a terrific read. Despite being very long the story bowls along a a great pace and one never loses interest in the many characters, which are drawn with great wit, affection where merited but without any gushing sentimentality. The style of the book lends itself perfectly to being read out loud, and Frederick Davidson's amused and ironic tone, and his perfectly paced and articulate delivery, greatly adds to the listening pleasure. I was sorry when the book ended and I am sure I will listen to it again. Very strongly recommended.

Recommended by this listener.

A wonderful listening experience. Very different from other novels written by Victorians. Thackeray was a genius well acquainted with the psychologies portrayed in his characters. It really tells us something about the human condition and not only from the perspective of Georgian Britain; it also echoes present day England in some ways. I really enjoyed the narration too. A great story. Please do take a chance and listen to it.