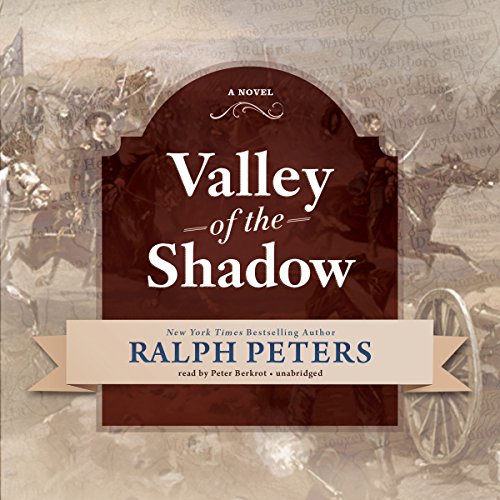 Valley of the Shadow

New York Times best-selling author Ralph Peters returns with the third installment in his award-winning series on the Civil War.

In the Valley of the Shadow, they wrote their names in blood.

From a daring Confederate raid that nearly seized Washington, DC, to a stunning reversal on the bloody fields of Cedar Creek, the summer and autumn of 1864 witnessed some of the fiercest fighting of our Civil War, in mighty battles now all but forgotten.

The desperate struggle for mastery of Virginia's Shenandoah Valley, breadbasket of the Confederacy and the South's key invasion route into the North, pitted a remarkable cast of heroes in blue and gray against each other: runty, rough-hewn Philip Sheridan, a Union general with an uncanny gift for inspiring soldiers; Jubal Early, his Confederate counterpart, stubborn, raw mouthed, and deadly; the dashing Yankee boy-general George Armstrong Custer; and the brilliant, courageous John Brown Gordon, a charismatic Georgian who lived one of the era's greatest love stories.

From hungry, hard-bitten Rebel privates to a pair of Union officers destined to become presidents; from a neglected hero who saved our nation's capital and went on to write one of his century's greatest novels to doomed Confederate leaders of incomparable valor, Ralph Peters brings to life yesteryear's giants and their breathtaking battles with the same authenticity, skill, and insight he offered readers in his prizewinning Civil War best sellers Cain at Gettysburg and Hell or Richmond.

Rather than give an historical view of the conflict in the Shenandoah Valley in 1864, Mr. Peters uses the thoughts, analyses and feelings of the generals (mostly) as they advance their armies in this very bloody conflict. It really works and he has no qualms about showing the foibles and miscalculations of many (Jubal Early for example), the skill of others in spite of their less than admiral personalities (Custer, Albany’s own Phillip Sheridan) and true heroes (future presidents McKinley, Hayes) and John Brown Gordon and James Ricketts. Not bad for a guy who has called for the assassination of Julian Assange, being anti-Israel is anti-Semitic [count me in] and that Barack Obama was “date raped” by Cuba, Iran and Russia. The year this book was released he called President Obama a “total pussy” on Fox News. I’m surprised he’s not an Ambassador.

A great way to spend a long drive. Very educational and engaging. Well written and performed.

Again the story delivered is second to none in overall entertainment and history. I don't usually read books in a series because the feel of predictability ruins the book, but Peters delivers again. The characters and emotion of Grant, Lee, Sheridan and Early make for a compelling story. None are too over the top and the way the overall progression of events makes it easy to follow. Another great book. Highly recommend.

I have read 2 of Peter's books and there is a common thread: everybody is pissed off. Almost all conversations are in anger. All private thoughts are about anger at others. My one take away of Peter's view of the Civil War is that it was a time when everybody hated everybody else. Otherwise Peters captures the true events of Valley campaign.

Narrator was weak and poorly spoken with respect to southern voices! Story fits in nicely with the authors prior two books on this area of the civil war.