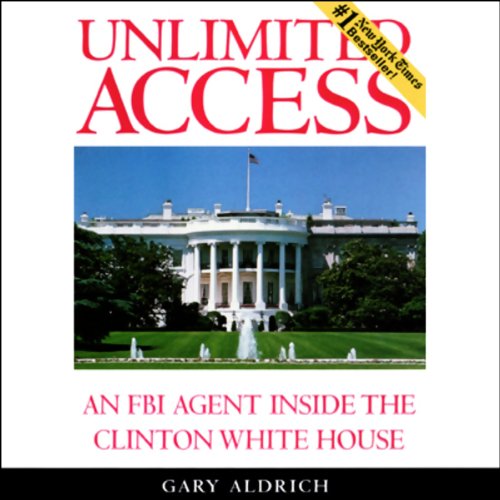 As one of two FBI agents posted at the White House to perform background checks on appointees, FBI Special Agent Gary Aldrich intended to close his eventful career in peace and dignity. But what he witnessed during the Clinton administration left him deeply troubled, then alarmed, and finally, so outraged that he felt compelled to leave.

Unlimited Access is Aldrich's electrifying expose of a presidential administration with a great deal to hide and willing to put America at risk to keep it hidden. Aldrich describes how a comprehensive security system that had been perfected through six presidencies was systematically dismantled by the Clintons so they could bring friends into the White House who otherwise would have been barred by legal problems, some prosecutable. A New York Times best seller.

Hillary is a bad girl

Well written and very informative about the Clinton years. A must read for anyone who wants Hillary be the first female President of the USA. This book erased my last doubt about the ongoing Email investigation.

A Must For Anyone Voting Clinton!

Shocking! Revelatory! A MUST READ!
I've read a lot about the Clinton's but this goes above and beyond! So thankful I read this BEFORE the election!

I knew they were unethical but this sealed the coffin for me. Unbelievable!!!
Great book non stop . Will recommend to everyone I know.

Thorough, In Depth view of The Clintons in Action

This book is truly a reflection of the behavior of the Clintons that
Could only be revealed by an insider with truly Unlimited Access to
The White House where the Clintons were in residence. Any other
Attempt to describe such things would only be speculation by a Press that would normally attempt to launder the activities of this
Couple. I have recommended this book to several friends especially
People who tended to base their voting preference in the wrong direction.

How this book is not better known and read makes me wonder. It is a quick read, partly because the reader ends up astounded by the goings on in what should be America's greatest home. Anyone considering how to vote in 2008 should read this first; it is a first hand account of the abuse of power and the hidden lives of those who might have us respect them.

good story but the tecordi,g just stopped before ending. the library's copy provided the ending.

After listening to this I could never vote for Hillary Clinton

These people have the lowest morals and do not belong in the White House. Donald Trump is not a great choice but it's much better than her

OH BILL WAS A BAD BOY

It's hard to know where to begin. This is all stuff we know. Bill Clinton is a born politician. We all know he lies all the time. We know but we love him anyway because he's so darn charming. What is less well known is what an unpleasant person Hillary is. I've heard stories about Hillary from a friend who worked at the US Embassy in Paris so I wasn't surprised. Whatever. I voted for him but not for her. I was disappointed by his lack of conviction and moral fiber. He never knew what he thought until he read the polls. Whatever. We survived. Our democracy can survive a Bill Clinton. We almost didn't survive the Shrub. With any luck, Hillary will not be an issue in 2016.

As applicable today as in the late 90s

Read this in 2000 and was astounded. Got to meet the author personally at a speaking event. Eerie parallels to Hillary's server and conflict of interest donations from foreign governments. I wish more Americans took the king of info in this book more seriously. We can't elect another Clinton.

Read Miniter or Patterson Instead

If you are a moderate to liberal Clintons-Hater this is not a good book. There is no real discussion of the horrible policy flaws (see Richard Miniter's Losing Bin Laden or the Buzz Patterson Books for that) and not even than much contact with the Worst Couple. Aldrich is a real dyed-in-wool 1950 style "reactionary" who mainly complains that the Clinton White house was filled with rude, filthy, disrespectful people. He almost gives anti-Clintonism a bad name by complaining about past drug use, homosexuality or the rejection of "Christian values". We need to hate (and stop) the Clintons for the real damage they have caused (and will cause) not for the clash of values between a G-man and Hill and Bill's hippie and hillbilly administration.

Not a fan of the Clintons , but this is a truly ludicrous account - it is so petty it is beyond belief - no wonder we have trouble with security if this is the standard of agent we employ.

Has Unlimited Access put you off other books in this genre?

none - it is laughable.