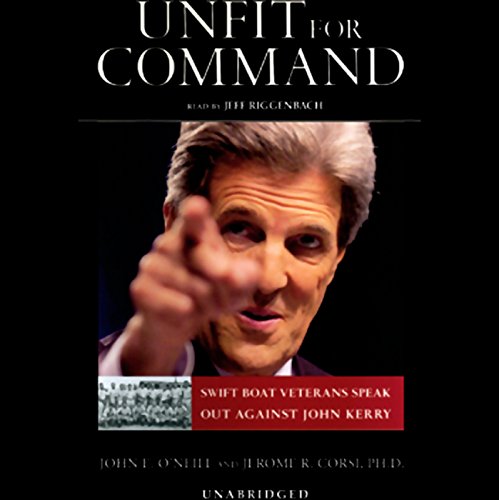 In their new book, Unfit for Command, John O'Neill and co-author Jerome Corsi bring together the words of more than 200 Navy veterans who served with Kerry and who feel it their duty to tell why John Kerry is unworthy of the presidency.

In 1971, John O'Neill, the officer who took over John Kerry's swift boat in Vietnam, returned home from Vietnam only to realize that the man he served with, John Kerry, had become a leader of the radical group Vietnam Veterans Against the War and was slandering his fellow veterans as war criminals. O'Neill debated John Kerry on The Dick Cavett Show in 1971, successfully demolishing Kerry's accusations against his fellow troops in Vietnam. Unfit for Command reveals a John Kerry you don't know, the true John Kerry whom his political image makers are trying to hide. But the veterans who served with him know better, and, in Unfit for Command, they tell their story.

This book clearly outlines a struggle for truth that has been ongoing since the early 1970s. In the absence of any denials or lawsuits from Senator Kerry, I believe "unfit" is too kind. More than 200 veterans who served on the swift boats back up the charges.

Kerry doesn't act like any River sailors I knew

In my 2 tours with the Marine Corps with the 1st MAW on a mountain over Danang harbor we met a lot of river boat and coastal sailors. They were a very close knit group, straight up, and bravely aggressive when the chips were down. Many returning Nam vets protested the war and most of us understood why. It was a right they earned. But these protests were of the illegality of the war. That was a valid argument. However, slandering fellow comrades to gain political recognition was not. And then to become one of the political hacks that sent us there as a career appears strange. His political record resembles the saw/razor grass we dealt with over there. It blows in whatever direction the wind does but you still get cut up when coming in contact with it. We had our "politically minded" officers as well. They were a nuisance, a menace to combat troops, and were always concerned with their "fruit salad" array of ribbons for the cocktail parties in D.C. These guys are dead on the mark. The spin doctors who haven't a clue are pretty vocal about this. In this time of international terrorism, we need leadership not honored in pictures by our enemies in their own memorials. I never met any sailors from river, coastal, or ground security units that failed to support each other, Marines, or anyone in need. They were tough, loyal, and great people to hang with. But they, like anyone in our history, can get mighty riled up when some mediocre cowhand straps on a gunbelt and swaggers into Dodge City bragging about their last gunfight with Wild Bill Hickock or the Earps. It usually doesn't help when this cowhand is at the bar buying drinks while talking trash and Hickock and the Earps walk in through those saloon doors to clarify a few points of honor back on the trail. Even if one tosses out this whole Vietnam thing, let's look at Kerry's record as a politician during some fairly volatile events. Hmmm...I'm not too impressed.

I have listened to it twice now, and enjoyed it thoroughly. It's not written in an irresponisble manner, but written methodically and carefully.

The book has nice narrative flow. It really begins with the story of the last Swift Vet reunion, and the resentment towards Kerry which has been brewing for 30 years. It then travels back in time, and traces Kerry's carreer, both is 4 months in Vietnam, and his anti-war years afterward.

People complain about the content of the book, but 90% of it is Kerry contradicting himself. (He has given so many speeches, biographys and accounts of his service that many are diametric opposites. So I guess when Kerry calls this book a "Pack of Lies" he is refering to his own stories?) I did not find the piece to unfair, just critical.

Also, the narrator is great, with a military-tough voice.

Whether or not you agree with their conclusions or motivations, the authors raise important questions about Kerry's four months in Vietnam. Amazingly these questions have been entirely ignored by the mainstream media. Was he a war hero or just a tireless self promoter? I've certainly drawn my own conclusions from this book and other sources. I do not understand the outrage, since this is not any more one-sided or illogical than what Michael Moore and others have put out in this election year.

Interesting that Kerry and liberals want to bash this book as one guy's opinions. Actually, the book states facts that can be verified! Kerry's account of Vietnam cannot be backed up with facts--only what Walter Mitty wants to imagine happened.

It's hard to believe Kerry and one or two others are tellng the truth when it is very different from what 200 people who were there are saying. Also, the 200 people are backed up with facts. Someone is lying and it is obvious that it is not the 200 Swift Boat Vets.

Don't read if you're voting for Kerry

You'll have to change your vote. Some issues like personality and Kerry's motives are debatable, but most of what O'Neil writes is verifiable and condeming:

Kerry lied, under oath about the atrocities committed
Over 200 of Kerry's fellow swifties condemn his presidential bid

Kerry met with the North Vietnamese DURING the Vietnam war

Kerry Lied about being in Cambodia, and repeated the same lie in several articles.

The writing style is direct, descriptive and effective. Reading the other reviewers who have given this book no stars, I really wonder if they have actually listened to it.

You can't handle the truth!

If you really read/listen to this book you will learn the truth about John Kerry. Kerry tried to block the release of this publication because he knows the contents would expose who he really is and would hurt his chances of winning the election. Take an objective listen to these historical facts. If you are a Bush hater you might as well look elsewhere. Your mind is already made up. In which case a selection of fiction from Michael Moore, Al Franken or Richard Clarke would be a better choice. If you want the real truth about John Kerry's (short) war record and what happened after give this a listen.

The book lays a clear pattern of John Kerry only looking out for himself and trying create a war hero image for his future political life. Additionally, it clearly explains how he gave aid and comfort to the enemy during a time of war. He encouraged a culture that told our returning warriors from Vietnam that they were criminals which was wrong.

If there was a challenge to only one action or two by Kerry in Vietnam, then the book could could be dismissed. But this book exposes questions about all of the actions of John Kerry.

John Kerry believes that his actions in Vietnam should be considered for him to be President. Therefore, people should evaluate his performance from both sides and decide if he is capabable of being the Commander in Chief.

Well written with factual documentation, based on other reviews I had read/heard, I wasn't expecting such in depth documentation. Regardless of beliefs, I believe it is something to read to get a different view of a potential presidential candidate.

I've never in my life seen such a fervor to subvert a book as I have with this one! I couldn't find it in any book store despite its bestseller status and was thrilled when I found it here. How odd that so many books have come out criticizing the president, but one book comes out against this person and the country turns communist! I would recommend this book just to find out what is so damaging that no one wants objective readers to see.