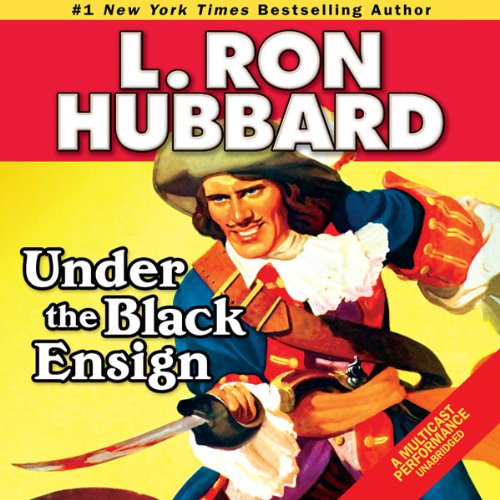 Under the Black Ensign

Long before Captain Jack Sparrow raised hell with the Pirates of the Caribbean, Tom Bristol sailed to hell and back Under the Black Ensign. That’s where the real adventure begins.

Bristol’s had plenty of bad luck in his life. Press-ganged into serving aboard a British vessel, he’s served under the threat of the cruel captain’s lash on his back. Then, freed from his servitude by pirates, his good fortune immediately takes a bad turn...as the pirates accuse him of murder - and leave him to die on a deserted island. Now all he has left are a few drops of water, a gun, and just enough bullets to put himself out of his misery.

But Bristol’s luck is about to change. Finding himself in the unexpected company of a fiery woman and a crafty crew, he unsheathes his sword, raises a pirate flag of his own, and sets off to make love and war on the open seas.

Experience the crack of a whip, the clash of swords, and the roar of the ocean as the audio version of Under the Black Ensign delivers high adventure on the high seas.

“The ever-present soundtrack is never distracting and...lends a richness to the imagined picture.” (AudioFile)

©2007 Galaxy Press (P)2007 Galaxy Press
"This is a gem in American pulp fiction, in all its campy glory. The full-cast performance, complete with sound effects, only enhances its appeal." ( AudioFile)

This short adventure story from the golden age of fiction is the type of tale for which the phrase "ripping good yarn" was first coined. Performed like a radio play (multiple performers, background sound effects) and reflecting social views far ahead of its time, this story was an absolutely pleasurable way to pass a few hours.