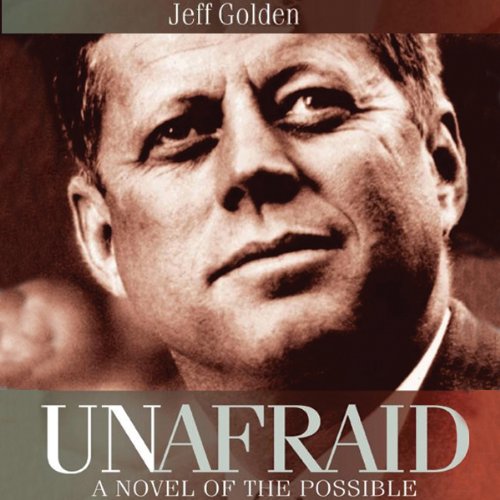 Two dates burn fiercely in the memory of millions of Americans: November 22, 1963, and September 11, 2001. These two tragedies bracket Unafraid, a story grounded in a simple question: What if the fatal bullet fired on that sunny Dallas afternoon had veered three inches off target? Unafraid lays out a compelling answer, rich with the public adventures and private dramas of 20th-century icons—from J. Edgar Hoover to the Beatles—played out on a transformed world stage.

At the center of this parallel history is a leader who blows the sides out of conventional politics with the simple belief that the primary reason idealistic goals are “impossible” to achieve is that we have needlessly decided that they are. With a tiny imaginary spin of history’s wheel, Unafraid opens the gates to an America of realistic hope and possibility.

©2008 Jeff Golden (P)2010 Blackstone Audio, Inc.
“What an exciting, clever, imaginative book! And more, what an insightful, important one. This is the Great Read you’ve been looking for.” (Neale Donald Walsch, author of Conversations with God)