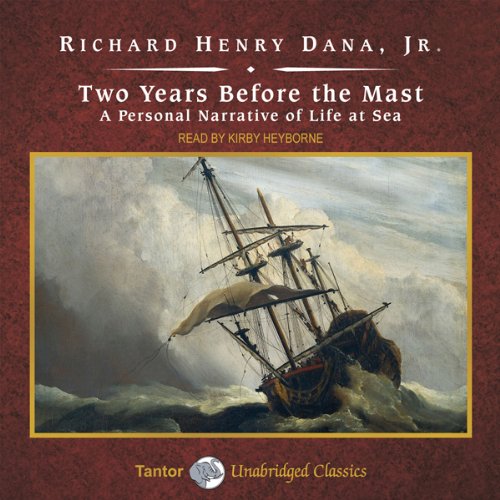 Two Years Before the Mast is a book by the American author Richard Henry Dana, Jr., written after a two-year sea voyage starting in 1834 and published in 1840.

While at Harvard College, Dana had an attack of the measles that affected his vision. Thinking it might help his sight, Dana, rather than going on a Grand Tour as most of his fellow classmates traditionally did (and unable to afford it anyway), and being something of a nonconformist, he left Harvard to enlist as a common sailor on a voyage around Cape Horn on the brig Pilgrim. He returned to Massachusetts two years later aboard the Alert (which left California sooner than the Pilgrim). He kept a diary throughout the voyage, and, after returning, he wrote a book based on his experiences.

Recognized as an American classic, Two Years Before the Mast was published the same year that Dana was admitted to the bar.

The one piece of advice I would offer if you intend on listening to this book is to download a sail plan of a early 19th century brig. Dana's descriptions are so frequent and detailed that if you don't familiarize yourself with it, most of it will be meaningless. I gave it three stars for that reason alone. Other than that there are some fascinating parts and stories contained in this book. Many great descriptions of early California. All in all a good listen.

A Memorable Adventure From the Past

This is a true life adventure of two years of the life of an American sailor in the 1830's. This is an American classic that that I feared might be dull and monotonous. Instead it was a lively tale of travel and danger.
The author was a student in Boston who developed problems with his eyes and could not pursue his studies. He decided to sign on as a jack tar sailor on a ship bound for California round the horn. Living a sailor's life for two years.
The life of a sailor was hard labor day and night. The moments of adventure and drama were interspersed between long periods of the boring, confined life of a sailor aboard ship. Many of his diary entries read "The same." The author's ship, The Pilgrim, was engaged in the hide trade. A long trip around Cape Horn brought them to California. Once there they traveled up and down the coast from San Diego to San Francisco swapping trade goods for cattle hides. The reader is given a trip to a foreign country as he reads about the author's travels. In Mexican California status was based on the color of your skin. At the bottom were the Indians who provided the labor for the white skinned descendants of the Spanish conquerors. The Castilian dialect was cultivated as another sign of status. The coastline and the desert were the landscape of the author's travels. The author rode everywhere he went in California. They had very many horses and they would ride them at a gallop and when they were tired stop and pick up fresh horses. The rush of the wind atop a running horse with the smell of the sea in the air was one of many invigorating images contained in the book.
The author quickly learned the Spanish language and had many stories to tell of the people of California. As a sailor he mingled with the laboring class and became particularly attached to the kanakas. These were people from the Sandwich Islands/Hawaii. The kanakans were susceptible to illnesses common in the white population. The author helped to save the life of a kanakan friend by making sure he got medicines from the ship that another kanakan would not have been given.
Between the boring times were some vivid memories. The power of a Captain of the ship was made clear to the author in a brutal scene. One of the common sailors shot off his mouth to the Captain just at the wrong time. The Captain shouts his orders and the sailor is seized up. His shirt is ripped off and he is tied with his arms out face down on the bulkhead. The Captain takes a piece of thick rope and whips the sailor screaming at him that he will be his slave. Finally the sailor screams for the Captain to stop. The author thinks to himself that this is the way it is on ship. If you oppose the Captain, first it is mutiny then it is piracy and you swing for either one. The author later became involved in the anti-slavery movement.
Another moment was one of great beauty. When they went back around the horn it was winter in Antarctica and they got into the ice. In the pack was an iceberg of enormous size. It towered over them and the shape and color were a miracle of nature. The center of the iceberg was a deep indigo and as it got to the edges it was blue and then white. It moved slowly and great cracking sounds broke the quiet that hung in the air. A once in a lifetime experience for everyone there.
I could go on. I enjoyed the book very much. The author kept a diary of his trip and used that to write the book. There are dates scattered throughout the book. The narration was understated and moved with a good pace. The author's writing has some interesting differences that reminded me of the difference in time. I recommend it as an interesting journey to another time and place.

A sailor myself for more than three decades (1964 to 1995) I enjoyed hearing Dana's stories from the days of "Iron men in wooden ships."

Damn thing starts over at the begining everyday.

Would you try another book from Richard Henry Dana and/or Kirby Heyborne?

Yeah I like the sound of the voices. It is a little "without emotion" however I prefer that over more excitable readers I have heard lately.

What other book might you compare Two Years Before the Mast to and why?

I would say this falls right in line with Marten Lawrence by Jack London. Marten always talks about his time at sea but never really describes it.

Yes, Although it is hard to comprehend what a 1834 American talked like. I needed to stop the book to google things like sea bisques, Sloping the mass and tarring the galley from tip to stern.
I still haven't figured out what they used for paint.

I liked the story, and an understanding of how long it took to get to California in those days. also the detail of life at sea.

The damn thing starts over every time I open it and wont link across all my devices.

I love Two Years Before the Mast--it's a fascinating historical account of the real way that merchant sailors lived. The thing that bothered me about the narration is that the reader doesn't know how to pronounce many of the nautical terms--foresail mainsail, leeward--which is essential to an effective reading of this book.

What disappointed you about Two Years Before the Mast?

This audio book will not replay from where you stop it and it starts over after chapter 13 every time. I tried every audio format and none worked. If you have an iPod Classic do not buy this book from Audible. I purchased it from the iTunes store and it played perfectly.