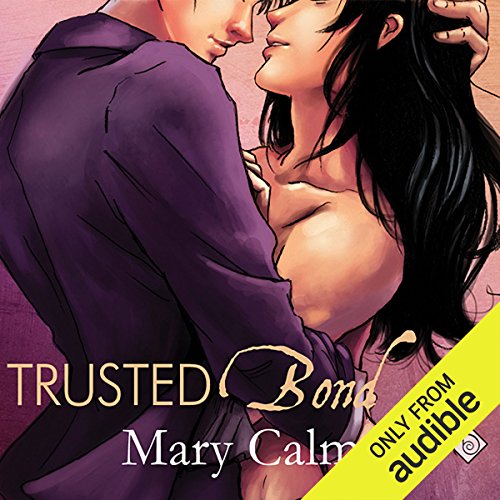 Jin Rayne is having trouble adjusting to the new life he’s supposed to love. Instead of adapting to being the mate of tribe leader Logan Church, Jin can't get past the fact that his lover was straight before they met. He's discovered the joy in belonging to Logan but fears his new life could disappear at a moment’s notice, despite Logan's insistence that they are forever, end of story.

Jin wants to trust Logan, but that desire will be put to the test both by a rival tribe leader and by a startling revelation about Jin's existence. At stake is Jin's life and his place in the tribe. If he's going to survive to see Logan again, he'll have to release his fear and freely accept the bond, for only then can he truly trust.

I love this genre and story line and was ecstatic to see the second book here. Unfortunately, I didn't pay attention to who the narrator was until after I had purchased the book. I was all set to hear Sean Crisden, and it was such a let down. I see that the first book has a different audio publisher so this explains the new narrator. I wish I had not purchased this book. Jeff Gelder's voice makes it difficult to follow which character is speaking at times, not to mention the monotone and dull recitation with a decided lack of inflection at times. Another problem is the difference in pronunciation of the special titles and words used here, but this just goes back to the different narrators. There are also several spots in this recording where the book just repeats itself. This just shows a lack in production control and very poor sound editing by this studio apparently. I have been an Audible listener almost since the company's beginning and isn't the first time I have noticed the quality change when audio publishers change and narrators change. Listeners like consistency and we all have our favorite authors and narrators. All in all, it is a great book and if you can get around the narrator, it is a great book in the genre.

What disappointed you about Trusted Bond?

The narration was appalling!

The story itself; as in the printed version, is excellent.

Rerecord the entire thing with a different narrator who listened to the first story.

The story is great (when you read it on your own), the audiobook was so terrible to listen to that I deleted it shortly after chapter 1.

I read the book which was excellent, but the audiobook was PAINFUL to listen to.

If you listened to the first audiobook "Change of Heart" read by Sean Crisden and expect this one to be just as good- you're in for a rude awakening. Jeff Gelder is an awful AWFUL narrator. I got through chapter 1 and part of chapter 2 and couldn't listen to it anymore, I deleted it immediately. In my opinion it's better to listen to the text-to-voice option on your iDevice or Kindle, that's how bad it is.

1.) Monotone, the narration and lines from all the characters sound exactly the same.

There are probably more gross mispronunciations, but like I said- it was deleted shortly after the beginning of the second chapter. My advice, listen to the sample from the first book and compare it to the sample of the second. If the second sounds like nails on a chalkboard to you then don't buy it- because I promise it won't get any better. Such a shame, I'm not even going to consider buying the third audiobook just because it was narrated by the same guy who butchered this one.

I'm a huge fan of Mary Calmes. The Change of Heart series is what made me crazy about her work. I've been waiting for this audiobook for quite some time now and was so disappointed. I've already bought the book on kindle and read it several times so I know the story. I've listened to the first book(Change of Heart) on audiobook several times too. The story is heartwarming, exciting, romantic, funny and interesting. But the narrator Jeff Gelder SUCKS! He obviously didn't read the novel prior to his weak performance. In the first book Mary has a few places where she explains pronunciations and definitions. Jeff Gelder not only mispronounced most of the books unique vocabulary and names. He also was monotone on certain parts. It was almost as if he was bored with reading and everyones voice was the same during regular dialogue. Then during a fight scene he would perk up and everyone would sound a little different. The inconsistency and mispronunciations were so frequent they took away from the book. My advice is to just buy the ebook on kindle or something. Don't waste your money on the audiobook because I know that if my first exposure to the series had been with his voice reading it I wouldn't want to read anything else by Mary Calmes.

I've always had narrators I look to see what book they've read so I can listen to them. But now I'm going to look and make sure Jeff Gelder isn't reading something before I buy it.

I don't think this performan was edited at all.

I am totally absorbed in this story and completely taken with the talent of the author. Clearly Mary knows her characters better then I think they even now themselves (if that makes sense). It is absolutely enthralling to get sucked into such talent. Lol, not to mention I was looking for something like this to listen to thanks to anime withdrawal. I can feel the manga influences throughout the series, even if that was not the intent. For me it is like hearing it instead of seeing it. Any who, it's a very well done series.

But my issue is with the performance. The narrator has a very pleasantly toned voice IMHO. And I liked Logan's voice a lot, that wasn't any issue. No, it was the way it was read. 1) It was so monotoned at times I could have been listening to the male equivalent of Siri. 2) When there was any inflections at all it was not an appropriate time for them to be used. This made it VERY difficult to follow along. - Now I'm pretty easy going and this in its self would not give the actor 1 (I wish it was zero stars) star, however there where some MAJOR flaws - 3) He repeated sentences that he made errors in and they where not cut from the book! Many of them. 4) He repeatedly said words wrong. Completely changing the meaning of the sentence in the process. - This got me thinking what else was he getting wrong. So I got onto whispersync and followed along with immersion reading - 5) He must have had a different book then me. That's all I can think. 6) He reworded whole sentences. Substituting, switching, and replacing words, names, and phrases. 7) He SKIPPED sentences. 8) He SKIPPED a whole paragraph. And this is just the part of the book I followed along with. This book is unabridged (I checked, repeatedly). In retrospect if there is a typo in the book then sayings something other then what is written to improve the telling of the story, I can forgive. But this is horrible.

Really looked forward to this second book in the tri-book series. Again, enjoyed the story very much, but would have preferred that the performance was done with original narrator, Sean Crisden. Eagerly awaiting third book, Honored Vow, in the series....really hoping author will go back to Sean Crisden to narrate.

Way too drawn out...

Looking at the plot in theory sounds like it’s going to be a great read/listen. The kidnapping/mate separation just went on too long. IMO, the first book was far superior. The side stories were more developed, and you learned more about each person.

Also, even though Cain sounded rather like a muppet, by the end of the book it was kind of endearing, and it went with his personality. Sean Crisden is a much better narrator, and added humor when it was called for. This narrator spoke so fast, and pronounced all the key words completely differently, it was hard to follow, especially in the beginning. He raced through every scene, and there was little voice differentiation. I frequently had to stop to figure out who was speaking. It would have been a better read than listen. I think I’m going to pass on the third book.

Will Jin ever trust the bond?

This narrator sucked. Sean crisden the pervious narrator you could tell he did his homework on how stuff was suppose to be said. This narrator did not.

But...what happen to Crisden... It took me a minute to get adjusted to new narrator but other than that...this was a great progression of Jin and Logan's clan, relationship and story. I love when the story just keeps getting better and better, and thier's did.

A good credit. Don't buy, just wait for the credit unless you have book 1, then you might as well get this book and the 3rd one too.

What did you love best about Trusted Bond?

Jeff Gelder is an excellent narrator. People had become accustomed to the equally excellent voice of Sean Crisden, but were unwilling to give anyone else a fair hearing. Besides, I think Crisden can sometimes sound very one note with little color in his voice--other than humor. When he is good, he's at the top of heap, but I think Gelder did a superior job with conveying a character's power.

The close relationships and intimate situations very intense and fulfilling.

Which character – as performed by Jeff Gelder – was your favorite?

Logan Church. His voice was rich and powerful just as one would expect from the leader of a community where domination is everything.

If you could take any character from Trusted Bond out to dinner, who would it be and why?

Domin Thorne would be a witty and interesting dinner partner. There are hinted at depths to Domin that I would like to explore.

Sit back and listen to the deep mellifluous voice of Jeff Gelder charm you and entice you into a fantastic, yet frightening, world.

The book is excellent there's no doubt about that. I was really excited to see that it finally was released as an audiobook and I immediately bought it.

What I found though was less than satisfactory. The narrator read too quickly, like he was rushing through it, and with barely enough stops in his narrations to let things sink in. Not much diversity in the voices nor the tone of voice depending on the mood the characters were in.

Really this was a disappointment especially when compared to the first book narrated by Sean Crisden.

Also in comparison with the first book, the terminology that Mary Calmes uses in her books for the Werepanthers, maahes, semel, reah etc, are read differently too. Don't know if they were read wrongly in the first book or in the second but it'd have been better if they were kept the same as they were in the first book so that at least there would be some sort of connection between the 2 books.

This is an interesting story. Well written and with likeable characters. The narration needs some editing.

truly this series has the worst narrators, the first book was just bearable but this one is so monotone, slow with long unneeded pauses that makes the listening awkward and the whistling on the S's and T's makes it worse

Whilst I like the story (series) I found the narration was a bit fast at times and it could be difficult to distinguish between the characters.