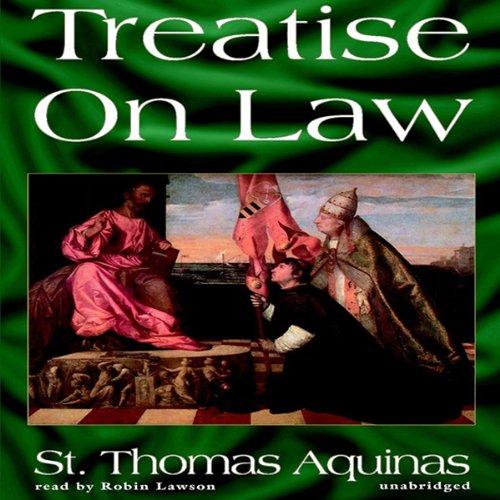 Saint Thomas Aquinas, an Italian philosopher and Dominican friar who lived during the 13th century, was the greatest of the medieval theologians. His writings harmonized faith and reason, which resulted in a Christian form of rationalism.

This treatise comprises questions 90–97 of the Summa Theologica, in which St. Thomas presents a philosophical analysis of the nature and structure of law. Believing that law achieves its results by imposing moral obligations rather than outright force on those subject to it, he proceeds to explore vital questions about the essence of law, kinds of law, effects of law, eternal law, natural law, human law, and changes in law.

Masterful reading of a masterful philosopher

Top-notch scholastic philosophy read by a top-notch narrator. This treatise only represents a fragment of the original source material but is nonetheless indicative of the high caliber of the work.

very well done for a fraction of a work

excellent piece taken from the author's massive work. well thought out and we'll argued from beginning to end

I really appreciate Audible for making this audiobook available. I only wish that it could be updated; it is after all from 1991.

Not a good audiobook

This book would be enjoyed by someone who might have only a passing interest in its subject matter.

What was most disappointing about Thomas Aquinas’s story?

If this was a story that you could follow, or a train of thought to be understood by its explanation it would be a fantastic audiobook