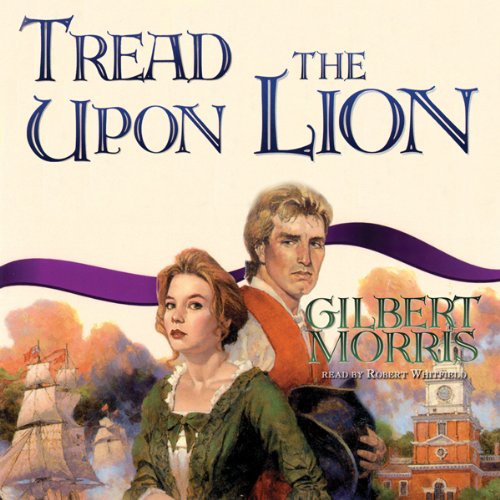 As General George Washington makes a desperate attempt to forge an army that can stop the British from taking New York and defeating the Continental Army, the Bradford family is learning that serving God and serving one's country often calls for great sacrifice. Meanwhile, Clive Gordon, son of Colonel Leslie Gordon of the British army, falls in love with Katherine Yancy, a daring young woman whose father and uncle are patriot prisoners. When Clive crosses enemy lines to attempt their rescue, will he be shot as a spy? Meanwhile, Daniel Bradford fights to save his son Matthew from his old enemy Sir Leo Rochester, but the villain stoops so low as to hire Abigail Howland of the Winslow family to lure Matthew into his evil schemes.
©1996 Gilbert Morris (P)2002 Blackstone Audio, Inc.

An historical novel of lobe, faith, courage and steadfastness. Another combination of a good story and one of my favorite narratives, which has equated to a job well done. I really enjoyed the story being woven with details of the Revolutionary war. And bringing to light that all too familiar theme of countrymen fighting countrymen. If only we could learn to get along.with one another. Highly recommended.

Morris has successfully carried his characters through to the end of this trilogy with aplomb, class, and deftness!

I thoroughly, THOROUGHLY, enjoyed this book and the entire series. So well created and well narrated.

A very good investment of time.

Narration was first rate. I really enjoyed the plot & character development but most of all the Christian message that runs through out. Wish there were more like this!