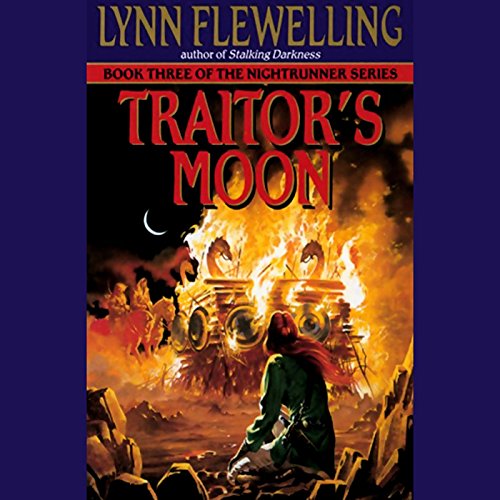 Master spies Seregil and Alec are no strangers to peril. Their assignments, night running for wizards and nobles, have led them into many deadly situations. But sometimes the greatest danger can lurk beneath a traitor's moon.

Wounded heroes of a cataclysmic battle, Seregil and Alec have spent the past two years in self-imposed exile, far from their adopted homeland, Skala, and the bitter memories there. But as the war rages on, their time of peace is shattered by a desperate summons from Queen Idrilain, asking them to aid her daughter on a mission to Aurenen, the very land from which Seregil was exiled in his youth. Here, in this fabled realm of magic and honor, he must at last confront the demons of his dark past, even as Alec discovers an unimagined heritage. And caught between Skala's desperate need and the ancient intrigues of the Aurenfaie, they soon find themselves snared in a growing web of treachery and betrayal.

I loved the first two nightrunner books and was not disappointed with the third.

One thing I love about Flewelling's books is general is that her characters grow and change - sometimes a lot - yet always remain likeable and interesting. I loved where Flewelling took her characters in this book - particularly Seregil - and also enjoyed the introduction of new characters. This series really has a strong "supporting cast".

I found the worldbuilding to be well done, and got a good sense of the Aurenfaie and Skalan cultures (and it was really interesting, having read her other books, to finally see Aurenen).

In short, this was a book I couldn't put down (okay, that expression works better for paper books - maybe I should say I couldn't turn of my mp3 player) until I finished it.

I've listened to all three books in this series, and have enjoyed the the story. I did have trouble getting used to the reader, however. He tended to have a flat voice, and his pronunciation of words was sometimes strange. For instance, usually he pronounced "courtyard" like "orchard", which was strange enough. Oddly, sometimes he pronouned it correctly. Things like this irritated me, but the story was still worth listening to. I think with a more skilled reader the story would have come across even better.

Written by a fan

I have read all 3 books in the Nightrunner series, thought I'd try them in audio format, & I'm very glad I have. I found the mix of action & character development to be a good balance. The reader does an excellent job of conveying emotion, and I like the accents he employs to add variety. The relationship between the two main characters is more pronounced, but never very graphic. I highly recommend the book and the series to anyone enjoying a well developed fantasy world with strong character development.

If you like reading fantasy like Kevin J. Anderson's Saga of the Seven Suns, or the Dune epic, or Robert Jordan's The Wheel of Time Series, or Orson Scott Card's Ender Series, or Stephen King's The Dark Tower Serial you will most likely enjoy this author. Her characters are charming and personal, occasionally annoying, but mostly just very life like. Her motives for people are realistic. In this book especially (not to ruin it) her end game was very true to life. Most people are not bad, it amazes me that in fantasy books they make the dark side so twisted and evil, it usually just comes down to a lack of choices. She makes her villains likable and real, and that is good writing.
Oh, and yeah, the main characters are gay...what series were you reading that this, the third book, surprised you with that?

Enjoyable Fantasy if sometimes too Slow

Lynn Flewelling's work clearly owes a great debt to the work of David Eddings. She even scatters character names from his novels throughout her work as a tribute to him. In book 2, you'll find an apothecary's apprentice named Durnik and in book 3, you'll find a person named Geran. From Eddings, she takes a very slow approach to the narrative, making sure that each plodding day of travel is described. This can be enjoyable or wearing, depending on the listener.

The best thing about the novels is the way Flewelling questions the assumptions about gender and sexuality that bedevil so much high fantasy. Eddings women always let the men do the fighting and the only heroic couples Eddings can imagine are male-female.

Like Mercedes Lackey, Flewelling has strong dynamic women warriors and men who can both wield a sword and love each other. It makes a refreshing change. I was curious about the other reviewers who were made unhappy by having a same-sex couple be at the heart of a fantasy novel.

Fantasy should challenge us to imagine wider and more wondrous worlds. Flewelling is doing great when it comes to characterization, gender, and sexuality, I only hope that she learns to practice a bit more brevity as she develops as a writer.

I found it compelling and absorbing

Would you consider the audio edition of Traitor's Moon to be better than the print version?

I've not read the series, but enjoyed the listen.

Tough question, with the standard two hero types - a cynical experienced older guide, and a novice/apprentice being taught how to deal with the world as imagined by the author. The narration switches between the two, and my alliegance switches with it.

What does Raymond Todd bring to the story that you wouldn’t experience if you just read the book?

His voice has merged entirely into the background of the story for me - which is just about as good as it gets!

I was sorry to hear the series draw to a conclusion, with no obvious dangling threads to draw me on.

I was not overly impressed with plot development through the first half of the book. To that point, the author seemed to spend too much time and IMO got bogged down in the details. In the second half, it caught fire especially with the battle scenes and picked up. I think this is a very average fantasy book.

I have enjoyed the two previous Nightstalker books. Well, once I got used to the narrator's eccentricities and limited vocabulary. His pronunciation of debacle is a total tongue twister and he's never obviously stood on a quay before. That aside, the first two books were cheerful romps through an colourful world, populated by interesting characters, with some truly bizarre names. Unfortunately, this third instalment, went away from this and bogged itself down in a political tale and the description of a culture. When the characters complain of their boredom and chaff under inactivity, I could only sympathise. I will still read the fourth instalment when its comes out in the hope that it will represent a return to night running.

I've enjoyed the first two books of this series, and definitely wanted to listen to the third as well. I found the first part of the book a bit slow - it seemed to take a long time to "go anywhere", and I was getting worried that there was going to be too much focus on the romantic relationships and not much of the detective work / adventure stuff I'd so enjoyed from the earlier books. The tale definitely improves before long, and it is fun to follow the twists and turns. Some of the names take some concentration - it's a bit hard to sort out who is who sometimes, but in the end, it's a satisfying addition to the series. Fair warning to the less open-minded in the crowd: if the thought of romance between people of the same gender is disconcerting to you, you'll want to avoid this book. There's nothing explicit, but it's just kind of assumed that the listener will be "okay with that sort of thing".

I am so happy- seems like I have been waiting forever for this book. I just re-listened to the first two in the series and was wondering if the third would ever show up on audible. I am looking forward to another great listen.