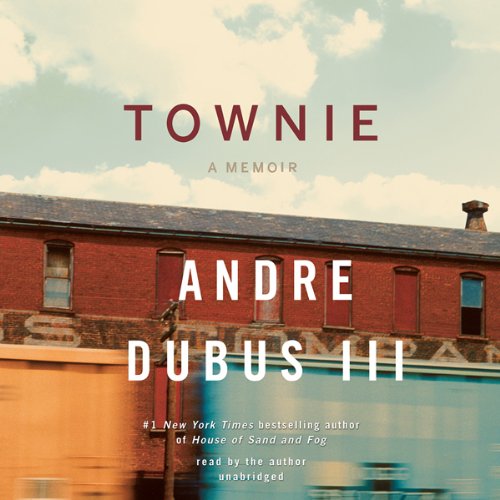 Andre Dubus III, author of the National Book Award–nominated House of Sand and Fog and The Garden of Last Days, reflects on his violent past and a lifestyle that threatened to destroy him—until he was saved by writing.

After their parents divorced in the 1970s, Andre Dubus III and his three siblings grew up with their exhausted working mother in a depressed Massachusetts mill town saturated with drugs and crime. To protect himself and those he loved from street violence, Andre learned to use his fists so well that he was even scared of himself. He was on a fast track to getting killed—or killing someone else—or to beatings-for-pay as a boxer.

Nearby, his father, an eminent author, taught on a college campus and took the kids out on Sundays. The clash of worlds couldn’t have been more stark—or more difficult for a son to communicate to a father. Only by becoming a writer himself could Andre begin to bridge the abyss and save himself. His memoir is a riveting, visceral, profound meditation on physical violence and the failures and triumphs of love.

I have mixed feelings about this book, Dubus 111's memoir. It is raw and naked, violent and gentle and is about redemption. Dubus grows up in the mean streets near Boston. He is of in my generation, a teenager living with the backdrop of Janis Joplin, Jimi Hendrix, the Vietnam War on the television, the movie Billy Jack, Dave Brubeck on the parents turntable and lots available of drugs and sex. His absent father, not there at all for young Andre and his siblings, is always on Andre's mind and in his heart. As an adult, Dubus 111 clearly forgives his father and is abundantly understanding of why he and his sisters and brother were virtually ignored. He quotes his father as saying he felt as though he was "dating his children" since he was afforded only a weeknight and weekend day visitation schedule. I couldn't help but wonder if this contact schedule was self imposed or mandated.
Poverty stricken adolescent Andre turns to violence; is it because of the cultural, interpersonal, internal and familial conflicts he endures? And in the face of his violent acts he strives for clarity. His wish is granted; he comes to believe that all violence just breeds more violence and as he says, it hurts.
Although it makes sense to me that an author would want to narrate his audio book, especially a memoir, I don't think Mr. Dubus' narration does his prose favor. The narration is flat and monotone and although this in a way works, as this is indeed Andre's voice, maybe it's the editing I disliked. His voice comes on and off in spurts, clearly read in random segments so it was mottled in terms of tone, volume and clarity. Overall, I do think I liked this book, and I do so love this author's other works, it just was a bit of a mix for me. I look forward to others' reviews.

I loved this memoir. Dubus zeroes in on the angst of being a poor young man in a single parent household and methodically lays out his life for all to see, moving from a kid who allows himself, his friends, and, most painfully, his family, to be pushed around and bullied at will by others, to his years as a fighter, and one who made a point of interceding on behalf of others' turmoil. Finally, he begins writing in earnest, and through his writing begins to understand his best role in the world. It is heartfelt, open, and honest. I found it difficult at times to hear of the physical confrontations with others, but he redeems himself, both for himself and the reader. Great memoir, highly recommended.

A book of two halves

I really liked this book, and the narration was very good. The only issue I have with it is the author's rather monotonous descriptions of situations. I lost count of the amount of smell references he made to scenes and places and the amount of cigarette smoke references were multiple.
That said, the second half of the book is truly compelling and a real coming of age tale, the first part did take some getting used to for me.

As gripping as his fiction

Although this memoir has elements in common with other memoirs by adult children of neglectful or abusive parents, this is FAR BETTER than Jeannette Walls "The Glass Castle" or Mary Karr's "The Lairs' Club."

It is as good as "House of Sand and Fog" and few works are.
I am an unabashed fan of this author's father and am delighted by this author's own novellas, essays and short stories.
This autobiography touched me in a way that few autobiographies could.

Of course I had "known" the elder Andre Dubus only as he presented himself in his work. I was surprised by the depths of my outrage toward him as I realized how he had neglected the children of his first marriage and how that neglect nearly -- but did not -- destroy his children.

On the whole, this is an eye-opening, triumphant and inspiring autobiography and the son's acceptance and forgiveness of his father allows me to continue to love that writer's work.
I read the NYT review, which praised Townie but said "until it loses traction in clichés about redemption at its very end" and I disagree with this evaluation.

This book deepened my admiration and respect for the younger Andre Dubus and I found the ending cathartic.

Like his father, Dubus is a writer's writer as much as he is a reader's writer.

Despite the elder Dubus' well-known act of heroism and the loss of limbs it cost him, if one is going to compare the two, know this: the younger Dubus learned more from his father's mistakes than his father learned from them.

I look forward to reading more work from Andre Dubus III and I thank him for reading what must have evoked at times painful memories.

As an Austinite, among my favorite lines: "That’s what Texas did to me, took my hatred of bullies and bullying and institutionalized it."

And Andre Dubus III did something for me no other writer has: he eloquently explained to me how the same release found in engaging in acts of violence could be found in writing. Bravo, Mr. Dubus, Bravo!

Painful and endearing and in the end...hopeful

Mr Dubus has created a wonderful, harsh, rawly open read that could only come from his depths...by digging deeper into his being than most of us are willing to even contemplate and examine in detailed accounts of his life experiences from his earliest recollections in his parent's home to the finality of a father's burial. This is not a feel good read but rather an intense self evaluation of chilhood lived in poverty, of human struggle and growth expressed with both quiet composition and understated power. Through out the read, I felt the author's character in his commitment to remain true to his recollections no matter how unflattering to his person and come away feeling privileged to have been allowed to share his journey and life lessons.

What a good memoir about the author of The House of Sand and Fog, Andre Dubus III ! It had all the characteristics that I would look for in a good memoir. First of all, Andre had a tough life ??? a tough childhood. So that gives the reader lots of drama, conflict, and suspense. Andre IS good at describing these conflicts so that the reader really feels them. Then, he has two different turning points in his life that provide him revenge and then redemption. In this way, Andre???s internal conflicts are finally resolved, and it felt really moving to see how these changes manifest in his life.

The only fault I have with the book is that the drama leading up to both of these turning points goes on too long. Before Andre shifts into revenge mode, there are too many times when we see him being bullied and scared. Then, after he starts lifting weights and training as a fighter, there are just way too many confrontations and bloody battles. I already got the point about Andre fighting to make up for all the earlier times he was bullied and couldn???t defend his family or himself! I really think the book would have benefited by shortening these two sections. I almost wanted to give up on it at one point.

My favorite parts were some of those involving his ???redemption.??? When he becomes a writer, his analogy of how clearing his head with writing was as good and better than doing so by fighting was really moving. His marriage and the birth of his kids helped him to overcome his brutal past as well. His description of caring for his kids as ??????a love so large my body could not hold it all, ??? is great. Then when he talks about his dad???s funeral and looks back on his past and we get a condensed view of how far he and all his family have come, well, I thought that was a really emotional ending. He does it by describing a car full of punks who interrupt the funeral briefly. This sets him on a fantasy of following the car as he might have done in the past to beat up the punks. This description is interwoven with the minister at the funeral reading The Lord???s Prayer. It???s like the prayer was for him and how far he and his family have really traveled to be able not to be ???led into temptation??? and for him to be able to forgive his father for all his many shortcomings. It was a great way to put his whole life in perspective and end the book.

Just wanted it to be over most of the time....

I was bored and I didn't get the point. His life is interesting to a point, but not enough to write a book about. And his narration is very monotone and hard to listen to after a while. I wouldn't use a credit on this one.

Although difficult to listen to at times because of the emotional and violent content and the cadence of the narration, I found this memoir to be real, raw and an important vehicle to encourage thought and empathy.

Truly the best audio book I've listened to to date. Being narrated by the author makes a huge difference in believing and "living through" a person's real-life story, and Andre Dubus III made me feel like I was there for all the brutal, but somehow always reflective and hopeful, events of his life. And his subtle, old school Boston accent sounds like home to me. Thank you for sharing your story, and that of your family, Mr. Dubus.

If you could sum up Townie in three words, what would they be?

Andre III, just cuz he's the main character and who you know the most about. I appreciated his insights and growth.

The making of the casket.

It seemed like a very unique read, like it was just a straight-out stream of consciousness but it all flowed so naturally and smoothly. He did a great job of giving sensual cues that let you be at the locale of the scene.