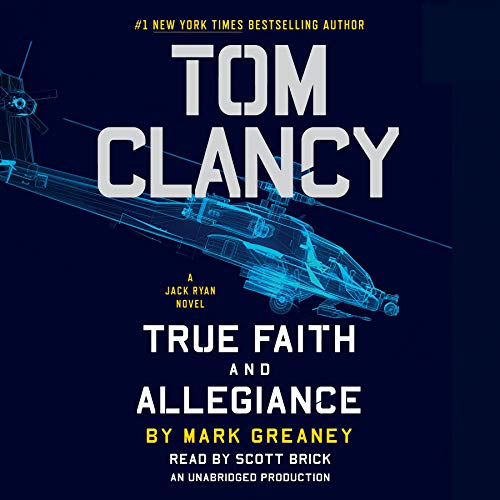 The number-one New York Times best-selling series is back with the most shocking revelation of all. After years of facing international threats, President Jack Ryan learns that the greatest dangers always come from within....

It begins with a family dinner in Princeton, New Jersey. After months at sea, US Navy Commander Scott Hagan, captain of the USS James Greer, is on leave when he is attacked by an armed man in a crowded restaurant. Hagan is shot, but he manages to fight off the attacker. Though severely wounded, the gunman reveals he is a Russian whose brother was killed when his submarine was destroyed by Commander Hagan's ship.

Hagan demands to know how the would-be assassin knew his exact location, but the man dies before he says more.

In the international arrivals section of Tehran's Imam Khomeini airport, a Canadian businessman puts his fingerprint on a reader while chatting pleasantly with the customs official. Seconds later he is shuffled off to interrogation. He is actually an American CIA operative who has made this trip into Iran more than a dozen times, but now the Iranians have his fingerprints and know who he is. He is now a prisoner of the Iranians.

As more deadly events involving American military and intelligence personnel follow, all over the globe, it becomes clear that there has been some kind of massive information breach and that a wide array of America's most dangerous enemies have made a weapon of the stolen data. With US intelligence agencies potentially compromised, it's up to John Clark and the rest of The Campus to track the leak to its source.

Their investigation uncovers an unholy threat that has wormed its way into the heart of our nation. A danger that has set a clock ticking and can be stopped by only one man...President Jack Ryan.

Mark Greaney has produced the best Jack Ryan Jr. book to date. I don't want to drop spoilers into this review, other than to say that the author does a splendid job working in many interesting current issues such as cybercrime and hacking in a way that is suspenseful, entertaining and educating. There is enough tech for the techies without feeling like overkill. What's more, the story is interesting, readable and believable. This book has given me new faith in the jack Ryan series.

2 authors produce this series in biannual installments. The non-Greaney books have been real stinkers, especially for the last few years. I almost quit the series 18 months ago because I couldn't handle it. I'm thankful that I kept reading because this book was a fun read! Highly recommended to new readers as well as those who have read all the Tom Clancy books from Red October on!

It almost goes without saying that Scott brick did a fantastic job with narration. This was an exciting story and I noticed that the volume seemed to go up in some of the more suspenseful scenes.

This book was very much like what Tom Clancy's himself would have written. Fast paced, great character development, really good storyline.

As well as the book being one of the best I have heard lately, Scott Brick is a very good at reading the book and bringing things to light that you may have missed as well as a good parts you would have read but it takes on a new light when listening to the book.

I look forward to the next Clancy book by Mark Greaney. He writes the books in the image of Tom Clancy' works.

All in all I give this recorded book a 5+ stars.

These books just get better and better!

I really enjoyed everything about this
book. The fact that most of the story took place in America was refreshing.

This series was starting to lose me a few books back but I persevered and decided to purchase this book also. This was by far the best written, the best narrated and the best put-together story to date well-done. Thank you

The Best Espionage Thriller of 2016

What did you love best about Tom Clancy True Faith and Allegiance?

President Jack Ryan. He still has his backbone where it is supposed to be

Wow, I just finished listening to Tom Clancy True Faith and Allegiance written by the amazing Mark Greaney, performed as an audiobook by the great Scott Brick and I can say without a doubt that this one is the best Jack Ryan book in the last 10 years and the best Thriller of 2016. Mark Greaney is the #1 New York Times Bestselling author of Tom Clancy Commander-in-Chief and over the years he has written or co-written, alongside Tom Clancy, 7 thrillers in the Jack Ryan Universe. Mark also has an original series of his own that introduces the readers to the infamous Gray Man… I listened to all his books and enjoyed each and everyone of them…

I started Tom Clancy True Faith and Allegiance on December 6th, exactly when it was released and I listened to it for a few hours every day. I wanted to read it all in one stand, because of the fantastic writing, the frantic pace and being pushed forward by the scary plot, but at the same time I treasured the experience and wanted for it to never end.

Without me giving any of the key plot points away, I will tell you that Jack Ryan is back for another heart stopping adventure! Oh, yeah, and it’s not only Jack, since we have the entire Campus team back in action. The story is great and the plot is strong and very well thought out.

Everything starts with an assassination attempt in New Jersey that targets a US Navy Commander and his family as they are enjoying a quiet dinner at a nice restaurant. After that, we are witnesses to a chain of events that makes it clear to everyone that an unknown party is leaking information to ISIS and to other international players about enlisted men and women in the United States… Spies are compromised, soldiers are attacked at home and abroad. Nobody is safe, nothing is secret anymore and the only ones who can find a solution to this crisis are Jack, Dom, Ding and the famous John Clark.

The plot is filled with twists and turns, the action moves at breakneck speeds from the United States to Iran, back to the US and after that to Romania. The story is so good and so brilliantly written that I found myself keeping my breath from time to time… Near the end are some explosive moments, filled with non stop action that will keep you on the edge of your seat… There are guns, terrorists, gadgets, hackers, espionage, tech details about weapons, aircrafts and computers, there are spies, hand to hand combat, training sequences, helicopters, planes, boats, bombs, politics and lots of drama… Beware, once you start reading, you might not want to stop!

Mark Greaney is in my humble opinion one of the best Thriller writers out there and the research he did for True Faith and Allegiance is nothing short of excellent. Some of the action in this new espionage thriller takes place in Romania and let me tell you that Mr. Greaney nailed it all exactly the way it is. Some of you may know that I live in Romania, I’m from Bucharest and even own a house near one of the cities Mark features in this book. Yes, there are hackers there, no, I’m not one of them :), but it was great to see such a big and renowned author doing his research at such a huge scale…

As I mentioned In the beginning of this review, Scott Brick is the one that brings Tom Clancy True Faith and Allegiance to life with his expert and perfect narration. For me, Scott became Jack Ryan after he picked up the series when Michael Prichard stopped recording the Clancy audiobooks. President of the United States Jack Ryan and his son Jack Jr. alongside the ex-Rainbow Six operatives John Clark and Ding Chavez, plus the actual Campus members like Dom and others are like family to me. Scott uses his talent, brings them all to life, switches between accents and employs subtile changes to his voice to make it easy for the listener to identify who is speaking. He even gets right the few words in Romanian. Great job, Scott!

If you are a Tom Clancy / Jack Ryan fan, or just prefer thrillers and espionage, you will absolutely love True Faith and Allegiance! Mark Greaney is getting better with every book that he releases and I want to say a big THANK YOU to him for treating the Clancy fans with the respect they deserve, for not throwing out an empty and short book, but for delivering a masterpiece!

Find more audiobook reviews on theAudiobookBlog dot com
Please vote Yes below, if you found this review helpful or interesting

Got better as it went along.

1) I've listened to a lot of S Brick, and it's nice to see that he has toned down the "campy" narrative. However, anyone not a westerner sounded like a generic "Bibi Netanyahu". I do appreciate that Brick never assumes a falsetto when speaking as a woman as some narrators do.
2) The first 3rd of the book was a little sketchy, one minute they were in Jakarta, then Japan, then some others in El Salvador but really Guatemala and Honduras, back to the states, all over the place. I'd get up to get some coffee and it was always some sketched out new location and new people without any depth.
3) This is not a spoiler, so I will say this carefully. One of the episodes towards the end was supposed to devastate the enemy, however it was silly because the enemy could easily do the same thing in a new place and quickly. That's all I'll say, as I myself hate spoilers.
4) Oh, and I don't think we really have too much to worry about in the USA if all the terrorists wear the black jackets, roomy enough to hide a machine gun, that all the terrorists in this novel do. Some hero is always seeing a couple of black jacketed darkish looking people walking into the garden party, or coffee bar, and sure enough, they yank out a semi-auto.

This is a good tome for jogging, or commuting, but there is no depth to characters, and all the women seem to be (at once) helicopter pilots, marathon runners, scuba divers, medical doctors, and have 8 years in special forces under their belts. By age 3o.

Anyway it's a decent formula, just take headlines for the year and make them part of the story.

It's settled! Mark Greaney needs to be the Tom Clancy/Jack Ryan writer from now on.

Somewhere. I remember being disappointed with Greaney's work on the Jack Ryan series, but it certainly hasn't been in the last four Ryan books he wrote. I read 18 and was pleased enough to purchase 15 , 16 and 17. And Ive read them in reverse order!

I love the series with few exceptions. Scott Brick is perfect here, as was Lou Diamond Phillips.

The plot is fast paced and as believable.as Clancy's original work.

the story intermixed a lot of the headlines from today and is actually set in 2017 if I remember correctly. I enjoyed it very much.

This book from beginning to end was an excellent listen. Scott Brick does a great job reading once again. Definitely a must listen if you enjoy both Jack Ryan characters.