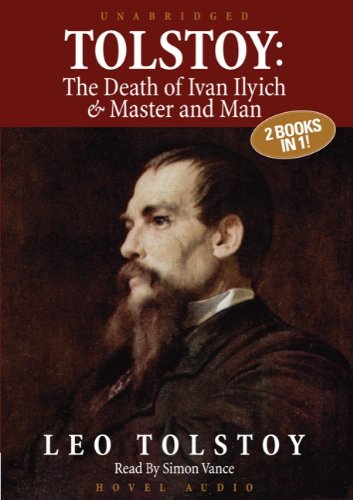 In these two famous short novels, Leo Tolstoy takes readers to the brink of despair. At the end of life, worldly ambition offers no consolation for the spiritually empty soul, but Tolstoy is the master of themes and redemption. He turns his morbid topic into hope, leading toward spiritual awakening. Tolstoy offers his readers a lifetime of perspective on death.

Tolstoy's The Death of Ivan Ilyich is a small book with singular depth of insight. The book was published in 1886, breaking a nine-year literary silence after the publication of Anna Karenina. It is considered to be one of the great explorations of death and dying in all of Western Literature. No author in so few words summons so many emotions into the reader's soul. This masterpiece has been paired here with another of Tolstoy's short novels, Master and Man, which too examnes the human response to mortality. Together these two stories will ultimately offer encouragement to the spiritually hungry.

Perfect blend of material and performer...

I have always loved Ivan Ilyich, but Mr. Vance's narration actually moved me to tears.

Treat yourself to Tolstoy

Both stories, but particularly The Death of Ivan Illyich, are amazingly fresh and relevant. Simon Vance brings the characters to life.

I guess it should come as no surprise that Tolstoy is awesome? Both these stories are amazing and moving and human and wow. First thing I've even read/listened of Tolstoy, I think I need to check out some more.

A Must Read for Everyone

Where does Tolstoy rank among all the audiobooks you’ve listened to so far?

This book has an important message. It is commonly read in high school, but I am happy that I waited until 52 years. I understand the meaning behind the book better than a teenager would because I have witnessed death, watched how others lived their lives, and thus, understand a bit more about the overall message.

If you could sum up Tolstoy in three words, what would they be?

Superb understanding of the human mind.

What other book might you compare Tolstoy to and why?

Of course, Anna Karenina is the masterpiece. Tolstoy understands how people think and why thay act as they do.

Which character – as performed by Simon Vance – was your favorite?

My attention was rivited on the audio and I felt compelled just to sit and listen to the naration was completed.

This narration was one of the best I have ever heard. I am going to now look up what other books he has narrated and get them because of Simon Vance. Really incredible job. Five starts for him. Four stars for the book because it was a little depressing.

If you could sum up Tolstoy in three words, what would they be?

Would you be willing to try another book from Leo Tolstoy? Why or why not?

I would read anything written by Leo Tolstoy!

A feeling of understanding - Tolstoy's statement is not always complimentary to his protagonist moral judgement.

Be the one who rises above in all situations!

Vance is super, but stories are dreary

These two short books are the type of thing they'd assign to you in a literature class and then ask you to write an essay about something like "the meaning of life according to Ivan Ilyich" or ask you on an exam "did the protagonists learn to value life only when they were about to die?" The Death of Ivan Ilyich is exactly about that. We hear about his unexciting and uninspiring life, and what he wants out of it all along, and how it turns out and how he dies, and his thoughts while he is sick and in decline. The part that resonated with me the most is the description of the awkwardness of paying condolences to someone - this indeed was a good description. The "moral" of the story, apparently having to do with what should be the most important values in your life, is quite cliche. The second story, takes some time to set up the death of Vasili Andreevich Brekhunov, a land-owner, but it is his stubbornness and greed that puts him and his worker in danger, and, again, at his very end, he realizes that his wealth is not the most important thing in his life. It seems a bit late, though, since he leaves a widow and orphan, and Nikita, whom he saves as it turns out, has a pretty dreary depressing life, anyway, and would have accepted death without too much upset. The first story is drearier, because you have to listen to Ivan's physical complaints about his illness. I did not particularly enjoy these stories - they are pretty depressing, without much more than that to them. Simon Vance, however, is superb, as always, and I hope to listen to him in a more engaging book.

Very well read and annunciated, the narrator captures the atmosphere well in both stories. It goes without saying that Tolstoy crafts his short stories masterfully, resulting in a throughly enjoyable audiobook