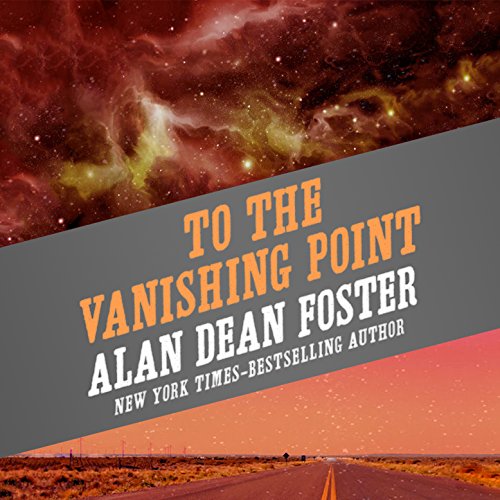 To the Vanishing Point

It was just a boring drive through the Nevada desert...until the Sonderberg family picked up a beautiful young hitchhiker named Mouse and found themselves on a wild, careening ride down the exit ramp to Hell. It seems the entire universe is doomed unless Mouse, a transdimensional alien, can find and heal the dying cosmic Spinner who controls the very fabric of reality. Suddenly attacked by a demonic gas station attendant, axe-wielding rats, and fire-breathing cops, the Sondberg family must become warriors in a now-mystical motor home and battle pangalactic diners, weird worlds, impossible voids, and brain-bending realms of madness. They're driving into a fantastic nightmare to save all creation at the Vanishing Point on the Cosmic Road...which happens to be US Interstate 40!

If you like Alan Dean Foster, I would highly recommend this for a long drive I enjoyed it greatly

One of my all time favorites.

This book has been a favorite of mine since I found a hardbound copy at a garage sale in the late 80's. I bought the book based on the cover picture, and the authors name. I had read and enjoyed Foster's Star Wars follow up Splinter of the Mind's Eye in 1979 so I recognized his name on the cover. However, I was not prepared for what came next. "To the vanishing point" is one of the most creative and engaging stories that I have read through out my life long obsession with books. I have read several books a month since my early teen years so it has been necessary for me to cross genres and seek out new authors to feed my addiction. I have no idea how to classify this book in the grand scheme of book subjects, and that is one of the reasons I love it. I have still not read another book like this after all these years. It is truly one of a kind, and stands out for it's originality across the hundreds of books that I have consumed. When someone asks me for something "completely different" to read this my go to recommendation. It is just an amazing story with outstanding characters. I lost my sight and no longer had access to printed material, so when this book came out in audio format, it was like reconnecting with an old friend. I have reread this books several times over the years and it never gets old for me.

I read this book maybe over 30 years ago and loved it then. Loved it while someone read it to me.

A book I will read, or listen to over and over!

I first read this book when I was a kid, and I have loved it ever since. Every once in a while I'll bring it back out and read it, or listen to it in my truck on long trips.

okay. it was good. I'm not saying it wasn't. it just wasn't my usual genre. A fantastic journey through many differing realities in a Winnebago! original if nothing else! It felt like a child's fantasy though. a bit like Alice in Wonderland or The Magic Faraway tree. but definitely for grown ups. however, remove the swearing and gore and it's a perfect bed time treat for the youngsters!!!! I wouldn't call it science fiction, and I wouldn't call it fantasy. so let's Just say.... science fantasy. oh yeah, the narrative was EXCELLENT