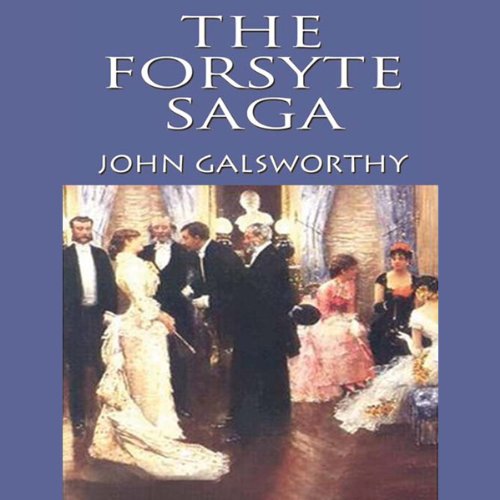 This third novel concludes John Galsworthy's Forsyte saga, the monumental chronicle of the moneyed Forsyte family, whose values are at war with its passions.

In To Let, Irene's son Jon and Soames' daughter Fleur, now both 19 years old, fall in love. But when Jon learns of the past feud between their families, he decides that he cannot marry Fleur. To drive her from his mind, he travels to America with his mother Irene. Fleur now throws herself at her long-standing admirer, Michael Mont, a fashionable baronet's son, and the two are married.

Soames Forsyte learns that his second wife, Annette, has been unfaithful to him, and is left desolately contemplating the sale of Robin Hill. When Timothy Forsyte, the last of the old generation, dies at the age of 100, the Forsyte family begins to disintegrate.

(P)2006 Blackstone Audio Inc.
Narrativa letteraria Western
Mostra di più Mostra meno
"A social satire of epic proportions and one that does not suffer by comparison with Thackeray's Vanity Fair...the whole comedy of manners, convincing both in its fidelity to life and as a work of art." (New York Times)
"[Galsworthy] has carried the history of his time through three generations, and his success in mastering so excellently his enormously difficult material, both in its scope and in its depth, remains an extremely memorable feat in English literature." (Anders Osterling, Nobel Prize presentation speech, 1932)

“He didn’t believe a word of it; on the other hand, it was a form of insurance which could not be safely neglected, in case there might be something in it after all.”

“He” is that man of property, Soames Forsyte. “It” is the funeral service for his uncle Timothy, the last of the generation with which this saga began two books ago. The loss—or rather, the near-complete-absence—of any received, orthodox faith is one of the many strands that make these books such an engaging listen. Wealth, property, social standing, strict observance of the outward forms in society and religion, are the meat of this social satire.

But don’t imagine a mere pillorying of fashionable respectability. There’s that of course, but much more than satire is going on here, otherwise I wouldn't be feeling so much sorrow and pity. This poor family: whether conventional or unconventional each member is, in the end, a Forsyte, existing on the material plane of property and beauty and who, though they may have occasional intimations of immortality (see above), conceive of death as simply the end, and immortality as the passing on of property and beauty to the next generation.

It gives the books an oppressive, claustrophobic atmosphere, as if one were living in a room with too low a ceiling. Yet still one listens all the way to the end because one likes—or at least is interested in, intrigued by—these people. We are all, in our own ways, Forsytes, and as Galsworthy observes in his preface, there are worse things to be. Hence those feelings of sorrow and pity for their stunted world view, a world view perhaps overcome by but two of the characters, and only at the very end.

It goes without saying that David Case (Frederick Davidson) is the perfect vehicle for the tone and cadence of Galsworthy’s prose.

This is a wonderful story and narration, spoiled only by poor editing. Such a shame because it is otherwise so good.

I probably prefer the older Forsytes, but am still eager to keep listening. There was an issue with this book: quite often a sentence or two would be repeated. Some minor editing should be done.

I enjoyed this book the only thing that really bothered me wahs sometimes the lines would be repeated over again from what I just heard that must happen at least 10 times during this reading. But I feel like the story still stands up.

It is a great pity that this excellent reading of the Galsworthy novels has been allowed to go out in its new format without the bother of anyone listening to the original. It comes with occasional advice to 'turn over the cassette because the story continues on the other side' and with numerous retakes of various phrases which should have been edited out - and this criticism applies to 'In Chancery' as well.

To Let: The Forsyte Saga, Book 3

Having thoroughly enjoyed the Martin Jarvis narration of Vol. 1 & 2 of the Forsyte saga, I was longing to hear Book 3 so was forced to find another narrator. What a travesty! David Case seems to be doing a pastiche of Keneth Williams - mocking and mincing throughout. Worst of all is his rendering of the female voices. It has almost spoilt Christmas...

It was read beautifully that I couldn't help myself listening to it. Of course this book was written so well, but the reader make so interesting that you couldn't wait for the next part of the story.